What dreams may come in 'The Shadow Friend', Alex North's follow-up to the best-selling 'The Whisper Man'..?

Leeds-born Alex North’s debut novel (at least under that name) was a certifiable success in 2019, receiving numerous awards, recognition and with the rights bought up by no less than the Russo Brothers (whom you may remember from directing a little film called Avengers: Endgame). About as far away from a cosmic convergence as you could get, The Whisper Man was the story of a town living under the shadow of an infamous legacy. It’s years after a serial-killer – given the moniker of the title – murdered several children and the legend that they all heard whispers outside their window before their abductions. Despite the killer being caught, it appeared to be happening again and the widowed Tom Kennedy is horrified when his infant son Jake starts hearing voices.  A superb mix of suburban dread, with just a sprinkling of the supernatural, The Whisper Man plucked at the familial heartstrings while quickening the pulse and rightly deserved all its recognition.

The Shadow Friend / The Shadows (the title depending on published territory but both editions of the book sporting complimentary covers to their respective The Whisper Man designs) is North’s anticipated follow-up and could be said to explore similar territory (geographically as well as thematically). But if the previous book was about the innate bond between father and son, then The Shadow Friend  is more about the connection between a boy and his school-friends, the tragedy that binds and splits them apart and the grown-up boy’s estranged connection with his mother who has kept secrets ever since. And, initially, at least, the supernatural aspects that merely fluttered around The Whisper Man appear to take full flight here, hanging over each and every action like a timeless, beckoning shroud.

Moving between Paul Adams’ school-days as a restless teenager trying to navigate his future… and the present (twenty-five years later) in which he is forced to look back, it’s a tale of regrets on many levels. Initially part of a small group of friends that experiment with lucid dreaming, Paul becomes nervous about the way fellow pupil Charlie Crabtree is exerting his influence over the group and the direction the ‘experiment’ is taking. Charlie talks of a dark ethereal  figure whom they can all join in ‘The Shadows’ of the local wood – but only if they prove themselves first. When dreams of violence actually appear to happen in the real world, Paul tries to withdraw from the group, but a further tragedy – involving murder – ultimately sends him away from the community he grew up in. Years later, returning to Gritten Wood to care for his dying mother, it’s clear that the urban legends that have grown up around the incident and the disappearance of Charlie Crabtree thereafter still resonate. With further deaths still to come and a dark figure lurking in the trees watching him, Paul is about to unearth some terrible answers about the enduring influence one person can wield…

Like Stephen King by way of Ken Loach, there are undeniably some echoes of ‘IT‘ in The Shadow Friend: the basic idea of a group of restless outliers caught up in something that spirals out of control, being brought together by something inexplicable, powerful and dangerous and the impact it has upon their lives thereafter – also told with the framework of hindsight and a job unfinished. There’s also the influence of the Slenderman legend. But North uses that merely as a starting point to pivot from, introducing the framework of that unseen element but with more of a focus on the very-much-seen consequences. This is not a shadow that brings a group together to defeat it in some cinematic way, it is one that fractures them apart. The emphasis here is on cause and effect – the mistakes made, the paths chosen and a battle between the rational and irrational in trying to form a full picture.

The very real phenomena of lucid dreaming (being aware that you are dreaming while doing so) is one that’s already fascinated me for years and the fact that several characters here keep dream journals resonates as I’ve actually done the same. The subconscious mind and its lack of limitations has often been a rich seam to explore – on screen we’ve also had Jacob’s Ladder, Dreamscape and, obviously, A Nightmare on Elm Street – the latter being one of the best overt horror examples before it became a predictably diluted mainstream franchise). North uses the possibility of a communal dream state to suggest and infer reason for events – though as you gather momentum through the tome, you’ll begin to question that cause and effect and note how some of your presumptions are scuppered along the way.  (There’s at least one moment in the story where you’ll come to a screeching halt and you’ll re-read parts).

There are a lot of characters, the pacing isn’t always even and you may have to keep reminding yourself of when and where you are (perhaps appropriate for a story involving dreams) but it’s likely that many readers will connect with the less than ‘best days of your lives’ experience of school, of peer pressure and singular moments that, retrospectively, totally altered the trajectory of lives. The police investigation that runs parallel to Paul’s own excavation of the past is sometimes there more to offer a few practical course-corrections (or the opposite) as new elements come to light, but it provides a character-link to The Whisper Man in the form of determined detective Amanda Beck who travels to Gritten Wood from the nearby Featherbank in the wake of a connected case. (Like King’s work, there’s that a growing, connective tissue of a wider grand-guignol geography being slowly charted).

The Shadow Friend is more narratively complex than The Whisper Man, not as ‘neat’ and perhaps more demanding in the sense that it produces less of an immediate, instinctual and emotional gut-reaction to the work and more a steady appreciation of its superb growing, atmospheric dread… but it is still constructed in a deft  way that will be appreciated long after reading.

For a book about regrets, you won’t regret reading it.

*Note: In the interest of full disclosure, the reviewer is related to the author. 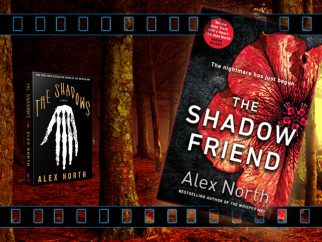