It's the penultimate episode of Penny Dreadful's City of Angels - but is this the calm before the storm?

It has been a hard time for the Vega family, torn in many directions by Magda’s manipulations and their own conflicted priorities – perhaps they need to forget their troubles for a night. Maria and Son Raul  decide to go out for a rare break into the city. But Molly and Tiago have also decided they want a night away from the shadows and Mateo, still in the enthrall of Rio is in the mood for some dancing… so is it by circumstance, coincidence or fate that they all end up in the Crimson Cat with nothing and everything to say. Will this be the moment of acceptance or the spark for something far more dangerous?

Perhaps just as much by the nature of it being the penultimate chapter as much as the skill of writing, Sing, Sing, Sing, the ninth episode of Penny Dreadful: City of Angels, has a constant sense of foreboding. This is increased as almost every member of the Vega family is drawn into one place at one time with tensions inevitably spilling over as anger, frustration and resentment rear their heads. But the masterclass here is that while you ready yourself for something truly bad to happen to our gathered core characters during said confrontation those tensions recede and are, for the moment, becalmed… the anticipated explosion of emotional and physical carnage never happens – quite the opposite. But compelling tragedies are best built by snatching defeat from the jaws of victory and though it feels like compassion and good ‘winning out’ in the short term… that the familial bonds have triumphed over evil manipulations, there’s still an episode to go… and any experienced viewer will know what that indicates. Without not unwarranted cynicism, this feels not like the happy-ending of glad-rags and dancing but a sleight of hand for next week when it’s likely the rug will be pulled, a climax that is far more likely forestalled than avoided.

Though the main cast seems to escape imminent hardship, there is a dramatic ending of sorts with Lewis, who forced Diego to confess to crimes he hadn’t committed, having to watch as his fellow cops form a literal lynch-mob and string the boy up from a lamp-post. Nathan Lane, once again, proves himself a star, this time more through his look of guilt and frustration rather than the witty banter which we heard and saw earlier with a welcome return of Brad Garrett as linguistic gangster Benny Berman.

( And, of course, we mustn’t forget that Peter and Elsa, with the young boys in tow, are also out on the town and just because they aren’t in the night-club – they’re on their way to see Robin Hood at the movie theatre – doesn’t mean they won’t be part of the upcoming convergence as well…)

Once again,  Dormer pulls out the full range of disguises but there’s no Lorenza Izzo as Santa Muerta to be seen – though one suspects the angel of death will feature quite prominently in the finale. And special note must be made of Brian Dennehy, the veteran screen actor who passed away in April who makes one of his last screen appearances as the previously unseen Jerome Townsend, one of the movers and shakers of Los Angeles and who has little but contempt for his son, Charlton (Michael Gladis). It’s yet another forthright and imposing role for the ever-reliable Dennehy, far more than a cameo and the episode is rightly dedicated to him.

It’s been an impressive run and if the finale can hold this quality, this new remit for Penny Dreadful will be worth all its coin… 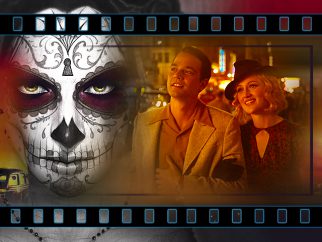