A hotel thriller that over-stays its premise, 'The Night Clerk' is an unfortunate missed opportunity...

Undeniably smart, Bart Bromley (Ty Sheridan) has problems dealing with the world, in communicating what he wants to say and how to say it.  He has a job as the night clerk at a local hotel, able to greet guests and tend to their needs. But in an attempt to speed up his communication skills, Bart has also hidden some cameras in one of the rooms and spends his off-duty hours mimicing the human dialogue and conversations he sees so that he can appear to fit in better.

Unfortunately his cameras catch a murder of a woman who has just checked in and Bart’s off-kilter behaviour catches the eye of the investigating detective who is sure Bart at least knows more than he’s saying. Transferred to a different hotel, Bart finds himself talking to another guest, Andrea (Ana de Arnas), who seems to understand and sympathise with his problems. But Andrea has her own secrets and soon both she and Bart will have to make some hard decisions about where truth and loyalty lie…

The most frustrating thing about The Night Clerk is the fact it has good actors giving good performances in a film that doesn’t quite deserve them. A film that purports to be – and is marketed as  – a thriller, spends too much time setting up its stall for something interesting and then far too little on bringing the disparate pieces together into a satisfying whole.  On one hand aspects of the marketing – including more than one of the original versions of its DVD cover art – introduce it as a tabloid-templated tale of a sinister voyeur caught up in an adulterous plot, but from the start it’s clear the film wants to be more high-brow. But it’s different things in different moments: is it a film noir, a socially-aware tale of communication and illness, a standard cat-and-mouse story or a thesis on inappropriate technology?  It clearly wants us to side with Bart but also wants us to wonder if we’re right to do so.  It skips across details and moments, perhaps  suggesting there’s going to be more here than meets the eye… but, disappointingly, it turns out there’s actually less. The way it frames Bart’s actions as we progress smack less of trying to wrong-foot the audience with missing moments and red-herrings and more of more simple, conflicting, basic indecisions on tone. Ty Sheridan (Ready Player One) and his portrayal of someone on the autistic spectrum is nuanced and interesting, presenting a detachment from the world that Bart is trying his best to bridge. Though Bart’s methods may be highly questionable and not entirely innocent – to the extent of being criminal and creepy – they are not driven by any singular malice but rather an overwhelming imperative to work towards feeling the right things. Movies often struggle to show disabilities but The Night Clerk has the dubious distinction of getting that hardest element right in a film that fails to show such due care and attention elsewhere.

Looking ever more like Mia Kirshner’s younger sister, Ana de Armas (Knives Out!, Balde Runner 2039 and soon to be seen in No Time to Die) as Andrea makes an excellent mix of mascara’d ingenue and potential femme fatale and many of her scenes are perfectly balanced between nuanced empathy and smouldering looks from behind wispy smoke – the film noir inflections in clear sight. The fact that her character says she had a brother who was also on the spectrum makes some of the initial interactions with Bart quietly compelling and interesting to watch, sympathetic even to the point of tenderness… but a moment when the kinship she has with him moves to a more physical level plays as an instantly disturbing plot development – unlikely and ill-advised. Again there for the sake of story, it seems something Andrea would know better than to entice if she genuinely has experience and sympathy with the condition . Yes, we do find out she’s capable of major manipulation and deceit, so some of her earlier story may be a lie, but unless we’re meant to think her entire presence in the story is all part of setting up Bart from the very start – and that clearly doesn’t seem to be the case from other scenes – then the inconsistent behaviour really doesn’t ring true. By the end she’s beautiful, conflicted and intriguing, but more accurately an archetype in the throws of a trope.

The supporting cast is a list of respected, veteran performers merely cashing their cheques for a couple of days’ work. Helen Hunt, once an Oscar-calibre actor but less prolific in recent years, is saddled with a thankless role as Bart’s perpetually-frowning yet taut-faced mother, having barely a handful of lines and adding nothing to the plot except her resume and running time.  John Leguizamo’s detective is blandly one-note, a character you presume will get interesting and central to the plot but one which could have largely been handled by a perfunctory day player for all the importance it ultimately has to proceedings. Worse, the character is largely unprofessional and ill-informed with the script insisting on ignorant dialogue. His questioning of Bart, reasonable in and of itself because he’s a suspect in the original murder, becomes little more than bullying in front of his mother, something that would never be allowed to happen. Worse is his  key comment that Aspergers patients are known to be very violent… which is not only incorrect but reinforces a lazy and ignorant stereotype for the sake of another plot point. Any positives the film achieved through Sheridan’s acting are immediately undone by this sloppy script and its leaning towards tacked-on tackiness.

Director Michael Cristofer, better known for his tv direction and for directing/penning Gia and Original Sin for Angelina Jolie, gives some interesting visuals but very little pace.  Feeling more like a first-draft of a potentially decent story, but one still retaining a raft of plot-holes and awkward wrinkles, it’s a real shame that the film doesn’t deliver on its initial potential of having a smart but desperately awkward character having to navigate his way out of a situation his condition makes him ill-equipped to understand. Instead it’s an outing that even at 90 minutes feels oddly-paced, illogical (a room full of cameras never catches the murderer’s face?) and without any sense of triumph when we get to the end. Indeed, after much build-u to a somewhat obvious revealtion, the last few minutes are something of a head-scratching anti-climax and smack of a massive narrative shrug, an undoing of what has come previously that could be a possible reshoot or just rushed editing… and none doing service to the final piece.  Indeed, if you discount the strong performances from Sheridan and de Armas, the whole outing feels like an over-ambitious Lifetime outing with a reach that exceeds its better-than-it-deserves, name-recognition grasp. Which is a shame because somewhere in there there’s a decent film. 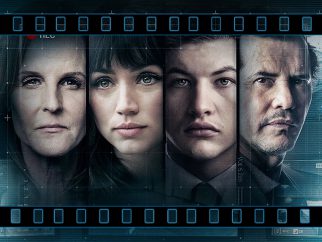