'Access is Power' but who holds the necessary keys in the latest episode of 'Snowpiercer'?

Bruised and battered, Layton continues to try and find a way to balance his loyalty to the tail-end and the job he’s been drafted to do as a detective. Knowing that his talents and insight buy him some leeway he tries to negotiate a way to see Josie, back in the tail, as part of the deal but Melanie resists. However, Layton’s successfully manages to make contact with the man who controls a lot of the black-market on the train and notes the cyclical way that goods move to and fro.  Successfully getting some clues as to why one of the murders originally took place, Layton schemes to subvert Melanie’s rules.

Meanwhile in the medical carriage, the wrongly-incarcerated Nikki is emerging from her ‘sleep’, gradually returning to consciousness, but not without damage. And when her ascent is noted, will she be in even more danger from those who wish her to remain quiet?

Snowpiercer is an interesting idea and an opportunity to talk about social issues and class, but sometimes the latter overcomes the former. Again, the key ‘…on a train‘ elements are less prominent to the story than the idea of a closed-circuit environment with everyone dependent on/ despising the other parts. And even some of the visuals play a little too hard and loose with proportions  (all the sets may be long and thin but its hard to reconcile  the high-ceilinged night-club with the compact and bijou classroom or the the high-class breakfast lounge. It’s also  interesting that Terrence (Shaun Toub), the drug kingpin, makes exactly the same analogy that I did in last week’s review – that the train is simply an apartment block or skyscraper turned on its side and he notes that, in his role as janitor, he actually has far more access and potential power than some of the self-interested but oblivious tenants.

Connelly’s Melanie remains icy and elusive, a lesson in poise and cool and clearly operating a very specific, singular agenda despite her outer commitment to the ‘eco-system’ she enforces. Diggs’ Layton is the agitator to that system and so far, three episodes in, he’s providing the necessary questions and grit to the well-oiled machine, though his investigations seems hampered by elements designed simply to slow the plot. The supporting cast – and for such a contained show, it’s growing by the episode – also excel and it’s a solid idea to have each episode’s ‘cold’ open be narrated by a different member of the train, noting their own perspective.

One other thing of note, to those of us who think that the elusive Mr. Wilfred is probably long gone from the scene and most likely dead… as well as Melanie clearly creating Wilfred’s supposedly ‘live’ speech from recorded fragments (bit of a giveaway?), sharp-eared viewers will note that the voice in question is actually provided by one Sean Bean (the veteran Sheffield-born actor) who is  notorious for playing characters who end up being killed Though it might be hilarious if he did a reverse-Game-of-Thrones, defied expectations and actually became a regular for the confirmed second-season..

Though there’s a warning that the show is intended for mature audiences, there’s nothing as risque as it seems to want to be. Same-sex couples in bed together are hardly cutting-edge any more and once again there’s implied nudity scattered around but there’s as much carefully-angled, quick-edit choreography in a ‘sex’ scene as there is in the ‘fight-club’ environment later. The more you forget the Snowpiercer lineage and just watch the series as a slow-moving, high-concept murder story in the age of might-makes-right and stay-at-home quarantine, the better it works. On that level there’s much to recommend in a timely, topical  fashion, though we’ll have to see if it all fits together as a coherent story a few more weeks down the line. 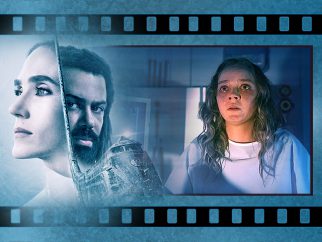