The cult film gets a tv series adaptation - but can the trainbound story create its own momentum?

Seven years ago, with the world killing itself with its wars and its climate, an experiment to save the Earth went horribly wrong, plunging the planet into all-encompassing ice-age. In a last desperate attempt at survival, a 1001-carriage train was created to ferry the world’s richest and most influential people to a kind of salvation…. life aboard an ever-moving transport that would never stop nor reach a final destination… but which would keep them alive and in comfort for the rest of their lives. It would be divided into various sections, according to status and class but all invited would have their place. But in the chaos, the end of the train was breached by those who couldn’t pay such a massive rate for their mere survival among the ‘elite’ but who were still determined not to be left to die in the freezing temperatures.

In the years that followed, the ‘tail-enders’ were allowed to remain, staying in the ramshackle slums of the rear of the train and only if they worked for the smallest rations – they were treated as the lowest part of an essentially-balanced eco-system – to be tolerated but not respected.

But those in the ‘tail’ are tired of waiting for their justice and valued place and a rebellion is growing. Now they feel nothing can stop them from surging up the train and taking back some semblance of pride and basic comforts.

Nothing… except a murder in the higher-class cabins that requires one tail-ender, Layton and his special talents. But what will be his demands for helping?

One of the strengths of Snowpiercer as a film was that it was different than anything else out there: the 2013 South Korean-Czech production directed by Bong Joon-ho (based on the 1982 French graphic novel Le Transperceneige), its claustrophobic setting but ambitious story complemented by an eclectic cast of major names (John Hurt, Chris Evans, Tilda Swinton, Octavia Spencer and Ed Harris) and eastern talent such as Song Kan Ho and Ko Ansung,  was a critical success.  In turns it was quirky, clever, over-the-top, surreal and brutal and was simply a unique experience and hard to ignore.

Snowpiercer the series, which pulled into its TNT platform this weekend has two main obstacles. Firstly, a troubled production has seen that arrival much-delayed and the retooling is sometimes obvious. It’s journey involved three years of back-and-forth production and two directors filming almost entirely different pilots, a change in showrunners and even conflicting decisions on where the show would finally get broadcast. It’s important to get things right and it’s worth taking time to do so, but there were some who despaired the project ever actually making it to the screen. Secondly, this is a show seeking to attract fans with its pedigree – in the sense of those who loved the original film and those who’ve since become enamoured since by Bong Joon-Ho’s continued career, culminating in an impressive win with Parasite at this year’s Oscars.

The trouble is, neither camp will likely see this series as what they might expect or want.

It is both the same animal as the original Snowpiercer film and yet something different – not a damning description in and of itself –  but ultimately  a slightly domesticated version of the same species… it has all the right markings but blatantly bred for a captive audience who want something new and dangerous but certainly not too new or too dangerous. Thus what was a boundary-pushing sf story about class warfare in an enclosed space gets to keep that central remit but manages to feel just a little less edgy, a little more content to hit regular beats, happy that the social-commentary will handle itself but grafting on a detective story to proceedings just in case and given an extended pacing that’s far less urgent.

The film was a straight, if fraught journey from tail-end of the train to the engine at the front and we were never quite sure what that linear movement through the carriages would reveal next. Here there’s far less ambiguity as the show immediately sets out its stall with the disparity between the gleaming, marble-white, antiseptic rooms and hallways near the front and the dirty, litter-spewn bunk-bed slums of the rear – and a glimpse at a couple of the 1000 carriages in-between. Instead of building mysterious momentum, it’s all about quickly establishing a world-view and then populating it with suitable archetypes. There’s some kudos for the design-work, establishing what differences can be made to a series of similarly-sized, narrow sets  though the extremes so far pretty rather than stunning. It’s all accompanied by  earnest monologues from the characters and a seething contempt between them.

Daveed Diggs makes an impression as Layton, essentially a replacement for Chris Evans’ Curtis and the man who is driven by circumstance to assume a key role in the revolution that’s brewing aboard the train. But rather than leading a charge up the train,  Layton is the man plucked form the ‘tail’ to solve a murder and who then tries to negotiates a slower crawl to justice for his fellow workers. At least in the pilot, Diggs appears to be reactive, trying to negotiate a lack of bloodshed rather than acting in a more forceful way that some of his friends want. That potentially makes him an interesting, conflicted character but to remain so, he’ll have to start driving events a little more. After all trade-negotiations can only generate so much tension as Star Wars prequels will testify.

Jennifer Connelly, always a striking and versatile actor, gives us chief hostess and train announcer Melanie Cavill (a character not seen in the film) who is icy and efficient, used to getting what she wants by getting people what they want. In the pilot  it’s hard to get a real reading on her beyond that. She doesn’t appear as full on brutal as some of the soldiers she employs nor as blandly vain as some of the travellers she caters for, but Cavill does seem to be someone you wouldn’t want to fail for reasons of pure self-preservation. Elsewhere Katie McGuinness is Josie, preaching caution as she waits for Layton’s return – trusting in his cause, Steven Ogg (The Walking Dead) essays a more desperate militant tail-ender Pike, Mark Magolis plays the world-weary ‘Old Ivan’ (akin to John Hurt’s role in the film) and Mike O’Malley is Roche, the security commander.

So far there’s some collective potential here from a number of talents and which could develop nicely and into its own niche – but it doesn’t have quite the degree of anarchy and passion that drove the engine of the film. It’s not remotely bad, but neither is it stunning or as radical as it could be. You can see the story it wants to tell, but the trouble is, that has already been told… and there’s not yet enough in this replacement service to make up for what’s been left on the platform… 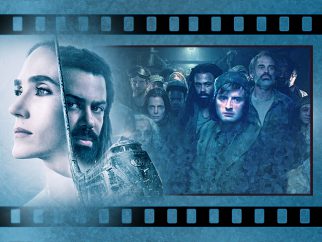