In 'Wicked Old World', 'Penny Dreadful' swings wide and shows that the devil has all the best tunes and dance moves...

Mateo, still bitter at his brother’s ‘betrayal’,  finds himself drawn to the more carefree passions of the club scene with Fly Rico and a fine-suited dance-partner called Rio.  Lewis Michener mourns his colleagues and commits himself to tackling the growing problem of the Nazi powerplay bubbling just under the surface and – as Tiago and Molly escape their duties for an afternoon – forces elsewhere are gathering to thwart their happiness…

The original Penny Dreadful was steeped in unapologetic high-end gothic mythology, but City of Angels is a different beast entirely, more in love with history and people of early Los Angeles than the supernatural per se – the demonic forces that frame the story are largely an excuse for a cultural tour through the passions and prejudices of the area and time. Everything is heightened and ever so slightly askew, but still recognisable.

Through sleight of hand, judicious camerawork and excellent production values, the Santa Monica pier of the 1940s is recreated as a romantic backdrop for Tiago (Daniel Zovatto) and Molly (Kerry Bishé) to enjoy an illicit, if largely ‘innocent’ day away from their responsibilities and though there’s some questions about their future by episode’s end, it’s a sequence worthy of the big-screen. So too is the magnificent dance-number that punctuates proceedings as Tiago’s younger brother Mateo – Johnathan Nieves getting some strong screentime of his own – meets Rio, another of Natalie Dormer/Magda’s personalities. Like a cross between Dirty Dancing and West Side Story, the passionate choreography involved and the commitment from all the actors – main and supporting – is memorable.

Dormer’s various roles are a showcase to her versatility as an actor  and performer – but also a visual ‘tell’ for the audience to be aware of the way Magda is influencing various factions in the tinderbox of 1940s Los Angeles. However good the make-up and wardrobe, it was entirely possible to believe that the other characters might see her slightly differently than we did. But one scene in this episode suggests that there’s a consistency –  the dialogue outside the club where Dormer’s Rio chooses to address the fact that this high-kicking, smooth criminal character is ‘white’ despite being the queen of the swing and the club scene. Dormer has all the right moves – and then some – but despite contact lenses, impressive poise and bespoke clothes, it’s interesting that Magda’s demonic ‘glamour’ doesn’t make her ‘Rio’ appear wholly a minority. That would be arguably better for the story but practically difficult to achieve with Dormer without uneasy shuffling about slight ‘blackfacing’, so there’s an inevitability about Rio’s heritage having to be worked in… but ultimately the episode walks that potentially awkward line pretty well.

Lorenza Izzo’s Santa Muerte is absent this week and one hopes that as Magda’s equal and opposite number, though less ‘showy’ in her agenda, she’ll get a chance to shine as the series continues rather than being relegated to the sides as an observer.

Zovatto and Bishe and their characters’ fledgling romance hold the screen and make us root for them. A veteran of stage and screen Nathan Lane continues to effortlessly steal each and every scene in which he appears, whether flippant and melancholy or sad and outraged he’s the kind of character around whom  you could build a entirely separate spin-off, though also the type of honest mensch that you fear will be written out in an emotive climax (one can but hope he survives the first season). Amy Madigan as Molly’s mother is quietly sinister and her simple, shadow-hued  rendition of Popeye’s theme tune is surprisingly chilling. Equally the likes of Rory Kinnear’s Peter Craft and Michael Gladis as Charlton Townsend give us characters we’d like to see humbled. It’sin  the show’s ability to make us care about all these characters’ fates that it holds another winning hand – rather than just being impressed, we’re becoming invested in justice being done. 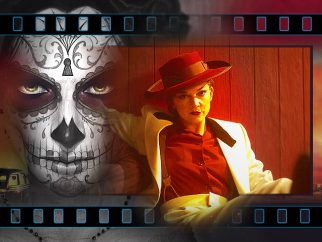