There's a familiar vibe to this Philippines-based action show, but definitely one that should please 'Leverage' fans...

Alex Walker (Christian Kane) is a confident, strutting, but good-natured, guy who’s come out of the DEA service with his world-outlook disillusioned but his morals intact. A man with his particular set of skills could probably make a nice living serving less scrupulous employers but with his dangerously high stress-levels already being monitored by doctors, he’s instead simply opting for the quiet life in a backwater Philippines resort.

If that was all there was too it, his life would make a great travelogue but when you add to the mix that the ‘paradise’ has been redeveloped and that a group of international drug smugglers have decided to base their operations there… well, Walker better watch that blood-pressure.  But there’s little time to do up the derelict gift-shop he purchased, sight unseen. In his first few days on the island he manages to gatecrash a sting-operation, alienate some of the police and become a target for assassins.

Can he win back the locals’ trust and avoid the machinations of a still-serving (but self-serving) DEA agent that would like to see him flounder..?

There are a lot of shows right now that are multi-layered, nuanced, cerebral, glacially-slow, risque and intricate… often quite dark, sometimes a bit depressing and where you have to pay attention to every second less you totally lose track of who’s doing what to whom and why.  So there’s something to be said for a show that harkens back to a less furrowed-brow era and where you can simply sit back and enjoy a good romp!

Almost Paradise, which launched on America’s WGN this week, is one of those potential guilty pleasures: fun, high-concept, fast-paced, fun, action-packed, full of banter and… did we mention, fun? To be fair, there’s nothing ‘new’ here: it’s a remix of tried-and-tested concepts and ideas that audiences will recognise, but they are served up on an attractive, tasty platter and with enough local flavour and confidence to win over viewers pretty quickly. From several of the people who brought you Leverage, with added touches of Murder in Paradise, Magnum PI,  Hawaii-Five-0 and Burn Notice, the unapologetic genre lineage shows…. show-runner Dean Devlin, star Christian Kane and some of the same production crew know what their fans want and serve it up accordingly.

Kane is probably best known for his role as Lindsey McDonald in Angel, as tough-guy Elliot in Leverage and Jake Stone in another Devlin-steered hit The Librarians  and his latest character, Alex certainly feels like he’s cut from similar cloth – just the right amount of charm and cheek needed to create problems and get out of them. Alex/Christian largely carries the weight of the pilot on his shoulders and does so well… and the actor is more than capable of convincingly carrying off the physical demands of the fight choreography.  The pilot episode has some necessary exposition to get out of the way (though the story speeds along – our first glimpse into Alex’s past breezes by in at a ‘matter-of-seconds’ flashback at the very start quickly followed by the briefest medical check up in primetime) and then introductions to be made: Samantha Richelle as local officer Kai Mendoza with whom Walker ignites an immediate love/hate/tolerance dynamic (and who, helpfully has a bikini she can slip into for immediate undercover work), a gruff but pragmatic police chief  Ike Ocampo (played by Nonie Buencamino) who spots the problems and solutions Walker offers them and Arthur Acuña as another officer Ernesto Alamares – stoic and wary of the new interloper –  are a raft of supporting characters that fill recognisable needs and who will hopefully get more detailed and nuanced over time.

There’s set-pieces rather than wholesale logic and unlikely gambits that pay off, but the infectious devil-may-care pace carries enough momentum. What is noteworthy is that rather than fake an island paradise on a Hollywood backdrop, the series is actually shot in the Philippines with a majority of the casting done in Manila. Though Kane is the recognisable face for western audiences, he serves just as much as the narrative gateway to exploring a different culture. The more modern, savvy Philippines isn’t the one for which Alex has developed the nostalgia – the last time he was in the area, it was a few huts and a secluded beach, now a high-class hotel and a hub for all –  so he’s finding his way through a new landscape along with the viewers. And it’s admirable that Devlin and creative partner Gary Rosen has invested the time to getting the tone and look of the piece just right – familiar enough to breed comfort brather than contempt. There’s nods to the problems of the drug-war – and Walker has some controversial views on whether it can ever be won – and the less welcome attention the area can attract, but it never interferes too much with the ‘Mabuhay!‘ vibe and ‘free the spirit’ attitude.

Like a pool-side cocktail with a requisite voluminous umbrella, Almost Paradise isn’t perfect or too demanding… but when enjoyed with the right amount of sunset, fresh-air and ‘happy hour’ attitude, it’s just the stay-at-home travel ticket we all might need right now… 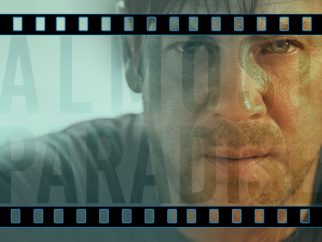