Tessa Thompson's acting credentials are on show with a multi-layered outing for 'Charlotte'...

Charlotte Hale may have died in the massacre at Westworld, but now Delores has ‘resurrected’ one of the Hosts to replace her. But can ‘Charlotte’ keep up the act well enough an long enough to fool those inside Delos (who are already looking for a mole in their ranks after secret transactions puts their whole company in jeopardy)? Even Hale herself is having doubts, juggling incomplete ‘memories’ of the original’s husband and son.

Meanwhile Caleb Nichols calls the police after finding Dolores injured, but en route to the hospital they are pulled over by two men claiming to be cops… and Caleb makes a decision that will change both their lives…

Though certainly more accessible than the last season of Westworld and a delight for the eyes and ears, the show remains one where even the most loyal viewers will have to keep stopping and checking their neural pathways to make sure they remember who did what to when and who we’re watching now. After the focus on Maeve (Thandie Newton) and Bernard (Jeffrey Wright) in last week’s chapter, we’re back to find out what happens immediately after Caleb’s encounter with a wounded Dolores (which, you’ll remember is how we left the premiere episode). But though there’s plenty of scenes with those two characters, The Absence of Field is firmly  Tessa Thompson’s episode and is more about the struggles of her ‘Charlotte Hale’ (or more accurately whichever synth consciousness is now inhabiting the facsimile of her body at the behest of Dolores).

Westworld has always been about more than simply robots versus humans: it’s a study in the human condition from several points of view and here ‘Hale’ is struggling with handling her independently created ‘feelings’ about her actions as well as being off-kilter with what appears to be aspects of the original Hale. ‘Charlotte’ has/had a young son and though she cannot feel the genuine motherly love, it seems to bother her that she can’t replicate that. Equally, the cut-and-thrust of the business world and her semi-control over the Delos corporation means that she has to hide her own involvement with Dolores even as the company searches for a mole in its ranks. Thompson plays Hale with a full gamut of reactions: confused and vulnerable and acting almost like a newborn when she’s with Dolores, cruel and icy in the boardroom, but also predatory in both a corporate and motherly way as needed (when a paedophile seeks to befriend her son, it’s impossible to know which imperative takes hold of her, but either way it leaves the opportunist ‘friend’ dead on a park bench and unable to worry any more families). But there are glimpses of the real Hale’s earnest goodbye to the son she’ll never see again and when we find out that real Hale was  ***extra spoiler space*** the real mole she’s really been looking for, there’s also other beats for the actor to play. It’s the kind of script that Thompson must have cheered for when she first saw it – a huge opportunity and challenge for any performer to showcase their range.

But back to Caleb and Dolores, neither of them letting their side of the story down.  When fake cops pull over the ambulance that’s taking Dolores to the hospital, Caleb’s  military-training makes him instantly aware they aren’t the real thing and there’s a confidence that won’t let him back down from protecting the strange woman he’s just met. Though he escapes the men (and Dolores ends them more permanently), both of them know that the incident will have repercussions and it’s again tribute to the character’s weathered sense of desperation and core being  as well as Aaron Paul’s acting chops that Caleb refuses to bow to the considerable and painful pressure inflicted on him to do so. It’s a quality Dolores recognises and appreciates. But their conversations also do a lot to pinpoint some of the cold nature of the system she wants to bring down. She knows everything she could about him – even his childhood trauma. In this future world, a computer algorithm is making the choices for everyone and we learn that the reason that Caleb can’t get a job is because that algorithm predicts that twelve years from now he’ll take his own life out of dissatisfaction, desperation and regret. Why should anyone invest in a person like that? Dolores notes it’s a self-fulfilling prophecy as Caleb will never get the chance to prove them wrong – unless he throws in with her. It’s a compelling and interesting if equally depressing argument. Again, this is Person of Interest taken to extremes.

Like that first episode of this season, this is another world-building episode but we’re now a bit more invested in the newest versions of the characters. As is always the case, the production design is stunning, creating a future world that has better tech but is still recognisable as our own, with all its sheen and rust if you look hard enough. There’s still the sense that you don’t have all the pieces or know how they fit and the adding of more characters means there’s some mental juggling as to who is doing what to whom, but there’s a decent balance between action and deeper thought. 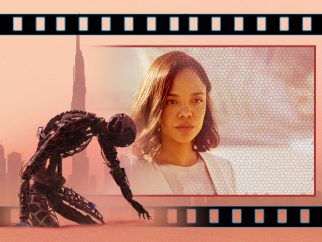