After recent events, many of the survivors face their own personal demons and decide on their next moves...

Negan has killed Alpha and brought her head as proof – and it turns out that its the culmination of a long-lasting plan between himself and Carol. But now that he’s kept his side of the bargain, will she keep hers and lead him back to Hilltop under her protection? It turns out, not so much…

Elsewhere other survivors go in search of possible new allies, but as Beta learns of Alpha’s death, how will he decide to react?

If you look at this week’s episode of The Walking Dead clinically, there’s not a huge amount of forward progression. Essentially, it’s all aftermath – or more accurately the aftermath of the aftermath – a pause for vignettes where various characters assess their recent actions, argue with each other (or themselves) and discuss those actions,  deciding what should be done next. That’s not to say it’s not a good episode, or uneventful, merely that after several intense outings, the show was starting to position some of its characters for the run into the finale. (That, of course, will technically come a week early – with the season’s actual unfinished finale now having to be scheduled for later in the year and next week’s outing rounding things off a little prematurely…)

Look at the Flowers actually starts with a flashback as we see the extent of the secret deal between Carol (Melissa McBride) and Negan (Jeffrey Dean Morgan) which meant he was always biding his time with Alpha, readying his moment to ensure it worked out best for him. carol calls him on his ‘delays’ and he admits that after years of captivity (nearly a decade in-continuity imprisonment) he had relished being outside, ‘free’ and in a psotion of growing power again – but that his priorities had changed and he had no intention of letting Alpha kill more of the Hillsiders. However, with Carol not heading back to Hillside, her deal to help him seek fuller redemption with the community is put on hold – something he’s rightly non too pleased about.

The subsequent Carol/Alpha strand is fine if familiar, using a device that’s been used in the show (and other shows) plenty of times before – a subconscious fear manifesting itself as another character. After her demise two weeks ago, it gives Samantha Morton something other to do than blandly gnash her undead molars together as a disembodied head care of the SFX department, though decapitation hasn’t seemingly affected Alpha’s ability to get under people’s skin. With Carol carelessly trapped under a fallen shed and a walker creeping ever closer in her direction (another familiar tension-baiting set-up), ‘Alpha’ essentially taunts Carol, wanting her to face-up to whether she’s sorry for her actions and even if she wants to live any more. It makes decent television, even if the logic of the ‘encounter’ is a little askew. Pragmatically, it would have been a lousy way for Carol to go – and so soon after Michonne’s exit – so her survival (at least for now) is never really in doubt. But, for reference, the episode’s title does refer to one of Carol’s old, classic and tragic speeches.

When Negan meets up with Daryl (Norman Reedus), the latter is hardly in a forgiving mood and itching for a reason to kill him…. however after much conversation which switches between explanation and banter, it seems Negan will have the chance to escape again when two Whisperers turn up and crown him the new ‘Alpha’. Thankfully for all, Negan only plays along for so long before killing them and winning some temporary trust from Daryl.

After a touching goodbye with Jerry (Cooper Andrews), Eugene (Josh McDermitt), Ezekiel (Khary Peyton) and Yumiko (Eleanor Matsuura) head off in search of ‘Stephanie’, the person Eugene has been secretly talking to over the radio. After encountering some walkers that nearly claim Ezekiel’s life, they enter downtown Atlanta and see what could only be referred to as undead street-performance art, several zombies arranged in eerie yet hilarious tableaus – so much so that it serves as light relief to both the viewer and  ‘ex-King’ Ezekiel (who could do with a good laugh himself as he starts feeling the effects of the growing tumour he’s been secretly hiding -and which might indicate the character isn’t long for the show?). It’s also the cue to finally introduce one of the comic’s more irreverent characters, but for those unfamiliar with the printed-page version, we’ll just say she’s a different kind of ‘royalty’.

In the comic, it was established that under his second-in-command ‘skin-suit’ ‘Beta’ (Ryan Hurst) was actually a famous person that a few people actually recognised when he removed his ‘mask’ – often to their chagrin. Here the same idea has been toyed with, though we find out that he’s actually a country and western singer of some regard named Half Moon – one who finds his way to a deserted bar – that seems to have once been his hideout – that is filled with posters of his performances and albums.  But though he uses his music as a rallying cry for a worrying mega-army of the undead, most of the episode’s scenes involve him talking to Alpha’s head. It’s not a two-way conversation per se (Alpha apparently has more to say to Carol than her deputy) but he uses her head as both a weapon and a sounding-board as he catches his breath and readies for another battle.  It’s effective: a story without much dialogue, but with plenty of surreal atmosphere. 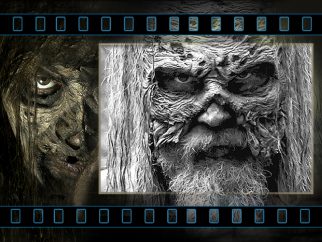