It's not a Wonderful Life as Danai Gurira's samurai finds past and future in the balance...

In letting Virgil (Kevin Carroll) live after his run-in with the Oceanside encampment (in the episode ‘The World Before‘), Michonne (Danai Gurira) is heading back with him to his Bloodsworth Island home after being promised significant arms with which to take on the Whisperers. But on their arrival, Virgil reveals that the family he wanted to’ get back to’ are actually already dead – or more accurately undead and, being no good at killing, he wants Michonne to put them out of their misery before revealing the location of the guns. Despite her fading trust in him, she obliges but after she goes in search of the weapons, she finds herself locked in one of the buildings and seemingly under the effect of some LSD–like hallucinogenic.

But even if she survives the experience, there’s something waiting elsewhere on the island that may make her genuinely question another part of her past – one that might still restore a very specific hope…

Before becoming a ‘What If..?‘ episode, the latest Walking Dead starts with a ‘WTF?‘ as we see Andrea (Laurie Holden) just before her first encounter with Michonne, assailed by a group of walkers and only a few bites away from a very ugly death. And Michonne, seeing the attack… keeps on walking and lets Andrea suffer her fate. Thus what might have initially felt like a potential clip-show using old footage becomes far more interesting as we get context to that apparent rewrite… and before the end of the episode we’ve seen other familiar moments from her story-arc play out in vastly different ways.  Narratively, it’s a drug-fueled, somewhat unlikely ‘It’s a Wonderful Life‘ scenario, something that in inferior hands could feel like a cheap budget-saver.

But here there’s enough going on in the ‘present’  and enough compelling ‘alt-history’ within Michonne’s visions to keep us invested, even knowing ahead of the main examples that it’s her subconscious at work. Really, it’s the editing department that deserves the biggest kudos here… skillfully integrating new footage into existing scenes and sequences that work very effectively in most cases. New footage shows her teaming up with Negan after missing out on meeting Rick’s group first and from that we see her new role in a bad-guy (or less ‘good’) capacity, killing Glenn and exchanging her for Negan’s infamous killing spree with his barbed bat Lucille (with brief glimpses of old favourites Steven Yuen and Michael Cudlitz). It doesn’t end well – alt-Michonne is eventually shot by Daryl and shot by Rick… though it teaches our version something about her own fears and priorities.

And the actual in-story reason that Michonne is leaving? She finds evidence that Rick may be alive and, after seeking Judith’s permission (and being assured the Whisperers have been removed as a threat), Michonne heads off in search of her husband and a resolution we’ll probably have to wait until the proposed TWD Rick Grimes move to see.  Admittedly, finding Rick’s dead smart-phone and boots does the job of placing him alive after the explosion on the bridge, but their mere presence on a boat on  Virgil’s island feels more than a little coincidental, contrived and unlikely. It also seems out of character for Michonne to leave Judith back at the Hilltop (even, perhaps erroneously, believing she’s now safe from the Whisperers) or to even mention Rick’s possible survival to her until she’s far more convinced he’s still alive… but all these elements feel more likely driven more by Danai Gurira’s’s pre-announced departure than connecting the dots too organically in-story.

After two tension-filled episodes with significant deaths, this is all more low-key in scope, largely empowered by those interestingly derived and effective alt-flashbacks and by the exploration of Michonne in a way that normal episodes fail to provide enough time.  Virgil (Kevin Carroll) is a portrait in despair, managing to be sympathetic one minute and duplicitous the next and back again but the supporting cast – fellow prisoners kept by Virgil – really don’t get fleshed out as much as they could be and – by episode’s end – they’ve said their handful of lines and all parted company.

What We Become is a  decent and interesting episode which earns collective marks mostly because of the mythology-heavy aspects and the sheer implications going forward rather than from its somewhat slight and familiar extended story… one that don’t make a whole deal of sense in and of themself. While essential viewing in its own ‘arc’ way,  it’s not quite the assured pulse-pounder we’ve had over recent weeks and more of a de rigeur salute to a valued regular. 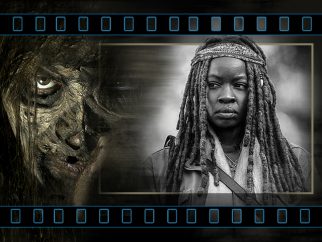