As the 'La Sirena' reaches its destination, its crew meet some new people with old faces...

By way of sub-space speeding, the La Sirena arrives at Soji’s home-planet, one that she now recalls is called ‘Coppelius’ . Unfortunately… they’ve been followed by Narek. Fortunately… they’ve also been followed by Seven of Nine and Elnor aboard the restored Borg cube and so a fire-fight begins above the planet’s surface. However Coppelius has some organic defences of its own and soon all the craft are crashing through its atmosphere, their descent only slowed a little by strange orchids that surround them.

Having made it through intact, Picard and the crew first check the Cube and welcome those who survived, before departing to reunite Soji with her people.  They find an android enclave under the guidance of Sutra (who looks remarkably like Soji) and Dr. Altan Inigo Soong (who looks remarkably like his father Dr. Noonien Soong and Data) both of whom are glad to see Soji again and wish to hear about what she has learned. Through Sutra’s ability to mimic a Vulcan mind-meld they learn the details of the ‘Admonition’ that so terrified the Romulans.

But Sutra sees it not as a warning but as a promise of synthetic survival. With the Romulans on their way and refusing Picard’s promise to stand by them if they choose peace, Sutra decides to summon those synth-benefactors, even if means the end to all organic life in the galaxy…

It seems that Artificial Intelligence is the go-to for modern drama. Battlestar Galactica won all the cosmic credits for its reboot, Blade Runner is the cultural pivot that will never die and this week saw the return of Westworld for a third season. But though Picard‘s first season has discussed the rights of synthetic life-forms, the first part of its finale comes across as something of a dated, retro-looking addition to the debate, paying slight lip-service to the concepts and morality that’s on show far better elsewhere. Indeed, for better or worse, the penultimate episode of Picard feels like an episode of The Original Series with a far higher budget for its FX-house if not one equally distributed to the script department. There’s more philosophy on show than in the Kirk and Spock era and some nice inter-character moments but visual aspects such as the faux-fauna and the Woodstock-dressed aliens of the moment are deliberate, none-too-subtle throwbacks to the 1960s that unfortunately come across as cliché and cheap rather than sly and reverential. The bigger problem is that the story is a creaky trope in itself, with our heroes trying to persuade the locals of their honourable intent and failing to do so due to the machinations of those with power there.

And what’s more, the pieces required don’t really fit. The synthetic beings essentially dressing like flower-children is an affectation that makes little sense, the capturing of Narek (Harry Treadaway) is convenient but requires ignoring of an even-bigger, whopping great crashed Borg Cube in their backyard (though it usefully but artificially removes Seven of Nine and Elnor from much of the episode’s narrative – giving them little more than a brief ‘ Hugh’s dead? You’re alive? Cool! See ya!’ scene to work with). The news that the Romulans are on the way with over two hundred armoured warships makes the idea of their Zhat Vash being some sort of secret cabal somewhat redundant and Sutra’s actions arguably make the Romulans somewhat prescient and correct in their threat-assessment, if still thuggish bullies. (Star Trek: Discovery fought a whole righteous season against a similar AI threat, so there’s some hypocrisy in there too). And, forgive me, but wasn’t there a big deal about Soji seeing a world with two red moons and constant electrical storms – distinct, specific and rare attributes that led to finally identifying its location – yet when we arrive the whole of Coppelius looks like a beautiful, calm bespoke Californian valley? Perhaps they’ve just arrived off-season, n’est pas?

Isla Briones does, as predicted, add a third character to her resume, this time painted in gold and far more sinister… and it’s a tribute to her physical ability that she makes Sutra so different in poise and action, though the script doesn’t always help her. Alison Pill as Agnes Jurati spends most of the episode mastering the lost art of moist-eyed lip-quivering to the point where you wonder if Jennifer Love Hewitt was a first choice. One suspects that her later decision to go against Picard is fake and that, one way or another, she’ll redeem herself next week – though at this rate she has a fair amount of redemption to work off. Elsewhere Michelle Hurd and Santiago Cabrera have their moments, the former’s Raffi expressing her love for Picard and the latter’s Rios demonstrating his love for cigars.  Brent Spiner revels in playing a human character again, but it feels more like a reprise/homage than a new (if related) character.

The first part of Et in Arcadia Ego (the title relating to the painting by Nicolas Poussin of the same name that expresses idea of there being death, even Paradise… see what they did there?) feels like it would work much better as a tie-in novel penned by the likes of respected author Peter David and who could have breathed more life into the interconnected moments and broader themes on the page than we ultimately see on screen. He knows how to subvert a cliché, where the tv version this week just embraces it.

It is, of course, all set-up and build-up for the final episode, but despite the considerable talent involved, it still feels uneven from week to week… 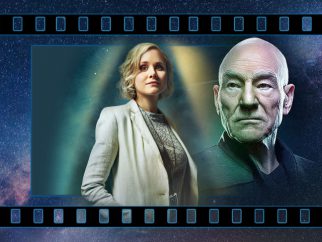