In a nostalgic interlude, Jean-Luc Picard needs the counsel of older crew-mates to get him back on the right track...

Picard (Sir Patrick Stewart) and Soji (Isa Briones) travel through the emergency portal and arrive on the planet of Nepenthe where they are greeted by a figure who appears to be a young girl in furs, out hunting in the woods. However appearances can be deceiving and soon the stranger, called Kestra (Lulu Wilson), is taking the new arrivals to her home and some very familiar faces.  Kestra’s mother and father are Deanna Troi (Marina Sirtis) and Will Riker (Jonathan Frakes) and they greet Picard with the love and friendship created from years on the Enterprise.

For now they are safe. However an ill-thought comment by Picard alerts Soji to her true lineage and the very real fact she’s not ‘real’. Can Picard, Troi and Riker… and perhaps most importantly Kestra… find a way to help her link herself to real humanity and also help point her onwards? And might there be time for some home-truths for Picard himself?

Meanwhile on the Borg Cube things are going far from well and onboard the La Sirena, there’s a crisis of conscience…

Usually describing  a show’s weekly outing as a ‘filler’ episode would be seen as something critical of what’s on offer. But while it’s true that there’s very little true advancement of the main plot in Nepenthe, the latest hour of Picard, its dual purpose is to a) pluck at the heartstrings of pure Trek nostalgia and b) to ground our titular character in a way that might have been missing as he stumbled through events with typical stoicism but atypical regard for strategy.

Director Doug Aarniokoski  – rapidly becoming a mainstay of Trek‘s current upturn – manages to successfully do both, with the main plot giving us scenes between Jean-Luc Picard, Will Riker (Jonathan Frakes) and Deanna Troi (Marina Sirtis) that will have pleased almost all long-time Next Generation fans. They provide a touchstone to what has gone before while acknowledging time has continued to flow along. In other shows, returning faces would have plastic-surgery fingerprints all over them and their bodies squeezed into age-inappropriate clothing in a vain effort to pretend time hadn’t touched them. Instead, both Frakes and Sirtis embrace a certain ‘reculer pour mieux sauter’, their characters looking legitimately older and buoyed by life’s triumphs and tragedies, but with that real sense of finding a true ‘home’.   They – and the interlude – make us feel for a son they’ve lost even though we’ve never met him and yet proud and protective of what they have left, including a daughter, Kestra.  Kestra is played by Lulu Wilson (The Haunting of Hill House, Sharp Objects) who continues her list of impressive supporting turns, giving the girl an ingenue persona that’s also tomboyish and tough. The visit to their homestead (actually an incredibly stylish log-building on the Universal backlot) is poignant without being preachy. Isa Briones works well with her co-star, her character Soji finally learning the reality of her situation, or at least some of the implications (and not knowing who to trust or believe because of recent traumas and betrayals) and finding another ‘young’ soul to guide her through.

For most of this series so far, the values of the Federation and Star Fleet have been, at best, questionable and the characters far more cynical – even nihilistic – than at any time in the Next Generation run. Picard’s arrogance and regret have often clouded his judgement  – which provides opportunities for both great drama and yet unyielding melancholy – so it seems entirely right that he visits two of his oldest friends and receives – whether he knowingly seeks it or not –  both a firm embrace and a kick up the backside about his current status. Picard once against stumbles with an ill-timed comment in front of Soji, but Riker and Troi are the kind of friends one truly needs:  willing to anything for you and support you fearlessly, but who equally aren’t afraid to call you out on bullshit or destructive decisions… and both have moments where that important connection is shown. By the end of the episode, we might have not advanced the plot in any real way, but we have seen it given a personal, renewed purpose, which is just as important.

The action ‘off-world’ is a little less satisfying. In sequences that are well-shot  but narratively feel like they could have taken place in brief cut-scenes from the previous week – Evan Evagora’s Elnor slices and dices with his blade through the claustrophobic corridors of the Borg Cube, deftly avoiding Romulan fire but Jonathan Del Arco’s Hugh is less fortunate: the character seeing some of his triumphant Borg-patients slaughtered and then being quickly killed off with a small dagger-dart to the neck – an ignoble end for one who survived so much. On the La Sirena, we see Agnes Jurati apparently overcome with grief and guilt and possibly taking her on life to avoid the ship being tracked by the pursuing Narek. The explanatory flashback to why she’s acted in her duplicitous way (if you freeze-frame the vision she gets, it’s pretty horrific) somewhat excuses her actions, but not completely and the episode largely portrays Narek with non of the conflicting feelings from last week.

All in all, this is a well-paced, thoughtful (and easter-egg-laden) entry into an uneven season, one that’s so far been entertaining and fun but struggling slightly to find its own unique direction from it’s self-rendered darkness.  Nepenthe is a welcome point of light, a quiet beacon of hope and nostalgia, a short but meaningful break before the main run to series end. In that sense, it’s one of the quietest, butbest entries of the run, especially for older fans. 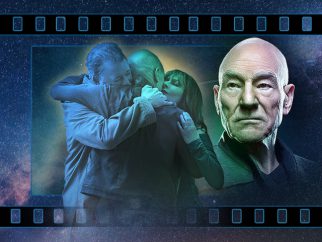 ‘Chernobyl’ creator to bring ‘The Last of Us’ adaptation to HBO…