It's an all-star, eclectic cast in a 'whodunnit like no-one has dunnit before' or so the trailer proclaimed...

When renowned crime novelist Harlan Thrombey (Christopher Plummer) is found dead at his estate just after his 85th birthday, the inquisitive and debonair Detective Benoit Blanc (Daniel Craig, taking a break from 007 duties) is mysteriously enlisted to investigate. From Harlan’s dysfunctional family to his devoted staff, Blanc sifts through a web of red herrings and self-serving lies to uncover the truth behind Harlan’s untimely death. It appears that everyone has something to hide but who is the real guilty party?

It takes a certain kind of film to have James Bond take on the combined forces of Captain America and General Zod… but this probably isn’t what you’d expect from such an encounter.

The theatrical release of Knives Out! was met with conflicting reactions and there’s a certain element of truth to both camps’ views.  Is it a stylish pastiche of the typical Agatha Christie whodunnits? Yes, there’s some clever sideswipes and affectionate subversion of the genre. Is it also a messy mixture of content boasting style over content? Well, yes… there’s plenty of examples where the story is being supported by scattershot set-pieces and eclectic performances alone. It’s the kind of movie where you have to note its intent and style and then go with it or not.

It’s a mystery in name, fun and full of twists and turns that are fine and fun in the moment… but ‘smart’? Again… yes, but very inconsistently. Certain parts are well-constructed and there’s a feel for the first half of the film that this could be a savvy time-piece that clocks in with Swiss precision and fits together like a masterclass jigsaw. Instead, the latter half largely ticks over on sheer quirkiness alone – banter and bravado – and the truth is that far from being a magnificently blueprinted caper, it’s unlikely you’ll be able to work out the guilty party ahead of the climax – there’s simply an aquarium full of red herrings and it becomes clear that the resolution will be just a matter of which one the film will settle on… rather than any real deductive reasoning to get there. There’s an undeniable certain fun in that if you approach it that way, but it also allows some of the bigger-picture experience to simply coast. The title and knives themselves are curiously irrelevant to proceedings, especially as they are such an iconic part of the marketing and with a display on screen that could put Game of Thrones throne to shame.

That all-star ensemble cast –  including Chris Evans, Ana De Armas, Jamie Lee Curtis, Don Johnson, Michael Shannon, Toni Collette, LaKeith Stanfield, Katherine Langford and Jaeden Martell – are clearly having a great time, simultaneously snarking, chewing the scenery and often playing against type. (Though both Riki Lindhome and K Callan feel largely underused with a handful of lines between them throughout and you wonder if there’s more of them on the cutting-room floor). It feels, for better or worse like an am-dram production writ large. In an obvious attempt to put some distance between himself and 007, Daniel Craig himself feels  miscast and probably knows it – deciding to see just how far he can take it, but the result is no better than a guest-host throwing himself into an SNL sketch: okay in the short-term for a laugh but never in danger of being taken as straight as it needs to be as the lynchpin of events.

Rian Johnson’s efforts are not nearly as bad as some have claimed but not quite good enough for a cast of this talent that it might otherwise suggest: it’s a passable romp that you’ll likely enjoy while watching and then pick to death thereafter…

Knives Out is released on DVD in the US now and in the UK on 30th March. 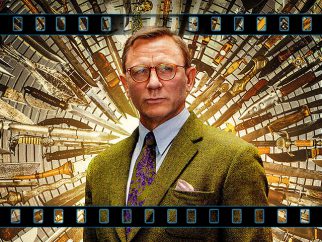