It's the beginning. But has the moment been prepared for?

In the far future, the Cyber-War has left humanity on the brink of extinction and even the Cybermen reduced in number. But as a new battalion are reactivated and their leader swears vengeance, the Master has appeared through a gateway that leads from a legendary outpost to a devastated Gallifrey. Challenged to find a way not just to defeat her reconstructed enemy but a deconstructed history, the Doctor must learn some of the secrets of her home planet’s earliest days and its most closely guarded secret. Can the Doctor trust the Master, her memories or even her own entire race?

And when the answers finally come, what will be the cost to both Doctor and the people she holds dear?

Every so often, Doctor Who goes through a major overhaul – not just in the obvious moments during the change of the actor playing the role or even the show-runner (which always bring excitement and nay-sayers in huge waves)… but in some fundamental shift and direction. For instance when William Hartnell essayed the First Doctor back in 1963, it would be a long time before the idea of regeneration was even mentioned and Gallifrey was merely an Irish-sounding name that had not become the Time Lord homeworld. During the 1970s and 1980s Doctor Who went through a lot of behind-the-scenes drama with lofty ambitions and a challenging budget. Some of the ideas discussed made it to the screen, others didn’t – and the combination of both outcomes shaped not just that era but everything that came thereafter, whether used or not. The relationship between the Doctor and the Master remained enigmatic rather than go through with defining it more exactly and ideas about the Doctor’s role in the earliest days of Gallifrey were ultimately left to non-canon tie-in novels and the like. The casting of a woman in the role is arguably nothing more than a slight ripple compared to some of the ideas floated before.

The Timeless Children, the final episode in Doctor Who‘s twelfth/thirty-eighth season, is genuinely one of the pivotal recent moments that has made it through the vortex and for better or worse, it’s now canon (or is unless anyone involved in the production down the timeline decides its not). In an era of already considerable controversy, Chris Chibnall has essentially looked at the fall-out from his recent choices and doubled down in a way guaranteed to echo through fandom for some time to come. It’s the bravado or hubris (take your pick) usually reserved for the end of an era, a signature flourish… but this time there will be – has to be – follow-through from the current team. There’s still the question of the impact. Some of the new elements simply overwrite old ones without changing anything other than specifics of who did something. There’s a mention of The Division (which seems a variant of the previously mentioned Celestial Intervention Agency) and instead of an AWOL Rassilon we have a founder named Tecteun.  Yes, now we know that the Time Lords stole their regenerative powers from a small child from another universe… that the child was a previous version of the being who would be called The Doctor and that there’s a whole section of the character’s past (and previous incarnations) that have been ‘redacted’.  That’s BIG stuff. One can argue it broadens the canvas, but the show already had the whole of time and space to work with and one wonders what this narrative extension actually brings to the table. Do we really need umpteen Doctors to go with the thirteen or more we know of – if so, why?

Putting that story-choice aside, the delivery was good, with a series-best performance from Whittaker balancing anger, shock, grief and still retaining some quirks and Dhawan’s Master walks the line between madness and cunning (though I think there’s an argument to be made that, his latest ‘fate’ notwithstanding, this could logically be an incarnation before Missy). There are nice touches and call-backs. The Cyber-Lords are a great design. After looking like an old Luke Skywalker last week, Ko Sharmus wandering around the Cyber-ship narrowly avoiding Cybermen seems to pay direct homage to Obi-Wan Kenobi doing the same thing on the Death Star; The Master being annoyed he didn’t come up with a witty retort before blasting Ashad is quite fun and the quick flick through the Doctor’s myriad memories not only provides glimpses through the show’s history but also  seems to solidify the long-debated sequences in The Brain or Morbius that hinted at previous incarnations. Graham having problems extracting himself from the cyber-armour and his chat with Yaz work well and even Tosin Cole as Ryan gets a worthwhile scene or two. FX-wise a majority of the shots work and the Cyber-ship landing (and crushing) the Citadel is impressive.

The finale still highlights a major format problem that has yet to be resolved. Each week the plot has to find some reason to separate the Doctor from her ‘fam’ or give them nothing of import to do. Clinically speaking, the finale plucks the Doctor from the action and treats her history-lesson as punctuation before she reasserts control for the last act… with her ‘fam’ doing the physical resistance and heavy -lifting in the meantime. It’s easier to pace stories when there’s one companion, possible when there’s two, but when there’s three or more it often becomes a case of artificial obstacles. Add to that a range of weekly supporting players (ones more than ever treated as collateral damage – this week, Bescot lasted all of thirty seconds before a pointless death with Yedlarmi and Ethan surviving but only having a handful of lines) – and there’s too little going on for too many people. The show really needs down-sizing in that department.  Speaking of reductions in size, Ashad, the Lone Cyberman is effectively dealt a sucker-punch and after being built-up as the Cybermen’s answer to Davros he’s miniaturised into a career as an Eaglemoss action figure – something of a twisted yet disappointing end.  Equally we now have at least two other Gallifreyan Tardis craft out in the wild – one in 20th Century Sheffield disguised as a house and another in the far future described as a tree. Given the amount of Doctors, Clara’s Tardis and others, it’s amazing we don’t trip across them more often.

A lot of people were worried about the rumoured revisions (a lot of which turned out to be at least partially-correct) and it’s likely that a fair number of older fans will be left perturbed. Once again, there’s a sleight-of-hand with the Doctor avoiding doing the genocidal deed but still turning her companions into soldiers to fight for her… but this was far from the car-crash some were predicting and is hardly the first time a show-runner decided to press on a reset button with gravitational force. One may be wary of the deconstruction that happened – for anyone other than the most recent fans, there’s serious questions about even modern Doctor Who (River Song’s origins now make no sense and contradict the current set-up and all the hoo-hah about Matt Smith’s regeneration looks bizarrely irrelevant as do far earlier interventions) but the new construction at least looks shiny and the same in spirit. But, the argument remains, for all the swooping, soaring and intensity…was this less a case of shock and awe and more of a mere change in venue done on a whim that really didn’t care too much about even the pillars of continuity?

So what of the future?  On-screen, the Doctor is imprisoned and seemingly heading for a seasonal encounter at the end of the year with the Daleks (and maybe even Doctor Ruth). In reality? Piers Wenger, current head of BBC Drama has strongly refuted rumours that the BBC is considering ‘resting’ the show amid declining ratings. Though there are lots of reasonable caveats and context to be considered apart from the creative direction: such as time of year and viewing habits admittedly changing across the board… there’s no real way to spin the likes of 3.7 million ratings for the ‘flagship’ show as anything other than disappointing… yet equally ridiculous to pronounce it as a death-knell. But at an event in London last week, he spoke out in favour of the show.

“I worked on Doctor Who myself and produced it for many years and I can honestly say I don’t think it’s been in better health editorially,” he claimed. “The production values have never been better. It’s also not just funded by the BBC, it’s funded by lots of international partners. It’s an incredibly important show for young audiences, it’s still watched by families in a world where there are fewer shows that have the power to do that. It will always be an important show for us and we’re a very long way from wanting to rest it.”

Summary: Essentially a well-presented, glossy and entertaining season finale that makes no sense the more you think about it and largely ignores or replaces key elements of the 50 year+ run, under the mythos of ‘adding’ to it. Your enjoyment and mileage  depends on how important that is to you.It’s something of a moot point with it likely being eighteen months until a full series is back on the air again, anyway. Doctor Who endures and time – as always – will tell. 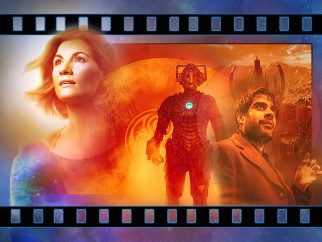