Thunderbolts and lightning... but is 'Diodati' very very frightening?

The Villa Diodati, near Lake Geneva in Switzerland, 1816:  A group of people who will have a huge effect on centuries of literature to come gather for their own decadent weekend.  But though Lord Byron, Mary Shelley, Dr Polidori and Clair Claremont are there… where is Percy Shelley? That’s a question that faces the Doctor and her companions when they gatecrash the festivities with clear instruction not to interfere with the specifics of the timeline. At first everything seems otherwise normal, even if the Doctor isn’t sure events are happening the way they should… but when the rooms of the house start to rearrange themselves and skeletal remains take random walks around the corridors, it is clear that something else is amiss.

Something outside the villa desperately wants in and when the Doctor discovers who and what it is, the group’s troubles are only just beginning. Because to save everyone, the Doctor may have to make a sacrifice… is the life of one man worth the costs of millions… and what of time itself?

Not only has Mary Shelley’s Frankenstein stood the test of time and provided the template for many variations on its theme, but the story of how the author came to write the novel has also consistently remained of interest and conjecture. The events at Switzerland’s secluded Villa Diodati  – and 1816’s ‘Year without a Summer’ – became notorious when the young Mary Godwin, her lover (and later husband) Percy Shelley, Clair Claremont,  Lord Byron and his physician Dr. Polidori holidayed at the estate and, frustrated by the bad weather, decided to conjure up horror stories. The conversations led to the groundwork of Mary’s Frankenstein and Byron and Polidari’s idea for Vampyre (which would influence Bram Stoker’s Dracula).  The events would also be referenced in popular fiction: 1935’s Bride of Frankenstein includes an introduction involving the group prior to the fictious sequel unfolding, there was the 1986 film Gothic, the 1988 outing Haunted Summer and 2017’s Mary Shelley. In the Highlander episode The Modern Prometheus, it’s a Quickening that influences Mary Shelley’s perception of events involving lightning, death and rebirth (and Peter Wingfield’s Methos under the Polidori pseudonym that is involved in the weekend’s deadly decadence).

So perhaps it’s no surprise that Doctor Who now has its turn – the question is rather, why it has taken so long? (In fact, it didn’t:  Mary Shelley was a companion of the Eighth Doctor in a series of acclaimed audio adventures from Big Finish). Bearing that in mind, one suspects that each of the showrunners who have helmed Who through the ages- and the actors in the title role(s) – would have tackled the premise and the events in very different ways from each other and there’s potential in all of them. So how does the latest compare?

It’s another mixed bag… far better than some other recent episodes but with a sense of lots of different ideas thrown together (again with the Frankenstein analogies?).  The idea of a maze-like house that keeps restructuring its layout is always a strong one on a visual and thematic level and well-shot, but the idea of Percy’s Shelley’s mind altering perceptions being the cause doesn’t really explain creeping skeletal hands (however nice the imagery may be or how silly the mock-strangulation looks). Lilli Miller is fine as Mary, a formidable woman who is as brave as she is creative without being a post-modern heroine for our era rather then the 1800s in which it is set. Byron comes across as a distant relation of Captain Jack Harkness, using every opportunity to flirt which the Doctor quickly refuses, giving some light relief.

Whittaker herself is given a good speech reminding her ‘fam’ that their travels are not wholly democratic and scolds them when they even entertain the idea of letting one person die to save humanity. One can imagine Tennant or Capaldi knocking such a speech out of the park, but here Jodie gives it a decent lob instead, somewhat hindered by the daffy, quirky persona the character usually demonstrates and which is less easy to shake-off when higher drama is needed. Still, Whittaker at least is finally getting some much-needed gravitas. (However, the stern, solemn, indignant lecture on the dangerous  pliability of time and its consequences seems highly hypocritical  given that the Doctor and her team are already willingly invading and stumbling through a pivotal moment in literature with the carefree nature of day-trip groupies and clearly causing their own problems). Writer Maxine Alderton and showrunner Chris Chibnall also produce another never-previously-known super-power to the Time Lord bag-of-tricks – on top of regular ‘mind-melds’ we now have the sudden ability to show someone their death…  Your mileage on whether that’s a clever idea of merely a highly-convenient narrative ‘Hail Mary’ (Shelley) band-aid will likely vary depending on how forgiving you are.

The link to the cybermen, who we now know will play a pivotal role in the series two-part finale – even before the blink-and-you’ll-miss-it Next Time trailer – was probably a given, despite the fact that none of the promotions for this episode revealed such a presence… the idea of artificially reviving humans, using body parts etc was an obvious piece of connective tissue – perhaps, literally. The actual design of this ‘Lone’ Cyberman is interesting and visually effective –  over the years the basics have been tweaked  but this is one of the first to ever simultaneously shown parts of the human beneath. It should be horrifying and emotional, but it might prove more dramatic (and inspirational to Mary’s literature)  if viewers hadn’t experienced Star Trek‘s Borg in the meantime – and which is a current powerful factor in Picard. The SFX themselves vary in quality throughout, some more convincing than others, but this is an episode where the lighting rather than CGI holds sway.

Ultimately this is a decent episode of Doctor Who, still a bit messy in the narrative department but nice to look at and delivered with earnest… harking back to the Russell T. Davies era in style and with more than a few story-elements of Moffat’s 2015 episode Hide. There are now only two episodes to go and darker tones are seeping through… but one wonders if these will be enough to redeem a season that, unlike Frankenstein, has not really been the sum of its many disparate parts? 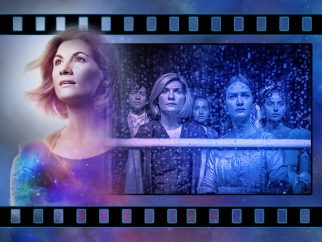