Fourteen years ago, Picard oversaw the handling of refugees from the doomed world of Romulus and his visit to one such planetary safehold at the time, Vashti, was met with support and gratitude. But it was during his visit that he learned of the Synth attack on Mars… an event that would derail his initiatives. Now, over a decade later he returns to Vashti to see if the Sisters of the Qowat Milat, a cabal of warrior nuns he had befriended, might assign one of their own to help him in his quest. However times have changed and  the Qowat Milat, famous for speaking with absolute candor and honesty note that Star Fleet’s abandoning of the enclave has meant growing resentment and suspicion.  Elnor (Evan Evagora), the young boy Picard met during his first visit, took that abandonment harder than many and initially refuses Picard’s request for aid.

Meanwhile on the Borg Cube, Romulan agent Narak (Harry Treadaway) tries to worm his way further in Soji’s (Isa Briones) affections, but though unaware of her own nature, she seem wisely aware his presence is anything but uncalculated.

As things quickly go south on Vashti, help may be coming from an unexpected source – but one with a very familiar name and designation…

It’s interesting to note that a criticism of The Mandalorian – that it simply homaged different classic genres in quick succession – works somewhat more satisfyingly here.  This week’s episode tilts fairly evenly between a ronin/samurai vibe full of honour and questions of worthiness to the more ragtag formation of a Magnificent Seven set of disparate warriors thrown together for a common cause.

Though Absolute Candor could be considered a pit-stop  and a momentary diversion after three-episodes of elongated set-up – a fuller-narrative delaying-tactic with more recruiting efforts and before those various threads of the yarn start to pull together –  it works well in itself: there’s a good balance of walkie-and-talkie discussions about regret and then action-filled retribution scenes involving a brief but blazing space-battle. It’s not big-screen scale CGI, but it’s just as good as anything else of its television ilk.

Sir Patrick’s love of Shakespeare might not be reflected in the language per se, but Absolute Candor does give several chances to quote Alexandre Dumas and to see decent swordplay, mixing both fencing and katana-decapitation sequences with graceful ease. It’s also interesting to see Picard in flashback, arriving with good intentions at the Vashti colony just before the Mars attack, but dressed all in white and, rather symbolically, acting like the great white ‘saviour’ stepping out among the colonials in days of old (with one of the townsfolk looking suspiciously like John Malkovich, but probably isn’t). His return years later in the ‘present’ shows him how far he fell short in his promises to the collective refugees and the individuals he encountered. If anything, this series hasn’t been afraid to show us Picard’s considerable failings rather than his obvious triumphs and the flashbacks have been illuminating – at least thus far in showing how much his pulling back from the world let down so many of his friends. (“Man, he can’t even take a guilt trip without using a starship…” Raffi notes of him). Of course, it also doesn’t hurt to be politically topical either.

Jonathan Frakes has yet to reprise his role as Riker/Number One but here steps behind the camera as director – a role for which he’s already proven himself many times, including Trek features. He handles it all with the expected aplomb.  Amid the drama, there’s well-pitched humour with Alison Pill becoming the requisite ‘I‘m talking too much, aren’t I?‘ character and despite her engaging nature and her Aaron-Sorkin levels of chatterboxiness (she did appear in The Newsroom, after all), she just manages to steer the performance away form the ‘annoying’ degree into which it nearly falls… and I’m personally still inclined to wonder just how trustworthy she might be in the longer-run. Equally Santiago Cabrera is engaging as Cristobal Rios (but proving his comedy chops in a series of ‘Emergency Holgram’ variations that each have their own personality and attitude… contrived affectations maybe, but fun nonetheless).

Quibbles of the week? Just a few.  The sock-sliding scene aboard the Borg Cube was just… bizarre and slightly the wrong side of quirky. The series continues to throw an ever-increasing number of Scrabble-named secret organisations into the mix. After the Tal Shiah and the Al Zhat Vash we now have the Qowat Milat, essentially a collective of Romulan Warrior Nuns – which as far as things go at least gets immediate attention from that description alone. Unfortunately we don’t get to see any wimple-clad warrioring, rather the fight choreography falls to the only man in the cabal: their adoptive son Elnor (Evan Evagora). You could argue he’s a walking cliché, simply a Legolas from Romulus  but as Taoist tropes go, Evagora acquits himself well enough. Picard’s obvious affection for the younger Elnor is a little shoe-horned in as the character never felt comfortable around children, but that is at least referenced in context.  One also wonders if Picard tearing down a ‘Romulans Only‘ sign and causing something of a disturbance in the Vashti bar is just incredibly naïve and impulsive or if he’s gambling on the reaction changing various decisions – if it’s the former or the latter, both reasons seem unusually reckless.

The last few seconds give us a new recruit to the mix and a familiar face and though they recognise each other, is this the franchise’s first on-screen meeting of two Trek icons? At least we seem to be running on more than impulse power and next week’s outing looks like fun… 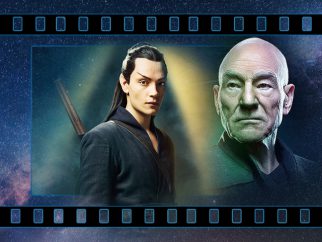