Fans will have to get used to the strong, but slower pace of Trek's latest chapter...

As Picard (Sir Patrick Stewart) tries to piece together the events that brought Dahj (Isa Briones) to his door, the mystery deepens: An apartment that has been scrubbed of all evidence on a molecular level leads to tales of an almost mythical Romulan cabal of operatives who work in the shadows throughout the galaxy. But even if that’s true… can Picard expect any help from Star Fleet in pursuit of answers after his controversial on-screen interview? And how much time does he have to find out?

Far away on the remnants of an abandoned Borg Cube (floating in what was Romulan space) are being explored and excavated under close supervision: One of that team, Dahj’s twin Soji (also Briones), is unaware of the lengths that some people will go to in efforts to exploit her and her own potential role in a conspiracy that could affect the fate of the quadrant….

The opening salvo in CBS All Access‘ Picard series united many fans and critics, happy to be back watching a character-driven Trek project and for the sheer presence of the always welcome Sir Patrick Stewart making it so. There was some necessary exposition and scene-setting, but for most it wasn’t so much a point-of-entry as an overdue welcome reunion. But with the arrival of the second weekly installment it’s possible to scrutinise not just the content but the momentum. And while it continues to be stylishly shot, acted and intriguing,  accolades that are rarer than they should be, there’s a decent argument that you could probably have told a fair amount of the first two episodes in a slightly extended single entry (overseer Akiva Goldsman has said that the first three episodes act as the pilot in some ways) . There’s more backstory and Sorkin-levels of walking and talking: a lot of discussion about secret-ops which provides some welcome context that is wonderfully delivered… but with the exception of a flashback to the day that ‘Synths’ appeared to go ‘rogue’ and devastated the Mars ship-yards (chillingly done to excellent effect), there’s very little thereafter to genuinely quicken the heartbeat.  Picard’s house-keeper Laris (Orla Brady) suddenly becomes a graduate of CSI: Romulus and we hear of yet another nefarious counter-insurgence agency made of up of spare Scrabble-tiles. Notably, Picard is still on Earth (and the series-preview of his talk with Jonathan Frakes’ Riker would suggest that despite glimpses of Jean-Luc on a spacecraft, he’ll be grounded for a while yet) and that’s somewhat disappointing. However beautiful the vines, villas and countryside are – and they are –  this is Picard: Twenty Years later not A Year in Provence. That said the cinematography is strong, the colours are crisp and a large proportion of the visual effects prove convincing in both technological and organic detail, though the Abrams light-flares sometimes intrude.

Despite those quibbles there’s more than enough counter-balance of welcome connective tissue. The degenerative disease referenced at the end of TNG’s run tentatively makes itself known again, hurrying Picard’s sense of urgency.  There are sly jokes in the mix  – a sign in the repurposed Borg Cube states  ‘This facility has gone 5843 days without an assimilation…‘ and a desert home has a resonant location. The elements that are off-world – essentially within a partially-abandoned Borg Cube – remain intriguing with a group of historians searching through the ‘artifact’  in a project that looks like a cross between archaeology, reclamation and a fishing expedition for trouble. Though it seems to have a Romulan imperative, it’s not precisely clear how official the operation might be… after all Romulus itself is gone and Star Fleet’s position on dice-shaped spacecraft remains cautious at best.

Stewart’s Picard continues to show a balance of  age and passion: his doctor has warnings for his health and his friends are worried for his safety. When he’s challenged by those in Star Fleet and accused of gross hubris, there’s a certain element of truth in the observation. He’s just trashed his previous employers on intergalactic television and then strides into their offices dictating the terms of what he needs… that was never going to go well and however much we know he’s speaking the truth about the possibility of subversive activities, it would be easy to take such as inconvenient and incoherent in the same breath. Isa Briones as Soji is less physically active than her previously-seen twin, at least in the fighting department though she seems to make up for that by quickly getting together with the enigmatic Romulan Narek (Harry Treadaway) but there remains a certain Battle Angel Alita undercurrent. Alison Pill as Dr. Jurati feels like she’ll have more to do later and it may just be me but I’m not sure I completely trust that character not to turn out to be something sinister!

This feels like older, wiser, melancholy Star Trek, no longer eager to set its phasers on stun to pull in easy ratings, but to develop a longer tale and story-arc over a longer period than either previous television entries or films. The Borg’s drones are not just blank slate warriors, but a mixture of patients and cadavers to be saved/scrutinised/ almost vivisected in the aftermath of their suffering. The not-on-a-network factor offers a looser approach and there’s one obvious F-bomb and an Irish equivalent in this week’s mix (and they’re never going to feel quite right or necessary in Star Trek – though it would take considerable effort to be offended by them here).

There’s still a lot of star quality and potential here and if the pace can pick up ever so slightly, the weeks are going to boldly go well… 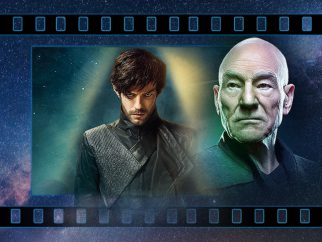