Nostalgic, no logic. 'Dark Fate' has female empowerment but no power...

Dani Ramos (Natalia Reyes) is a young woman working on an assembly line in Mexico City,  just about making ends meet: looking after her father and trying to get her brother a job at her plant. But today is a day that will change her life. Two strangers arrive in town – separately but quite spectacularly – and both with designs on her fate. In the next few hours, Dani’s life will be turned upside down  and many innocent people will die… because the visitors are from the future and Dani is very important to each of them. One wants to kill her, the other to save her.

But there are two other figures that Dani – and even the visitors – know nothing about and who will become equally invested in them and upcoming events. Sarah Connor (Linda Hamilton) successfully managed to change the future but found that the remnants of that averted timeline were still capable of causing tragedy and Sarah will stop at nothing to rid the world of the machines sent from beyond Judgment Day. And miles away, another figure seeks a strange kind of absolution of his own, to put right a past mistake even as he builds a life for himself.

All these figures are about to collide and find that while one future is gone, its replacement may be just as dangerous. But who is Dani and why is her potentially dark fate so important?

Terminator: Dark Fate, out on DVD this week in the US, (due in the UK from 2nd March) is something of a difficult movie to review because your satisfaction will largely be dependent on what your expectations are going in. If you simply want a nostalgia-fueled wham-bam-thank-you-ma’am outing, this is certainly a film for you. If you want more than familiar set-pieces given the modern washed-and-brush up for the masses, then it’s largely a missed opportunity, albeit fun enough in the moment.

The action sequences have all the requisite bluster you’d expect from a tentpole Terminator outing: explosions, chases, fights and mind-bending timelines tied together by a rotation of various suitable locations chosen for their ability to choreograph stunts rather than story logic or necessity. Factories/dams/military bases prove wholly interchangeable and suitable for collateral damage. A freeway motor-pile up is as well stage-managed as you’d expect, though once you’ve seen one drive-by explosion car-crash, there’s only so much you can do to make it fresh.  But there’s a suspension of disbelief required. Even for a fantastical outing, a sequence aboard a cargo plane is patently ridiculous and defies the basic laws of physics is such a demonstrable way that it lifts you out of the experience and exposes those sound-stage roots. (For example, characters stand on the ramp as the plane soars skyward with no visible means of support and barely a hair out of place as the back-protected city passes below them and when a few minutes later there’s a downward spiral towards terra-firma, people and objects fly through the air at different speeds with achingly obvious CGI and wire-work).

The new Terminator exo-skeleton effects themselves are impressive in execution but while the CGI is good, the actual powers of this new version seem inconsistent and somewhat arbitrary. The liquid-metal is an upgrade from the already ground-breaking Robert Patrick model, but when the story needs it Gabriel Luna’s Rev-9 can split in two, reconstitute himself, absorb other forms… and at other times, such skills fail when inconvenient and he is beaten to a pulp, before returning to the fray. He’s the unstoppable killing machine, until he’s not and then he is again. Gabrel Luna is an expressive actor and early promise that his bad-guy might actually have some faux-charm in his human form quickly dissipates when he becomes just a relentless pursuer that, frankly, could have been essayed by anyone who was friends with the SFX department. And that’s a shame because there was huge potential here to play up the human experience rather than just a conveyor belt of carnage. A Terminator who can supposedly access the entire internet and look like anyone he’s come into contact with…wouldn’t  have proved a far more interesting threat if he blended in more, subverting the chases rather than juggernauting his way through the masses as we’ve seen time after time (literally). Arnie’s creaky T-800 learns that, but a far superior model doesn’t?  (Suppose Luna had also played Dani’s brother earlier in the film… wouldn’t a pursuer who looked like family be instantly more chilling and dramatic?)

James Cameron and director Tim Miller (Deadpool) are presenting this story as if there had been no Terminator films after the original and T2 and to an extent that works – most of what came later was indeed a string of misfires and this is a huge improvement on the inferior sequels (though that’s a low bar). However the result feels like an episode of a reboot series that is brining back faces from the original for a sweeps-stunt. It’s not that the veteran talent isn’t wonderful to see, but it does make you miss their heyday just a little more.  Everyone knows their cues and has a string of their one-liners ready, but it’s not quite the primetime experience it used to be. Nostalgia is one thing and an important reason the film works at all, but the movie lacks that important connective tissue. Like Avengers: Endgame, there’s some nice human moments along the way and as action-movies go, it’s all acceptable as a guilty pleasure, but a lot of elements don’t really hold up to any reasonable scrutiny: The specifics of Grace’s enhancements, the T-800’s aging, the massive contradictions in the reasons that there have been changes to the timeline at all… all things that could have been far more interesting but are handled with a shrug and then rapid gunfire distractions… and one wonders if there’s a better film with al the same ingredients that could have emerged rather than one that acceptably ticks a long list of boxes.

But there are two things the film does well.

A good part of the film’s opening act is set in Mexico City and it establishes a colourful environment all too often painted as a landscape of dark cartels, drugs and poverty. Most of its initial characters are all people of colour, likeable and charming – and, with the exception of Mackenize Davis’ arrival, it’s quite a while before we see a caucasian face (and that comes with the sterile, brutal holding pens on the US border). This is the film extending its cultural landscapes and opening up the world and though we quickly move into identikit environments, it’s a compelling way to kick things off and get people invested beyond the cookie-cutter template we expect (and which comes quickly enough thereafter).

Notably, though without any pretence of subtlety, the other decision is to make this a female-led story in every conceivable way. Purists may bemoan a gender agenda and another genre outing that’s swapping out leading men for leading women… but that’s their problem.  As much as car gets wrecked and planes get exploded, the sight you might most see  is a collective shattering of glass ceilings. A grizzled, smokey-voiced Linda Hamilton brings the same level of generational gravitas and lifetime of regret to proceedings and Sarah Connor as Jamie Lee Curtis did for Laurie Strode in the Hallowe’en reboot and with around the same level of success in a film that equally doesn’t quite deserve it. Mackenzie Davis as the almost androgynous Grace is fine and handles everything thrown at her (almost literally) but is largely a servant to the plot which means she’s simply a cross between a lance and a shield for Dani (Natalia Reyes). Reyes herself shows some range, perhaps transitioning from quiet ingenue to tactically-savvy hero a little too fast but equally never seemingly intimidated by the baggage of her co-stars. The pace of the film doesn’t give them much time to do anything but react and play to archetype but it’s good to see such a strong female ensemble at all. (A thought: If Hollywood is finally embracing older female talent, then it could worse than put Hamilton, Curtis,  Sigourney Weaver and Helen Mirren together to do some blockbusting that could put pretenders to shame).

Though he makes a significant contribution at various points, if you are grading on a curve, Schwarzenegger is arguably the weakest link here. His whole appearance could have been a spoiler, but when he’s a significant part of the marketing campaign there’s little use pretending he’s not waiting in the wings.  He doesn’t arrive until late but when he does, it’s a seminal moment that plays to both the film’s strengths and fault-lines. This is distinctly Old Man Terminator rather than Biker Assassin, seemingly likely to shout ‘Get off my lawn…‘ as much as ‘Hasta la Vista…‘ It’s not that he’s bad (this is mid-range Arnie, much better than Expendables satire, not a patch on the likes of the somber Maggie) but it’s something of a tribute act performance, with even the in-story explanation of his presence questionable, his model’s motives and ‘life’ decided by the script-editor rather than story logic. There are some predictable jokes nodding back to earlier chapters, but you’ll see most of them coming. Arnold comes and goes when muscle is needed, half of the film’s two nostalgia-fuelled selling-points, and it’s telling that when he resurfaces at one point after a fateful confrontation a little before, you probably haven’t even noticed he’s been missing for the previous ten minutes.

You’ll likely come away from a screening of the film with the notion ‘That could have been a lot worse…‘ but an admission it could also have been a lot better.  It’s a film full of reverence, but – frankly – Miller does irreverence so much better and more of the Deadpool humour would have helped rather than the creaky catchphrase repetition. Cameron’s fingerprints are more in the form of giving proceedings his tactile blessing rather than breaking any new ground and with Avatar films seeming ever as far away, even as they multiply like tribbles, he’s a welcome and talented guiding hand but simply not the cutting-edge force we might expect- at least for the moment.

The Terminator influenced so many film-makers and action outings that it’s possible to forgive the fact that this feels like a reunion more than a reboot, a homage rather than a homecoming. It has nothing new to say, but says it with enough confidence and pitch to get you through its running-time with a smile and there’s a solid argument that you’ll enjoy Dark Fate for what it is if you can ignore what it isn’t…

It’s an adequate Terminator film – which is undeniably something of an improvement over recent attempts. 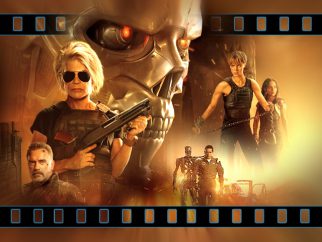 Who’s ‘Praxeus’ is a Wasted Opportunity…