The latest 'Doctor Who' episode has its charms, but its story loses some of its charge...

Nikola Tesla (Goran Visnjič) is a man with vision – sometimes fanciful, sometimes pragmatic but clearly a man ahead of his time. But when funding is pulled for his latest project, in no small part to the fearmongering of rival Thomas Edison (Robert Glenister), he thinks the day can’t get any worse. It can… soon ‘people’ are trying to kill him and he’s only saved from their pursuit by another stranger… one who calls herself The Doctor.

The Doctor is eager to know about strange things going on in the area, perhaps linked a large power-source that shouldn’t exist. But those pursuing Tesla are not of this world and they require him to help without giving him the option of refusal. Can The Doctor and Tesla dream up a solution alongside Graham, Ryan and Yaz… and might even Edison be convinced to help the cause, if only in the name of humanity?

Tesla, a scientist nd inventor finally getting credit for his the ideas that others borrowed, purloined or simply stole, has always been the sort of interesting real-life character that historical Doctor Whos do well… letting people ahead of their time actually meet people from ahead of that time. In that sense, this is an episode long in the making, but while fun in concept, the execution is a mixed bag.

Though clearly a massive improvement over last week’s unforgivably choppy episode, there are still some significant quibbles about this fourth entry in the latest run. The editing choices remains questionable: at one point we’re running through a basement, being pursued by a lazer-packing villain and then we’re suddenly bursting into a train carriage halfway to New York with the Doctor helpfully exclaiming ‘Here we go, perfect getaway vehicle‘ as if mere seconds have passed (it works well as a visual transition, but makes no sense on a narrative or logical level where the real time-difference between the two moments could/should be hours and it also doesn’t explain why Yaz, Ryan and Graham are already on the train, how THEY got there and the current location of the Tardis  – which the Doctor uses in New York with no explanation of how it get there and which Tesla doesn’t see until later). There also continues to be a lot of running around – okay, hardly a first for Doctor Who – but it’s becoming a hallmark of the Chibnall era made more noticeable when the number of locations really isn’t necessary except to *insert a few minutes of chase here* to pad out a rather incomplete script.

The casting is largely solid. Goran Visnjič (Timeless, ER), looking like a young Kevin Kline, is perfectly cast as Tesla and having studied his life at school in his native Croatia is able to imbue him with suitable quirks and character throughout and whose  discovery of the Tardis’ unique properties is met with suitable scientific exclamations. Robert Glenister – back in Doctor Who after several decades and this time in the role as Thomas Edison – is also able to make his role more than the moustache-twirling opportunist that early scenes suggest.  It could be the huge amount of prosthethics she has to wear but Anji Mohindra (best known for her previous role as Rani in spin-off  The Sarah Jane Adventures) positively eats the scenery as scorpion-like villainess Queen Skithra, an alien opportunist who looks exactly like a bargain-bin version of the Racnoss from The Runaway Bride and offers no real depth to a one-note pantomime performance – and whose cosmic scavenging and chicanery is there to mirror Edison’s dubious practises.

Indeed, the essence of the story is, in and of itself, fine, it just (as previously noted) feels very ‘old school’, an 1980s approach to the story-telling but with  decent 21st century FX. Chibnall’s Who continues to be writ large, the barometer swinging back to broadstroked ‘all-ages romps’ and an effort to win back the younger/family demographic rather than more discerning (sometimes overtly complicated) twisty sagas for the older viewers provided by Moffat. Capaldi’s incarnation gave us moments of passion and stillness, Tennant’s gave us quips but a growing darkness…. Whittaker’s – so far – seems to be leaning more to Matt Smith’s awkward and gurning  tenure but without the melancholy (though we’ll see where the Gallifrey story goes and how that changes her).

Unlike some, I certainly don’t hate the latest incarnation with a vengeance, but nor am I loving it with the passion I once did. For me, it’s too many characters given too little to do. It’s just feels like a show now openly relying on past glories and story-quirks and coasting a little on that nostalgia… a remix a little lost in its own time and space. Or, as Douglas Adams might have it: Mostly Harmless. 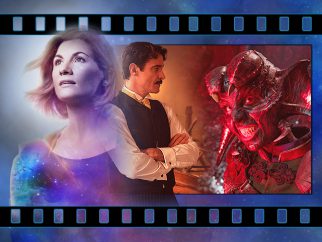 Mindhunter S3 is a terrible thing to waste…

Is a new ‘Kung Fu’ a Hobbs/Shaw thing?