The Doctor's latest trip is a far from well-packaged holiday...

With the Doctor still trying to process the news about Gallifrey – not to mention a rather drastic clear-up mess from a recent squiddish encounter (who knew it was mating season?) – perhaps there’s time for a holiday.

Graham’s rather eager construction of a travel cube spirits the team away to  an obscure leisure base where your every need will be catered for, for two weeks. But it seems that the base’s control systems have a literal bug in their system, one that may not have been placed there by accident. The Doctor and her ‘fam’ are about to find out that they’re going to experience a far from relaxing break, especially when the planet’s devolved native inhabitants find a weakness in the spa’s barrier system…

The Doctor’s history with vacation-spots is, well…spotty at best, rarely resulting in anything less than a battle for survival. Sadly even on a dramatic front,  Orphan 55 has non of the emotional impact nor stellar performances of the vastly superior Midnight, hampered at all turns by bizarre production decisions or problems.

This is an episode where the very construction seems to falter, bloated in one way, streamlined in another. FX-wise, the Dreggs have a nice enough  retro-design – best when partly hidden in the shadows, worst when CGI’d – but the amount of repeated close-ups betrays the budgetary element (and their whole concept seems to vary between devolved humans and some hugely-intelligent species than can adapt to attacks – something they stop doing quite quickly). The large ensemble cast is also problematic .  The dog-hybrid-like Hyph3n (Amy Booth-Steel) is there for what is essentially one joke and  has a costume/prosthetics that are positively shameful when compared to far superior animalistic efforts in the Tennant era and would be more at home in the McCoy era or even Spaceballs. The disappearance of Benni (Col Farrell) early on, only ever ‘heard’ thereafter, is a weird decision that feels like it was forced to cover some production problem – something made more likely when you note other haphazard editing and inconsistent ADR work combined with so much happening just off camera throughout. What could have been an instant heartfelt senior-relationship between  Benni and Vilma (Julia Foster) never delivers the emotional wallop it deserves (largely due to that separation) and is ultimately a waste of good actors who become little more than off-screen cannon-fodder.  Equally, James Buckley (of The InBetweeners) as  Nevi and Will Austin (from His Dark Materials) as Vorm  are a needless addition to proceedings, there to add a few minutes of screentime but who could easily have all their scenes exorcised with very little effect to the plot.

Ryan, probably through no fault of  Tosin Cole, is often portrayed as the tin dog of the team, each script using him, at best, for exposition and at worst as a rather thick punching bag. At least Ed Hine’s script gives him some early funny moments at the expense of a truly absurd ‘virus’ symptoms that scream Regency-era Blackadder. Bradley Walsh, proving to be a dab-hand at organic one-liners is also well-served in the first-half. Mandip Gill’s Yaz is once again under-served.

The revelation that the Orphan 55 of the title is the planet and that it’s a future  Earth should be a big deal, but the problem is that the series has used this sleight of hand before and as we know there have already been different episodes set in different futures the scales don’t feel quite so heavy as they should be, and – indeed – the ‘one possible future’  feels like another ‘get-out clause’ and not usually how Doctor Who‘s (admittedly contradictory) rules usually go. Even in a week where we’re watching real-life metereologial events including continent-wide fires in Australia, tornadoes and earthquakes, the ending monologue (delivered well enough by Whittaker) and its message about caring for the planet seemed a little too much on the nose, forced uncomfortably into the epilogue and  preaching to the audience rather than talking to her ‘fam’.

All in all Orphan 55 has some decent ideas but is compromised here by the fragmented way it (doesn’t) hold together and the growing tendency of the new era of the show to put pace (run here, run there, run… somewhere!) before plot-logic and action before attitude – and it eventually comes across as a very ‘first-draft’ version of a story or first-cut of an episode that needs far, far more work to make it even adequate – full of  good intentions but marred by a hopelessly messy and somewhat amateur delivery. 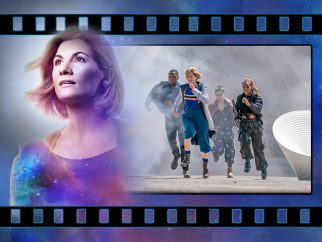