'Watchmen' redefined comics - did the two ambitious 'sequel' mini-series rise to that heritage?

It’s 1921 and a race-crime rises to the level of wholesale massacre as  Tulsa is torn apart by attacks that will cast a shadow down the decades… and a young boy survives a day he will never forget.

It’s 1985 and Nixon is still President, the Watergate scandal never happened and the world stands at the brink of war. A genius madman kills his former team-mates one by one… and then thousands of innocent bystanders in a purposeful and long co-ordinated plot to secretly save the world from itself…

It’s 2019 and America has  somehow managed to survive but hardly thrive. Vietnam is the 51st state, Robert Redford has now been president for thirty years, race-based reparations for past atrocities mean black people don’t pay taxes, guns are largely banned (even to many of the police) and the law-enforcers hide their faces and identities behind masks after devastating attacks by the ‘Seventh Cavalry’ agitants…  and the armies of order and anarchy threaten the various shades of the American dream whichever side you’re on.

And other forces are gathering, connected and disconnected by time, geography, age, perception, fury and anger. The fate of the world may once again be in the balance and this time, masks and skin-colour may only be the touch-paper of a far more explosive set of agendas…

The Clock is ticking towards Doomsday once again…

You can’t make an omelette without breaking some eggs and as HBO‘s Watchmen ended to the bizarrely appropriate tune of the Eggman and the Walrus, only one thing was certain…. that fans of the original comic and graphic novel will likely have remained divided on this semi-official sequel. The same is true for the separate Doomsday Clock follow-up in comics form…

You don’t have to be a fan of the original Watchmen to enjoy either. Actually, that’s a lie: it’s probably a necessity.

It’s the 1980s and the business is revolutionised the format with a visually complex, deeply layered story about power, paranoia, revenge and salvation… and it forever buries the notion that comics could only ever be for kids. The 12-part masterwork, subsequently collected as a graphic novel that has remained on prestigious literary best-selling lists for decades. Though artist Dave Gibbons’ name is listed as a consultant, you won’t find writer Alan Moore’s credit anywhere on HBO‘s Watchmen adaptation. Moore infamously divested himself of any interests after bad-dealings with Hollywood and has been known to invoke legal means should anyone use his name in publicity. However, it would be churlish and counter-productive not to cite his name here. Moore’s words and Gibbons’ art were perfectly balanced and each essential elements of an epic story that celebrated not just classic science-fiction but the very nature of the printed comics medium. To even attempt to move it to other media, such as the screen, was, Moore argued, high folly if not a high-crime. Even high-concept auteurs like Terry Gilliam eventually agreed it was too much to compact down to a two-three hour one-sitting experience. When Zack Snyder did eventually make the feature-film in 2009 he did a better job than some expected but his over-reverential take arguably presented Moore’s basic arguments in high definition. Without the 2D tricks of the trade (strategic panel layouts and fearful symmetry reflecting story elements), the live-action adaptation merely became something of a ponderous affair.

It’s 2018  and news is made with the announcement that a Watchmen series is coming from HBO. Damon Lindelof (LOST, The Leftovers) will helm it and there is a decidedly mixed reaction, one not calmed by the announcement that this would not actually be the Watchmen story we knew but a new experience based on the style, ideas and some of the characters therein.  It would not be quite a pure prequel or sequel per se…. but could it ever hope to be an equal? Some, indeed many, felt that taking the name and doing something different was somewhere between blatant opportunism and abject hubris. Then again, the counterargument went, hadn’t Moore himself  done exactly that – repurposed old comic and literary characters for his own myth-making and to hell with the original intent?

Some will have hated it before a single frame debuted, seeing it as tantamount to sequential art heresy. Others will have given the venture a fair shake and scrutinised it all with intensity, finding every unforgivable fault-line or enigmatic easter-egg with equal vigor.  But if you were coming in cold to proceedings, you might well have been left scratching your head, even as the various threads finally intertwined for the finale.

The HBO mini-series certainly drew considerable elements and themes from the original story (and to a lesser extent the style of the Snyder movie), but Lindelof, directors such as Nicole Kassell and HBO – against the odds – succeeded in creating a thematic follow-up that positively hums with bonafide high-brow ambition, even if sometimes floundered… and that in itself is rare, even this golden age of television. And like it or loathe it it’s a unique result that almost defies easy category.

It’s December 2019: There’s a solid argument that the mini-series juggles too many concepts and is tonally difficult to get a handle upon – early episodes seem to fly in abstract directions and later entries zoom in on specific characters and their backstories, creating an uneven momentum. But one would have to be particularly stubborn to dismiss the actual result, flawed though it may be, as a wholesale failure… because it’s undeniably powerful, sweepingly stylish and full to the brim with righteous fury and mystery. It’s also historically poignant, more than a touch surreal and yet arguably one-part utterly different and one-part as culturally-important today as the original comic was to the particular vibe of the 1980s.

If paranoia was the main ingredient of the 1980s story, race-relations formed the backbone here. And, arguably the master-stroke here comes in the opening minutes where Lindelof’s story opens in Tulsa in 1921 and the site of a sadly all-too-true racially-driven massacre (one that it’s likely a majority of Americans have never even heard about or simply noted as a historical footnote rather the massive atrocity it was). Those events  may seem a century away from the events that follow, but the story shows that there’s a through-line, however invisible some of the key threads remain as yet. With a fearful symmetry, murderous events in modern Tulsa bookmarked proceedings. Racial divisions define an American tale with an (eventually) alternate history than ours, where Nixon retained power for longer because no Watergate scandal ever made it to the presses and yet in the wake of events in the 1980s that took the US and Russia to the brink of nuclear war, one where Robert Redford became and remained President for decades. But while the milestones are different, the footnotes are not.

Watchmen 2019 almost has too much to say. Lindelof is no Moore but he didn’t enter into this lightly and there’s definitely a blueprint here that speaks to planning out his story, with a beginning and ending – the lack of which was a criticism of his past work. There’s also a timely tinderbox at work here and pointed coverage of the absurdities of taking Left or Right ideology too far. Far Right conservatives will chortle and gesticulate at the depiction of a country where there’s a six month wait for guns and even the police have to ask official permission before drawing their locked weapons. But the Far Left will point to the violent vigilantes, the rise of unchecked white supremacists and the danger of tolerating or ignoring their threat. Lindelof’s script deftly skewers both with both a pen and a lens sharpened and cleaned for the purpose.

Regina King as Angela Abar  – ‘baker’ by day, something else by night  – is central to the story and grabs the potential of her complex character  – both physical and psychological – and runs with it. But she’s ably supported in the opener by the likes of Jeremy Irons as the presumed-dead Osymandias and an unexpectedly nuanced and compelling performance from Don Johnson as Angela’s mentor chief lawman Judd Crawford in early episodes.

The opening episode resonates with the ticking clock of Watchmen but also feels like Roots by way of The Purge,  Orwell’s 1984 orchestrated to the soundtrack of an alternative Oklahoma! with all the contradictions built-therein. For once, the seams between are not obscured, but fully embraced, spotlighted and then brought together in high definition. But by the time the mini-series reaches its end, it’s a different animal entirely – or maybe not… there’s the discussion to be had. It’s surreal, self-indulgent and complicated, but it’s certainly memorable and powerful in its own way. 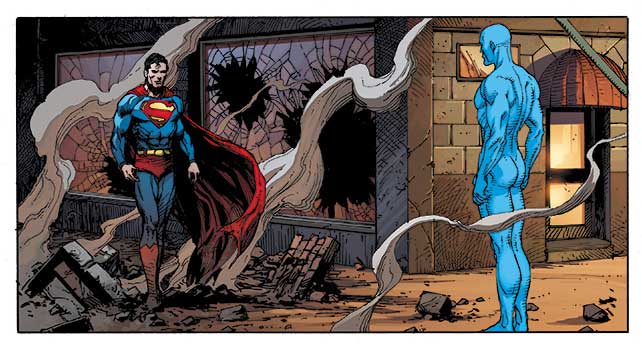 ‘Who’s Reading the Watchmen?’ is a different but just as interesting a question as Who’s Watching the Watchmen? DC‘s current attempts to produce a kind of Watchmen sequel on the printed page – Doomsday Clock – is equally ambitious but might have been better if it had been delivered on time (the bane of modern comics who see deadlines as a theory rather than an imperative) though there’s an unintended synchronicity at them ending together of which Moore might approve if he had cared about either. The comics publisher used the project as much to sort out its contradictory comics history as it did to revive Watchmen conceits and the final twelfth issue, produces some memorable iconic moments but relies heavily on nostalgia – no pun intended. (Though there’s some dialogue in the comic that points to a possible Marvel/DC collaboration way down the line?) There will be those who love Watchmen and Dr. Manhattan’s collision with the DC universe and those who think it is just as much metaphysical mumbo-jumbo and perhaps – once again – neither are wholly wrong.

Both televisual and printed-page mini-series were interesting to experience, a look at our present through the prism of the past (or maybe vice versa). The fact that people are talking about them and expressing strong sentiments on both sides makes them worthy of having been tried at all.  Yet maybe they are also proof-positive of the notion of the maxim, ‘You can’t go home again…‘ and these separate and interconnected love-letters and eulogies to a classic should now find some rest, never to be repeated, continued, dug-up, polished-off, rebirthed or continued however tempting or nice the decorations and prestige along the way. 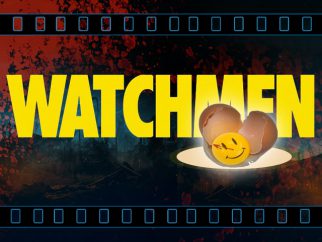