'Friends' aren't what they used to be in the latest mandalorian escapade...

Still needing to finance his travels, The Mandalorian seeks out the base of an old associate who wants the warrior and his ship to free a fellow colleague who is being held in a space-prison. But it won’t only be the armoured droids and robots that will prove the biggest obstacle – there’s the problem of his fellow mercenaries who form part of that ‘rescue’ mission. Breaking in may prove easy, but surviving the various agendas at work in his own ‘team’ will be another matter entirely…

The sixth episode of The Mandalorian is entitled ‘The Prisoner‘ and it all feels like an Expendables-tinted Guardians of the Galaxy outing with a brisk Doctor Who-paced story  on a extended Firefly budget. It’s packed with guest-stars with strong name recognition. Bill Burr does his best Jason Statham-impression as mission boss Mayfield. Harry Potter‘s Natalia Tena as a possible old flame (and definitely psychotic team-member) named Xi-an and  Clancy Brown (Highlander)  as less-than-gentle-giant named Burg are both buried under prosthetics and almost unrecognisable. The IT Crowd‘s Richard Ayoade provides the voice for the remaining mercenary, a droid named  Zero. There’s the requisite banter and mercenary machismo and all the hard-assed posturing of a group who might not actually want to be together but need each other’s expertise. But, in many ways it feels like the best episode to date, or at least the most fun – albeit still relying on those familiar archetypes and mythological touchstones as if it’s termianlly worried that we should ever forget which far, far away universe we’re in.

There’s a lot to like here. There’s some nice dialogue in the mix and plenty of scenes littered with explicit Star Wars mythology references, images and audio cues. (There’s a insult thrown in Jar-Jars’ direction, a familiar-looking corridor fire-fight  and when a fellow mercenary is described as an ‘imperial sharpshooter’, the ‘That’s not saying much…’ retort brings some choice observation of stormtrooper marksmanship or the lack of it). The episode SFX are good, with the space-based landing bay well designed and some good landing/take-off perspective effects and some fun shootouts in between in well-lit corridors.

I’ve said this before and sadly I feel the need to continue doing so… however fun The Mandalorian  is in the moment – and, yes,  it can be –  this is a show that’s demonstrably coasting on its Lucasfilm budget and nostalgia, offering absolutely nothing new to proceedings that lingers long in the memory; a long list of love-letter homages to far superior fare and all too often feels like the filler episodes of a far grander experience. This is an ode to marketing: essentially asking us to invest (financially and emotionally) in what is little more than the glossy adventures of an action figure and a plush-toy. Apart from the continued coo-ing over said short green plushie, there’s simply no emotional anchor here, no innate charisma, no real investment to be had. Pedro Pascal, if indeed it’s even him in the armour at any given moment, records his dialogue in bite-size chunks of sheer apathy with nary a hint of emotion, which is ironic given the character’s dismissal of droids and robots.  ‘Mando’ is supposed to be a morally-ambiguous independent operator, but it all feels more boredom – with his story and script reading more like fight-directions and he’s hardly got the demeanour of a imposing fighter (regularly getting lucky rather than smart). At least here we see him outwit his pursuers rather than just dodging bullets.

Bottom-line:  I can smile at the in-jokes, I can nod at the pixel-work and appreciate some of the choreography, but I’m really not sure I’ve actually cared about anything or anyone in the show as yet because it really hasn’t offered up anything other than shiny but derivative set-pieces to care about. For instance the last few episodes could have been shown completely out of order and it wouldn’t have made any notable difference to the free-floating characters, their almost non-existent development or story-arc – and whatever way you choose to slice it, even if you’re a forgiving die-hard fan just here for the pretty scenery, that’s pretty revealing about the state of the creative quality threshold for what should be a benchmark of quality . 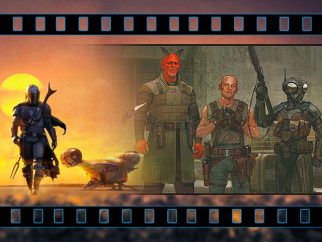