Not perfect, but always engaging, the 'sophomore' year of 'Star Trek: Discovery' has a packed DVD release...

If there’s one thing we can all agree on it’s that opinions on sf shows can be divisive. In recent times, Doctor Who and Star Wars  have seen their fair share of brickbats, bouquets and binary stars aimed at current efforts and if you can’t please all the people all the time, the production departments are certainly doing their best.  Star Trek: Discovery is no different – poured over by new fans and old, some liking what they see, some more critical. The story of a previously unknown Star Fleet vessel with an unique propulsion system and its voyages to where no man had yet gone before – set years before Captain Kirk made his mark – got a lot of attention on its launch, appearing on Netflix in the UK and helping launch the CBS All Access platform in the US.   It’s true that the first season of Discovery had its problems – long in production, changes behind-the-scenes before it aired and the first Trek to beam in from behind a pay-wall subscription service didn’t help. The general review of the result was there was a lot of fun and problem good ideas but an inconsistent tone. With some major developments and revelations, viewers wondered where the series would go in its second run…

One of those revelations was the appearance of the Enterprise, still at the time under command of Christopher Pike (Anson Mount) and it was clear that the appearance of the vessel and the character (as well as a certain pointy-eared Vulcan science officer) would add some retro-sparkle to proceedings. It turned out that the characters would be hugely important to the developing story-arc that unfolded in the ‘sophomore’ season, originally broadcast earlier this year. It was an arc built on a galactic mystery, some time-travel shenanigans and – yes – a different ‘Search for Spock’ (Ethan Peck). Along the way there was more from duplicitous Section 31, veteran international star Michelle Yeoh in fine form and trouble from within as a larger conspiracy was revealed.

It was an ambitious, star-spanning effort with a raft of good performances and some stellar special-effects, though there were arguably some problems in the pacing with several episodes that tended to extend the plot rather than explain it (and often merely end up complicating it).  Peck’s Spock was marketed as a big deal, so keeping him as an off-screen tease for the first third of the season – frequently referenced and discussed but not seen – really makes no creative sense and his absence becomes annoying rather than suspenseful. The larger season-long story-arc of the ‘Red Angel’ and the mysterious galactic lights are also a bit problematic. Time-travel can be its own nightmare as a story element, but here the later revelations aren’t as surprising as the writers want them to be and some of the story logic, even in the broadest sense, disappears down a black hole the more you think about it.

But if there’s foibles in the framework and some slippery moments in the scripting, when it comes to performances, there’s really no weak links. The main Discovery crew are now comfortable in their roles and have developed their repartee. If occasionally the individual entries allow them to fall into archetypes (Mary Wiseman’s Tilly being the well-intentioned scatterbrain, Doug Jones’ Saru being enigmatic and Sonequa Martin Green’s Michael Burnham finding weekly moments to kick-ass and then weep) then the actors still make us care and they balance the character-moments with the moments of high-action.

For a show that’s built around the starship of the title and its crew, there’s some irony that the true revelations here turn out to be Anson Mount and Ethan Peck, both on loan from the Enterprise and essentially kickstarting their campaign for their own retro-fitted spin-off.  (Seriously, it can only be a matter of time now). Mount gives us a wonderfully stoic, dutiful captain but one to whom he gives depth and heart.  Peck’s Spock is played both with angst and whimsy and sees the actor successfully channeling the character rather than just imitating Leonard Nimoy or Zachary Quinto.  Add those quality special-effects and solid direction throughout and the Discovery experience is certainly an improvement from the already-decent first run while still grading on a curve as it warps towards a potentially very different third run early in 2020.

In addition to all fourteen episodes of Season Two, the  DVD set – out in both the UK and US this week – contains two of the Short Treks (though, it would have been nice to get all of them, Runaway and the Doug Aarniokoski-directed The Brightest Star are the two that most relate to Discovery directly). There’s also over two hours of extras in the form of various featurettes and some interesting behind-the-scenes looks at the challenges facing the production crew, not just in relation to Discovery‘s designs  but also in the pressure of recreating/reimagining  the classic Enterprise bridge within the context of the new show. There’s also an obligatory gag-reel and a few deleted scenes along the way.  Several episodes have commentary from the likes of stars Sonequa Martin Green, Anson Mount and Ethan Peck, director Jonathan Frakes and show-runner Alex Kurtzman and though it would be nice to have such for every episode, the commentaries for the four on show demonstrate the camarederie that’s developed.

All in all, it’s a good package, well-representative of the show catering for both the die-hard fans and the more recent converts… and will see us through nicely until the third season arrives (along with the much-anticipated Picard) 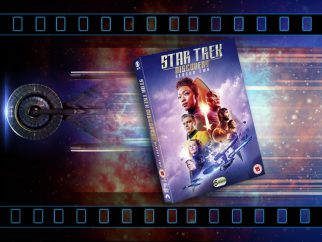