'His Dark Materials' may be hard to adapt for tv, but the latest version starts well...

A baby girl called Lyra is left in the care of Jordan College, Oxford as her previous guardian – Lord Asriel (James McAvoy) vanishes into the flooded grounds and night, telling the learned custodians at the door that he is invoking scholastic sanctuary for her. She can not, must not be harmed even by the Magisterium who rule this universe’s British Isles with a theological zeal.  In the years that follow,  Lyra’s existence remains a secret as stays within its walls and she only sees Asriel at irregular intervals, however she years to join him on his adventures in the Far North.

Over a decade later, Lyra spends her days chasing around the college corridors with her ‘daemon’ – the spirit animals that bind themselves to humans  -and full her boundless enthusiasm is extended further when Asriel returns. But he has not come directly to see her, but to give proof positive of an amazing discovery he’s made and one he needs further funds from the college to continue. He has glimpsed something in the Northern Lights that could transform the truth of not just this world, but others beyond. It’s a truth that scares some of Jordan’s illustrious academics as much as it excites Lyra and it becomes clear that Asriel’s life may be in danger.

But Lyra has her own part to play in the days that follow, some of her own making, some borne of prophesy – her presence and existence of equal import to others. As seemingly random children across the realm are snatched away, the teenage Lyra (Dafne Keen) meets the enigmatic Mrs Coulter (Ruth Wilson) who has her own plans in play beyond the spires…

A quest is about to begin, and some people have gifts, some people have advice and some would rather see her fail. But by the time it is done Lyra will have journeyed farther than she could ever imagined and may still have to make the hardest of decisions…

Making a bigger splash in the UK than internationally, the His Dark Materials trilogy (Northern Lights, The Amber Spyglass and The Subtle Knife) were published between 1995-2000 and though arguably overshadowed in the marketplace by the works of J K Rowling, they were often reviewed as far more complex and cynical than Harry Potter‘s wand-waving adventures. The sort of ambitious literary epic that was less enamoured with the sheer spectacle of wizards, witches and warlocks and instead in multi-world building, the books tracked the despicable machinations of man (and woman) starting in a universe a little different from our own.  Yes, amid the spires of Oxford and London there were talking creatures: daemons (or flesh-and-blood spirit animals), the sky was full of air-ships and the talk in darkened alleyways was of ‘gobblers’ who might steal your children…but the main thrust of Pullman’s subversive trilogy was in the tribal nature of the human condition and just how far ordinary people will go to find the truth or, alternatively, obscure the extraordinary.

New Line released a diluted feature film based on the material as The Golden Compass in 2007 which met with less enthusiasm from purists and audiences in general. Ironically, it’s immediately clear that the new, televisual adaptation of the works (including an opening that appeared in one of the subsequent prequels tomes) is something better and certainly more than the average Sunday night slot often offered up by the BBC (it’s subsequent next-day broadcast on HBO indicating the level of quality and depth one can expect). There’s clearly a massive pot for the budget, one that has been spent on an all-star cast but also in that world-building through interesting production design, SFX and a broad sense of scale.

Those talking animals could be problematic, but they are used sparingly and rarely fall into the cute factor that Disney would insist upon. It’s tempting to see their very presence as  ‘Young Adult’ material (as it is now branded) but neither the books nor the tv series pander to such a demographic, quite the opposite – Philip Pullman demands they keep pace with him, not the other way around. Pullman, a well-known atheist/agnostic, is clearly at home writing work that spotlights the control of knowledge as true power and how faith can be corrupted, branding anything that disagrees with it as heretical. His ‘Magisterium’ takes on aspects of more extreme elements in the Catholic and Christian churches and the very title and some elements of the story come from text within John Milton’s equally epic and somber Paradise Lost. In short he takes the format of an epic all-ages tale and asks some for-the-ages questions of his characters and audience, but never foregoing the sense of whimsy that is needed to grease those wheels.

With some of the larger-scope aspects of magic and science colliding, the visuals take care of themselves (or, rather, are handled with aplomb by the SFX department), but the cast needs to be impressive as well – and thankfully they are. Dafne Keen, so effective in Logan, centres the plot and embodies a mix of impulsive curiosity and sense of justice that’s needed for the role of Lyra – a role that seems like a counterbalance to Millie Bobbie Brown’s Eleven by way of a Richard Curtis film. James McAvoy, consistently proving he can go from high-brow to crowd-pleasing mainstream and back as he wishes gives us a somewhat arrogant and diffident explorer in Lord Asriel, but one driven to finding the truth rather than one without heart. Ruth Wilson (Luther, The Affair) as Mrs Coulter often essays equally complex characters and here she’s as good as ever, in turns charming and sinister as Lyra’s guide into the world beyond Oxford’s sanctuary of spires. Anne-Marie Duff (Shameless, From Darkness) plays Ma Costa of the Gyptians, searching for her abducted son with just the right amount of earnest indignation and pain. The Wire‘s Clarke Peters gives weight to his scholarly position and Highlander/Braveheart‘s James Cosmo is as large, imposing and hairy as ever. In the weeks to come we’ll meet other eclectic key characters played by the likes of Sherlock‘s Andrew Scott, Poirot‘s David Suchet and Hamilton‘s Lin-Manuel Miranda.

Ambitious, magical, layered and dynamic, there’s much to recommend His Dark Materials. Yes, there’s a lot of groundwork to be nailed down in the start and a peek at future episodes suggests it’s going to take its sweet time revealing, explaining and experiencing those nuances and seismic shifts as we proceed. But if not perfect, it all feels investing your time will be worth the effort and there’s enough general momentum and glimpses of dust-sprinkled wonder to keep younger viewers interested and older viewers satisfied for the moment. 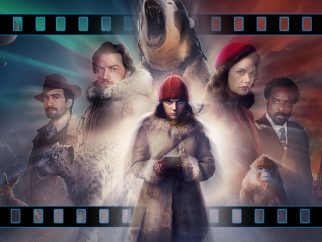