Centuries after a virus decimated the world’s population, the few survivors cling together in distant enclaves, trying to survive in a world that has left them alive but blind.  To even speak of the days when people could see is considered heresy and ‘witchfinders’ patrol, often leaving entire camps destroyed.

Baba Voss (Jason Momoa) is the chieftan of the Alkenny Clan, a fearless warrior and excellent close-quarter fighter. Several months ago a young, pregnant woman entered their camp and Voss took her as his wife, willing to accept the children when they were born. But when it becomes clear that their real father could be a pursued heretic, the camp garners the attention of the Witchfinders.  When the babies are born and it becomes clear that they can see, they garner even more attention and miles away, Queen Kane (Sylvia Hoeks) talks to God and conceives plans to snatch the children away…

Game of Thrones might be over, gone in a controversial cloud of foreshortened dragonfire, but there’s quite obviously a race on to claim the abdicated high-concept, rough-and-ready crown with no shortage of pretenders trying to persuade us of their right to reign.  The same is true of a relentless slew of new streaming platforms facing their own trials and tribulations in a busy marketplace. See, one of the premiere series out of the gate for new player Apple TV, certainly stakes its claim with intent if not wholesale execution.

The big question is whether the major hook of this concept – the lack of sight in any of the main cast of characters – can withstand the obvious restrictions it places on the story and how it’s told. On one hand, there’s clearly been admirable thought and consideration put into some of those related aspects.  The tribe’s fighting style, often up-close and personal – has obviously been worked on by a choreographer who wants to explore the changes lack of sight would bring to combat and it’s refreshing to see something different from the popular, but often-overused wirework. Conversations are carried out in close proximity to each other and other forms of communication are established. Equally, there’s guide-ropes strung across the main camp which help people get around and find their way and acoustic additions like wind-chimes and horns that prove far more practical than mere decoration or ceremony. It’s exciting to see such restrictions embraced as opportunities for creativity.

Steven Knight (who directed Hummingbird and Locke and has written for Peaky Blinders and Taboo) has a good track-record. But here his necessary world-building immediately becomes problematic by the sheer size of its obvious ambition. A little like Costner’s infamous Waterworld, some of the internal logic quickly gets fuzzy and ignored when inconvenient to the bigger-picture that must follow. Centuries after civilisation collapsed, there still appear to be familiar-looking water-bottles available and however well-adapted a civilisation might become to a disability over time, the idea that the Alkenney tribe could construct a wall of stones ready to collapse or even fashion the swords or clothing that work so well seems to be inherently unlikely to quite the degree shown here. If this feels like nit-picking beyond the suspension of disbelief, then by the second episode we’re on to the foundling clear-visioned children learning to read English from books. In this scenario, it’s not the technique of a reverse-braille, but more akin to me teaching you Egyptian hieroglyphics having never seen them before and not only achieving that wonder but also conveying all their nuance. It’s a contrived and silly element, but a necessity of the plot that also encompasses myths, visions and talk of reshaping the world.

It’s ironic that one of the strengths of the show is the impressive cinematography, viewers allowed to see the swooping shots of mountains and rivers and so long denied the main characters. While clearly utilising the Canadian wilderness for its locations, the series boasts a budget for such that will likely make other ‘North-Hollywood’ productions of Vancouver feel envious. Flame-lit chambers look very imposing, full of long and dangerous shadows… just as long as you don’t think about how the candles and flames are maintained or why they are actually there at all. And that’s a continuous problem, once the production-design strays away from necessity into flourish, the illusion is lifted and however pretty, it’s superfluous to requirements.

It does feel like there could have been an internal argument over the tone of the show, one moment setting out to shock and at another all too conspicuously conventional. There’s violence, always brutal and sometimes gory but otherwise this feels like someone saw the CW‘s The 100 and decided to strip it down to more earthy basics. However, there is also a deliberate decision to be provocative and nothing quite embraces controversy like watching a woman masturbate as she talks to God. If it’s meant to shock – and it clearly is – then it wobbles on a tightrope between depicting something primal and powerful and something merely there to get people talking about Aquaman‘s new show around the water-cooler. There’s not quite the equal courage of its convictions: for example, when it comes to actual nudity, Star Trek: Discovery‘s Yadira Guevar-Prip as ‘Shadow’ moves with the grace of a ballet-dancer through the undergrowth, clearly ‘unclothed’ but somehow always with just the right strategic angle or body-paint. That’s a totally fine creative decision, but it’s tonally uneven with the explicitness elsewhere and SEE really needs to decide how much is coy flirtation and how much is genuine bravado.

Cast-wise, there’s some familiar faces going through their paces. Momoa is an impressive presence in everything he does, possessing an innate charm that equals his intimidating build – but far too often he’s being given roles that simply require the latter. As chieftan Baba Voss he fills the screen but largely has to growl, shout, frown and beat people up, essentially essaying the character as a hairy, grunge-based Wolverine. Alfre Woodward as Paris, the Alkenny’s witch/doctor offers reassurance and exposition but the award-winning actress is given a less than spell-binding script from which to work. Blade Runner 2049‘s Sylvia Hoeks is Kane, the aforementioned royal fingersmith and she gives us a matriarchal mad-hatter and bonkers queen seeking the sighted children, mustering zeal and loyal henchman with all the gusto of some Disney villain who has just discovered an olde audiobook for  Fifty Shades of Grey.

See is the name of the show, but it could also be over-all grade it receives for its pilot. There’s certainly potential there and no shortage of unapologetic ambition, but for a core idea that screams out to be more suitable for an emotive radio-play than a visual feast for tv, its reach may exceed its vision… 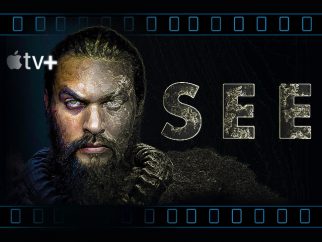 The Bannon roars: EPIX confirms more from ‘Pennyworth’ and Co….