Netflix's latest horror outing feels like a staple scary story, but it has a couple of surprises...

Eli (All the Money in the World‘s Charlie Shotwell) dreams of open fields and happy family parties, bu his everyday life is less happy. He’s kept either in a bubbled enclosure, away from the germs and modern day afflictions that might harm him, or wrapped up in a walking hazmat suit for the same reasons. Now his parents Rose (Yellowstone, True Detective‘s Kelly Reilly) and Paul (The Purge / NCIS: Los Angeles‘ Max Martini) are on the road with him, taking him to the converted stately-home retreat of Dr. Horn (screen veteran Lili Taylor) whose radical treatment may be Eli’s last hope of getting beyond the confines of his .

But soon after Eli arrives at the isolated house he begins to glimpse shadowy figures and strange nightly visitations. Despite the concerned looks of his parents, Dr. Horn says that hallucinations are a side-effect of the three-part cure. Eli is not less convinced, especially as his experiences get worse and he begins a conversation with a young girl Hayley (Stranger Things‘ Sadie Sink) who talks to him through the sealed conservatory’s windows to the outside world and explains that he’s just the latest in a long line of ‘patients’ who seem to vanish after the third part of their ‘cure’ is administered.

Determined to find the truth, whether his parents believe him or not, Eli begins to search the home beyond his attic room. But everyone may be shocked by the answers they receive when the truth of the house’s secrets are finally uncovered…

Kids and psychological thrillers have always made good bad-company –  the idea of a child or adolescent proving to be first a possible victim and then be more resourceful against a dangerous adversity or perceived threat than the well-meaning adults, is a solid staple of the horror genre. They are also just as capable of being the threat – with casting choices often key to how we perceive them. From Chucky through Brightburn, there’s a range of choice and quality.

All the traditional elements are there within the first act of Eli: the checklist reliably ticks off: the spooky house (looking a lot like a brushed-up …Hill House blueprint with shiny additions), a dodgy doctor, a scared child, parents with secrets, a stranger whose motivations are unclear and a raft of things that go bump (and worse) in the night. No real surprises in the foundations, then…we know we’re on familiar ground and we’ve been here countless times before in one form or another. While audiences can see something is obviously askew, it doesn’t seem to be a matter of the ‘if‘, but the ‘what‘ and ‘why‘ and the journey will be the task of piecing together the fuller picture.

The use of shadows, reflections and camera-pivots might also be wholly (unholy?) traditional, but after establishing the premise in the first act, in the film’s second act the ‘scares’ are telegraphed with decent timing and choreographed well enough to please the audience rather than terrify them. There’s writing on the window, a figure in the mirror, another lurking behind a curtain and…oh-oh… some interestingly suspect wordplay with Eli’s name. As an audience you know that all the supporting characters have an agenda and the question becomes which if any of them fully include Eli’s best interests. There’s obviously a reason to question Doctor Horn’s treatment and supposed ‘success’ rate and there’s quiet difficulties between Eli’s parents over a possible earlier infraction that questions their unity. However the unspoken frictions help the overall sense of dread that Eli seems to be feeling from otherworldly encounters.  Even the audience might be starting to second-guess what they’re seeing… is there a rational explanation possible? There’s evidence in both directions.

Shotwell is good in a role that initially sees him as confused as the audience and he carries the weight of that well enough. Martini and Reilly (the latter establishing herself in a variety of convincing American-accent roles despite her English heritage) provide ample support and Taylor has just the right air of disdain and superiority to make us wary of her from the start. Sink swims well in a role that’s purposefully enigmatic and which will make audiences interested in her own origins and purpose.

It’s towards the end of the third act where we start getting the answers that we need and it’s likely your mileage will vary accordingly on what you thought they’d be. It wouldn’t be fair to reveal the endgame, but there’s some  admittedly interesting mis-directions along the way. The fact we get those answers around the same time as Eli himself, does works to the film’s benefit, but ultimately this finished package falls somewhere between ‘better than you might be expecting‘ and ‘not as great as it could have been…‘

Somewhere there’s a slightly better version of Eli waiting for the Hammer to fall and where the pieces glide into place more elegantly rather than being slammed together with the resonating ‘Aha!‘ factor. As top-list horror it’s probably found  a little wanting and the difficulty in marketing it accordingly is what probably led to a Netflix debut rather than theatrical run…  but as a B-List horror with greater aspirations it actually serves up a half-tasty result. 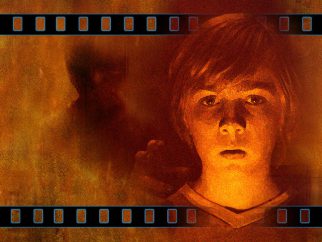