The brain-munching 'Zombieland' was a guilty pleasure, but its decade-later sequel is far too late for dinner...

Ten years after  Tallahassee (Woody Harrelson), Columbus (Jesse Eisenbrg), Witchita (Emma Stone) and Little Rock (Abigail Breslin) somehow survived the zombie apocalypse, they’ve continued to make their way through America, cutting down any of the undead that get in their way – sticking to their rules and routines for survival.  Realising the world is their oyster, they take up residence in the now derelict White House but even the stylish surroundings don’t mask the fact that they no longer have any real momentum: their strange but practical family is in a rut.  Columbus and Wichita are on the precarious edge of domestic bliss, a much older Little Rock is bemoaning the lack of a personal life and Tallahassee has his eyes on the open road.

But when the sisters head out on their own, it leads to disaster with Little Rock enjoying the company of a peacenik hippie named Berkeley and everyone knows that in a post-apocalyptic wasteland, flowers and dreams won’t work as well as a machine-gun.  So the rest of her ‘family’ set out to save her, but with the evolution of faster, harder-to-kill zombies and other survivors crossing their path, will our ‘heroes’ ever make it to Graceland, Babylon or even survival?

Zombieland: Double Tap  is a glorious mess – a  manic and silly outing to be sure, but barely held together by scattershot in-jokes, slapstick and a hopeful familiarity with the cult original. While that original was hardly Shakespeare itself, it was a  fun pastiche of the whole zombie genre and perfectly timed at the start of a resurgence for the circulatory-challenged. However this long-delayed follow-up comes at the tail-end of the same and while it throws itself back into proceedings with gusto, blood, sweat and tears, it demonstrably brings nothing new to the banquet, not even – and this is unforgivable – a solitary mention of the previously iconic Twinkies.

The original didn’t have brains, but it had ‘smarts’ when it came to timing and delivery and, most importantly, some real heart – taking the staples of the genre and twisting them around characters we’d end up rooting for even while we rolled our eyes at their hi-jinks and prat-falls. On the other hand, Double Tap comes across as a set of sketches and set-pieces loosely stitched together with string and sinew but with no real rhyme or reason to their delivery. It’s a reunion with no real imperative behind it. The cast are ten years older but the characters don’t have anywhere near that growth (except with Abigail Breslin’s Little Rock for obvious reasons) – it’s as if we picked things up a couple of years later after a particularly long and bloody continuous Spring Break. An early sequence, rich with promise, sees the gang ensconsed at the past-its-prime White House but a set-up ripe for satire is largely ignored with a filibuster of many missed opportunities (perhaps in part to the fact that truth is stranger than fiction and the most contemporary digs are impossible given that the zombie apocalypse of the Noughties would have erased a decade worth of our-history shenanigans).

The original cast have an easy repartee and while none of it breaks new ground, they all slide comfortably back into character and their snark is reliably fun – though Breslin’s Little Rock is sidelined for most of the piece. Several new characters are introduced but are so sketched-in that they barely rate as ‘supporting players’. Luke Wilson as ‘Albuquerque’ and Thomas Middleditch as ‘Flagstaff’ are good as the one-joke mirror-images of Harrelson’s Tallahassee and Eisenberg’s Columbus but are never really explored beyond that set-up and don’t stick around as long as you’d expect from the trailer.  Rosario Dawson’s ‘Nevada’ is all attitude and sex appeal but little else and while Zoey Deutch’s ditzy Madison ends up being more endearing than you initially expect, it’s largely as she’s the least cynical character, untroubled by deep thoughts or malicious intent.

There’s a fight-sequence in a Graceland hotel that is either a triumph of editing or choreography and a climax involving a genuinely tense moment when it feels like the ‘end’ for our heroes, but otherwise proceedings are largely divided between snark and ever-unlikely if spectacular ‘kills’. It’s as if there’s been a pressure for Double Tap to consistently one-up its predecessor and in the attempt,  it abandons all internal senses of logic, where the heightened reality becomes completely and utterly abstract for the sake of a punchline. Even some of the devices from the first feel out of place now. The uneven use of Eisenberg’s narration (acknowledging you’re watching the story play out in a cinema – something that works far better in Deadpool, also penned by co-screenplay writer Rhett Reese) keeps lifting the audience out of its investment and the international zombie-killer rankings (including an even-silly by Zombieland-standards vignette in Italy) really don’t help. The ‘Babylon’ camp itself is another prime example: the original had a fairground denouement, but here  the ambitious idea for a skyscraper location is undone by a budget-snipped rendering  that doesn’t make a lot of sense in practise and which amounts to an obvious indoor-studio-set ‘outdoor’ rooftop climax by the time we reach the undying end.

You find yourself wanting to like Double Tap more than you actually are and largely because most of the jokes are fun but were better played out in 2009’s outing. Perhaps if the sequel had come quicker or with a better through-line, it would be easier to appreciate the whole continuing guilty-pleasure of the piece. But Double-Tap has little left in its tank and while the ride is fine on a beer-and-pizza level  – and one suspects it will do amazingly well on eventual DVD release –  it’s basically running on nostalgia and vapours, no longer stylishly lampooning stereotypes but easing back its throttle and lazily relying on them.  Sadly, the best scene in the whole film comes during the credits when a familiar face makes an appearance to link the two films with a welcome flashback.

Now, if that had been the premise of the sequel instead, it might have been a different story… 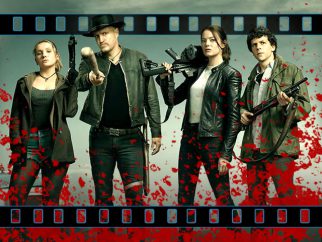