The latest 'Short Trek' gives the infamous 'tribbles' an origin story with a case of 'Edward and Missing Symptoms'...

One of the most memorable and offbeat episodes of the original Star Trek was David Gerrold’s The Trouble with Tribbles in which the Enterprise of Kirk’s era encountered seemingly harmless balls of fluff that turned out to breed at such an exponential rate that they soon became a threat to the ship. The concept was revisited in Deep Space Nine‘s time-travelling homage Trials and Tribbilations and there was mention of the Kilingons themselves going to war with the creatures. But now we get a glimpse at an earlier part of the Tribble saga and find out that perhaps not everything we presumed was true.

It turns out that far from being the ‘prodigious reproducer’ we were led to believe, the original tribbles might have been very slow in that department and prone to dying quickly. However when scientist Edward Larkin (H. Jon Benjamin) – onboard the scientific base/research ship ‘The Cabot‘ – collects one to study, he quickly grows bored of it and decides that its only saving grace would be as a delicious food source if he could just find ways to make more.  After all, he notes, the crew of The Cabot are looking in the way to stop a famine in the planet below – so why not? His new captain (Rosa Salazar as Lynne Lucero, newly promoted from the Enterprise where she served as science officer)  – and indeed most of his fellow scientists aboard the Cabot  – find Edward’s rather callous and amoral notions at the very least ‘dumb’, definitely creepy and at worst dangerous. But feeling shunned by his peers, he decides to go ahead and against orders he genetically modifies the tribbles… leading to an alarming production rate that quickly escalates out of control.

And that, in a nutshell is almost the entire plot of one of the shortest Short Treks an origin-story of sorts that speeds along with the pace of a highlights reel or a proof-of-concept pitch and perhaps for that reason alone never quite delivers the iconic punchline it’s looking for.  It’s an ode to workplace dysfunction, to the hubris of  those who consider themselves superior to others and the consequences of not acting in the best interests of everyone.  That’s not to say it’s not fun, but the humorous tone, albeit with some darker touches, does feel like a rushed love-letter to a classic, one that gushes its devotion and in doing so misses opportunities.

We’re introduced to Larkin as a bumbling, awkward scientist whom we don’t know whether to pity or despise at first. The problem with the mini-episode’s brevity is that the story-telling shorthand and speed of Larkin’s betrayals underlines Lucero/Salazar’s rather obvious question about how a man such as he could ever made it this far in his career with such attitude, disrespect and lack of professionalism. With more time Benjamin, who does as well as he can in the moment, might well have essayed a more complex and nuanced character, but instead it’s just a convenient bullet-list of character-flaws. Salazar as Lucero is more likeable but her newly-promoted officer seems in way over her head and far from the kind of person who would make Captain so early in her career nor one who learns from the incident (her dismissal of Larkin is played for laughs but undercuts hr authority). As for the rest of the Cabot’s team, they’re reduced to screen-filler and awkward side-glances, another casualty of the running-time.

There’s another appearance by Anson Mount as Pike, which you can either take as CBS capitalising on the actor/character’s new-found popularity at the expense of telling Discovery-related concepts or just the powers-that-be not wanting to put too many new dots between Discovery‘s centuries-jumping journey until its return to screens (which could surely have been – and may still yet be – circumvented by having stories about them set earlier). Mount has amazing screen charisma, but it’s several minutes that welcome, but aren’t really necessary except as placeholding.

Of course, if you’re particularly eagle-eyed, you might notice that Larkin is later seen wearing an insignia that looks suspiciously like the Section 31 ID, the morally dubious black-ops department of Star Fleet… which might make you think that Edward’s askew personality and actions might have been something more nefarious… after all, the legend notes that those pesky tribbles did manage to get in Klingon space and cause havoc.

Ultimately, though the scenery is lovely, the trouble with The Trouble with Edward is that it’s a light diversion rather than a Short Trek…

Short Treks are available on CBS All Access in the US. There are no official release details for international territories as yet… 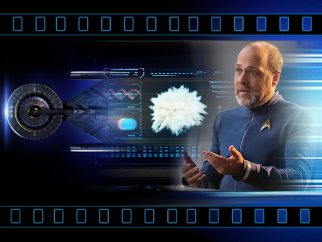