Harley Quinn continues to be a manic part of the DC movie universe - as proven by the latest 'Birds of Prey' trailer... 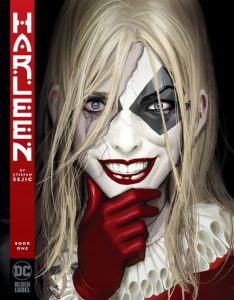 While the Joker is almost certain to be the topic of pop-culture discussion in the next week or so (as the more cerebral and controversial film of the same name – directed by Todd Phillips and starring Joaquin Phoenix – opens internationally), for the moment it’s his erstwhile comic partner-in-crime ‘b.o.p.-ping’ at the headlines as Harley Quinn grabs some of the limelight with a trailer for the forthcoming DC/Warners film Birds of  Prey (And the Fantabulous Emancipation of One Miss Harley Quinn).

Harley has got a lot of attention in comics form and through her appearance in the Suicide Squad movie, Margot Robbie’s first turn as the character. It’s not being without controversy with many noting the fact that the character of Harleen Quinzel is essentially a psychologically-damaged doctor used and abused by the Joker and one whose ‘damaged-but-sexy-bad-girl’ persona essentially ticks more male-fantasy bullet-points than it does female-empowerment motifs. However Robbie has certainly fully invested herself in making the role her own and DC comics have emphasised the character in her own right, away from the Clown Prince of Crime (In the comics she’s now portrayed more as an anti-hero and is in a healthier relationship – of sorts – with another ambiguously motivated Poison Ivy). There’s certainly no denying she’s a versatile creation that can be played for drama, pathos and comic-relief depending on the circumstances.

Today’s trailer gives an idea of what to expect from the Birds of Prey movie that was directed by Cathy Yan and will be released next month. It sees no trace of the Joker (apart from a few mentions of their break-up) but plenty of ladies to keep her company… including Black Canary (Jurnee Smollett-Bell), Huntress (Mary Elizabeth Winstead), and Renee Montoya (Rosie Perez)… and trying to survive the machiantions of Gotham crime-lord Black Mask (Ewan McGregor).