As 'Spider-man: Far from Home' hits DVD, can it be judged away from the Marvel/SONY hiccup that followed?

The Avengers managed to restore  those snuffed out of existence by Thanos during the Infinity War, but there’s now a sizeable slice of humanity that have re-entered the world  that’s gone on for four years without them. Peter Parker and several of his key friends all suffered that fate, but life goes on and they, at least, have each other. Life is returning to as normal as it ever gets and Peter and his fellow students are off on a trip to Europe – giving Peter some time away from superhero adventures and the fallout from losing his mentor, Tony Stark.

But things rarely work out that easily and it appears that Nick Fury has both a surprise and a mission for the young Parker. The surprise is a gift from the late Stark and the mission is… something that peter wants to avoid, especially as it cuts into his plans to relax and get closer to MJ.  However, when an ‘Elemental’ monster attacks Venice during their visit, Peter finds himself once again caught up in battle, even though the major heroics are performed by a new Shield recruit, Quentin Beck (and whom the public label ‘Mysterio’). Beck tells Peter he comes from another Earth in the multiverse, one that was largely destroyed by the Elementals and that he’s determined to stop the same happening here.

Peter wonders if Beck is far more deserving of being a successor to Tony Stark’s legacy than he is, but as Parker seeks to balance his personal life and heroic duties, there are some agendas at work he knows nothing about..

It’s almost impossible to judge Spider-man: Far from Home now without looking at it through the looking-glass of the Marvel Studios / SONY disagreement that unexpectedly followed (and which we’ve covered at length). Right now the various interconnected threads of the Marvel Cinematic Universe seem back on track and the on the theatrical release of Far from Home everything was hunky-dory…. but for a while in the interim, things got… interesting.

But what of Far from Home on its own merits? There’s a perfectly reasonable argument to be made that Far from Home is  silly, contrived and plot-hole-ridden, over-dependent on its set-pieces, full of numerous prat-falls and littered with some lightweight snark throughout – but even after all of that, there’s also no denying that it’s also good, decent – if somewhat undemanding – unapologetic fun.

True, it is lighter in tone and frothier, clearly aimed at a younger audience than recent entries. But it is – after all – the footnote to ‘Phase 3’ of the Marvel Cinematic Universe and has the unenviable task of coming hot on the heels of  Avengers: Endgame: not just the bigger, more somber and more eventful entry but very likely to imminently become the most profitable film in the history of cinema, not to mention the other arachnid entry, the Oscar-winning animated Into the Spiderverse). Perhaps wisely, then, this is a Spider-man entry that pays dutiful lip-service to the always central idea of power and responsibility (with Peter trying to live up to Tony Stark’s posthumous expectations) but always makes sure the ‘heartfelt message’ doesn’t get in the way of a story that’s more  ‘European Vacation’ than emotive vocation.

Holland is essaying a younger Peter Parker than recent peers (and even the modern Marvel comics) and he does so with an engagingly awkward style that fits the teenage remit. Wisely he lets the CGI, fairly seemless even when totally defying the laws of physics, take care of the action heroics and concentrates on giving us a hapless hero looking for a new direction. The power, responsibility and box-office success largely rests on his performance and though Holland is an actor in his early 20s, there’s no moment when he doesn’t perfectly personify those awkward teenage years where even non-superheroes have to decide what’s important to them.

Jake Gyllenhaal thoroughly enjoys the theatrical side of Quentin Beck aka Mysterio, initially as a visually flamboyant and assured hero whom Peter sees as a more worthy successor to the Stark mantle than himself. But given that the character is a well-known member of the webslinger’s rogues gallery in the comics, the revelation that there may be more to Beck’s ‘heroic’ actions than it first seems, somewhat robs of any ‘shock’ twist. Samuel L. Jackson reprises Nick Fury, a man who doesn’t take kindly to being ‘ghosted’ – though the most loyal Marvel fans might spend some time wondering how the resourceful Fury is so easily duped on several occasions and seemingly has the full resources of SHIELD at his disposal when he’s been a no-show for so long in the ABC series. (Technically an answer comes late in the day). Marisa Tomei continues to give us the sexiest Aunt May in history and the potential romance with Jon Favreau’s ever-reliable Happy Hogan works better than expected, even if it’s largely a continuing joke to make Peter feel uncomfortable.

Any close scrutiny of the story dynamics is probably not too advisable.  So much emphasis is put on Peter wondering if he can be the ‘next Iron Man’ that it’s as if the film forgets that there are almost hundreds of other ‘bigger’ heroes now back in circulation after the ‘Blip/Snap’ who likely have far better credentials and claim to the throne (but it name-checks a few only a specific few as being ‘unavailable’ for a variety of convenient reasons). The CGI, though excellent as noted (particularly in some of the Mysterio illusion scenes such as the ‘house of mirrors’) drives the film but director Jon Watts relies on it too much when it’s obvious that the film’s strengths are in its young ensemble. The Infinity wardrobe of interchangeable Spider-suits are genuinely nifty and visually fun, but giving the web-slinger an ever-growing ever-ready arsenal rather than angst almost goes against the grain of the young hero’s signature style.

It is interesting  – and a touch bizarre – that two major scenes are thrown into the end-credits with an almost ill-fitting, casual tone that belies their massive impact on anything that will follow. Without specific spoilers, the first spins out in a wholly unlikely way from the film’s final hero-villain confrontation and though it also has a welcome era-spanning cameo, it essentially changes the entire status-quo for any third modern Spider-man film (and given that, would surely have fared much better as a dramatic closing scene that audiences wouldn’t leave before seeing). The second is also potentially significant, if lighter in tone, but it does reframe at least one character’s total motivation throughout… and again, it’s strange that such a moment would be considered ‘optional’ to see considering the ramifications.

Even despite its emphasis on ‘feelz’ rather than lack of real emotional wallop (or perhaps because of that), Spider-man: Far from Home proved to be a crowd-pleaser on its cinematic release and will undoubtedly hit just as big on DVD, even as an almost old-school, high school romp and assured summer tentpole. It does what it says on the tin of web-fluid and if it doesn’t push a single boundary other than the FX budget, it struts with a self-confidence that’s almost earned. 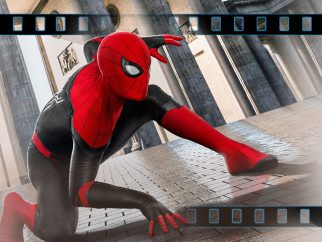 Wanted: A Kick-Ass trailer for a King’s Man…