Emma Larsimon (Victorie Du Bois,) is a seemingly petulant and self-absorbed writer of horror fiction; something of an aloof international celebrity with her ongoing saga that has her hero, Lizzie Larck,  facing off against an otherworldy witch named Marianne. In the books, her evil creation can apparently jump from body to body… but though an expert at spinning lies, she must always respond with the truth when asked her name.  However Emma has recently ended the saga with both Lizzie and Marianne seemingly consumed by their mystical war… but it’s not only her fans who are feeling frustrated with the lack of real closure.

Emma is visited at a signing by childhood friend Caroline who says her mother is obsessed with – and possibly possessed by – the book and demands Emma must return to her childhood home of Eldon… but when Emma refuses, Caroline commits suicide in front of her.

Inevitably drawn back to the small French coastal town of her youth, some uncomfortable truths begin to surface. Why did Emma flee the town and alienate her family, what has happened to the people who were her closest friends and why are opposing forces gathering to ensure she continues writing… or to make sure she does not?  Emma survived the nightmares that originally inspired her work and has seemingly held her traumas at bay, but can she survive the return of those nightmares and the damage that follows… and just how many people will she piss off in the process?

There’s crazy-ass horror and then there’s French crazy-ass  horror and there’s little doubt that Marianne is a prime example of the latter category, filed under ‘scary-as-hell, but totally le batshit whackadoodle’. The combination of baseline, under-the-skin horror colliding with a subverted suburban normality feels as if we’re watching David Lynch taking a stab Broadchurch or perhaps Stephen King visiting Doc Martin territory. There’s elements of other classics in the mix: a touch of updated Hammer blows; certainly some IT (the idea of a writer revisiting supernatural childhood trauma), Death Note (the written words having a symbiotic effect on reality), A Nightmare on Elm Street (with its illusions and generational vengeance motif), Hereditary‘s crawling unease, the extreme characters of Twin Peaks and, of course, The Exorcist itself (for obvious reasons).

The first episode, which I saw recommended by thriller writer Sarah Pinborough, is more than fine – unsettling and mysterious, setting out some of its conceits and main characters and daring you to come back for more, an offer for which many will likely sign-up. It’s all very promising in a befuddled kind of way. However, the wider result is perhaps more a case of style over content. While last year’s superb The Haunting of Hill House felt like the complete package of intelligent story-telling and chilling developments, fitting together like the perfect jigsaw, Marianne‘s long-game turns out to be less well blueprinted and it results in a haphazard grand-guignol flourishes rather than intricate grand-planning. The main thrust of the mini-series rests on the ability to brush up the traditional tropes and cliches and to create quality tension with classic visuals and audio: a door creaks open by itself, a shadow moves, something suddenly pounces from off-camera, people self-injure or worse. There’s a masterclass to be had in the conveyor belt of familiar but effective jump-scares, but the larger pacing and stitching together of those elements proves a little less successful – a gothic counterpane of those ideas and sleights of skeletal hand, drumming up more of those dread and scares than actual story logic. It could be that the translation/dubbing of the original French (still a better choice than subtitles when you need to keep your eyes on the action) makes some of the dialogue a little stilted and inorganic or it could be a cultural distinction, but a British or American audience will likely go between gripping the arm of the chair with white knuckles and scratching their heads as the episodes play out.

The eight episode run would normally feel about right for such an unfolding, multi-layered genre story, but even with several shorter chapters in the middle running to barely thirty minutes apiece, there’s a feeling that there’s quite a lot of self-indulgence at work, the story swinging between choice cinematic ideas and sometimes meandering off by itself to focus on supporting characters that it then drops. For example Lucie Boujenah as Emma’s bookish assistant Camile seems to be a pivotal character before suddenly being confined off-camera for much of the series’ second half. Equally some of Emma’s grown-up teenage-entourage feel little more than archetypes, set up as plot-devices or cannon-fodder or pawns with which to taunt Emma.  Characters such as the overtly-quirky Alban Lenoir’s Inspecteur Raunan and Patrick d’Assumçao’s Father Pere Xavier, rapidly become little more than mere caricatures.

Du Bois strikes the right note as a tomboyish rebel Emma, a young woman who has grown comfortable with making people uncomfortable. Though the reasons are explained as we progress, Emma is hardly the most sympathetic character – disparaging of those around her and flippant to even her most loyal supporters –  she has a long-established if eventually faux arrogance that begins to crumble as we understand why she keeps people at arm’s length. Du Bois plays the hard-edges and vulnerability well and the fact the character remains even remotely sympathetic is largely down to her performance.

However, one of the show’s secret weapons is Mireille Herbstmeyer, who plays the delightfully off-her-rocker Mrs. Daugeron, the initial  personification of the Marianne entity and eats the scenery (among other delicacies) in every minute she’s on screen. Her weathered face and singular piercing gaze play to every barometer of the traditional witch, but with her grim gait and sadistic behaviour, it  feels like you’re watching a tainted version of the apple-bearing witch in Disney‘s animated Sleeping Beauty made flesh.

Released on Friday 13th (well played, Netflix) with less fanfare than expected, Marianne is worthy of recommendation, another example of recent horror offerings that still have something interesting to offer. But one suspects it may be enjoyed in full more by veteran connoisseurs of the genre who recognise its myriad inspirations and film-school sophmores looking at technique rather than casual viewers who could quickly tire of the singular gallic eccentricities after a couple of visits. 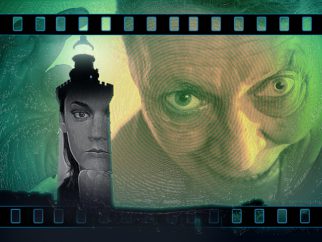