Amazon's alt-history magic mystery tour builds a world of magic - but suffers a little in its early pacing...

The world is not a safe place – whether you be human or a creature of magic – and survival can mean the hardest of decisions and the weightiest of compromises.  The humans of the ‘Burgue’ enlisted the help of the ‘fae’ to protect their homeland from the invaders known as The Pact. Losses were significant and though they succeeded in holding back their enemies from the deepest parts of the homeland, the alliance has often seen fae, pucks, trolls and morrocks treated as an unwanted second-class, reduced to dirty jobs and questionable, even illegal activities just to get by. Places like the Burgue have districts like Carnival Row where the law is rarely fair for all.

Vignette Stonemoss (Cara Delevingne) spends her days helping fae refugees escape to places like the Burgue… but is forced to flee herself as The Pact attacks again. When her ship sinks she finds her only recourse is to work off the cost of her passage for the ship’s owners in the Burgue. She hopes to find some familiar faces but is shocked to find one in particular.

Rycroft ‘Philo’ Philostrate (Orlando Bloom) is a police inspector in the Burgue who fell in love with Vignette back while he was a soldier but faked his own death during a retreat, knowing it was the only way to save her from the onslaught. Surrounded by complicity and corruption, his investigation into a series of grisly murders around Carnival Row brings he and Vignette back together. She may never forgive his deception, but in a world of dangerous, conflicting agendas and political power-plays, their connection and the deepest secrets they share may be the only way to solve the murders and those who would seek to bury the truth…

The idea of the ‘Neo-Victorian-noir’ Carnival Row was originally conceived as a film script by Pacific Rim‘s Travis Beacham (and in 2005 was on the ‘Black List’, a selection of scripts yet to go before the camera but touted as the most deserving) and was announced as going to a series format back in 2017.  Though mini-series often give ideas far more room to breathe, it’s easy to see how the feature format might have offered the concept a different and tighter feel than the latest Amazon Prime offering, rich though it is . The show’s ingredients are more than fine – with an intelligent, fully-realised and well-crafted result –  yet initially there’s a feeling they don’t consistently mix together in quite the potent formula they should and it takes some time to rectify that. It’s true that alt-history stories, always rich in possibilities, require form and foundation but in the first episode there’s arguably so much time spent on world-building and set-up that it’s done at the expense of dramatic pacing and momentum – a tilt towards a bass-line of grim guttersnipes and earthy squalor rather than a melody of gossamer-powered flight.  It’s all a case of ‘hurry-up and wait’ for the first two episodes that feels like the creators weren’t sure how many episodes they were going to get and were hedging their bets in both directions. Then the show’s third episode presses the pause button and is almost entirely a flashback backstory – again, intriguing and well-delivered – but one that halts the main story far too early in the run like a forgotten anecdote remembered before plunging us back in. It’s all things that some judicious editing and rearranging could have sorted.

Some of this comes from that long, turbulent journey to the screen. Guillermo Del Toro was involved at the very start to direct (it’s all clearly his kind of territory) but had too many film commitments, Paul McGuigan (Luke Cage) came and went in his stead and then Jon Amiel was drafted aboard. Rene Echevarria (Star Trek:Deep Space Nine) became Executive Producer.  Multiple reshoots happened (which are, all too often, a less than positive sign) but the result – according to cast and crew – is better, though that un-evenness remains.

That’s not to say the production department hasn’t wholly risen to the occasion  – far from it – nor that the VFX department hasn’t given us quality and quantity of colour-muted imagery – it most certainly has. The Czech-based sets offer an expansive backdrop, both in urban and rural environments and could give some other epic shows a run for their money. And, yes, it proves worth digging in for the long-haul –  it’s just that, early on, there’s less a sense of tangible urgency than one might expect from such a multi-layered magical murder mystery. There’s so much going on that it’s difficult to see where its priorities lie. Later episodes do draw things together in entertaining and possibly unexpected ways.

Given the talent involved and how well it must have looked on paper, one niggle is that while Carnival Row has its own niche, we’ve seen almost all those individual elements in its DNA before in one separate way or another – as well as the obvious touchstones of Grimm’s Fairy Tales and  of Game of Thrones (by which all sprawling stories of empire-building will now be judged, especially as it progresses) there’s more than a touch of Taboo, a ray of Ripper Street, an air of The Alienist, a bite of Bright and even a soupcon of Sherlock Holmes – but it as ometimes runs the risk of merely recalling those previous productions, ones that already set a bar pretty high. The grimness is echoed in the mature content. Magic tales of faeries (fae), trolls, pucks or not, this is all serious ™ stuff. There’s plenty of Fs scattered around, a few casual Cs dropped and nudity, though the latter seems less there to purely titillate than some shows.

Undeniably, the motifs of war, the fickleness of political loyalties, treatment of refugees it creates and the xenophobia within a heavily-weighed class system, resonate all too obviously with parallels in our own history and even the current climate. Some of those are obvious, some more subtle, but the show successfully creates a ghetto’d underclass fighting for rights, respects and their own culture in a world that would rather they  ‘know their place’ or even just go away after serving their purpose.

The strikingly beautiful but tomboyish Delevingne glides around on Vignette’s silken wings but is grounded by circumstance and Bloom stomps through his scenes with rarely a smile – each with a grim weight of different worlds on their shoulders. There’s real chemistry there, even if their love story seems to come in fits and starts. The supporting cast all do their roles proud with the likes of Tamzin Merchant, Alice Krige, Indira Varma, Caroline Ford and Karla Crome showing how female actors can be well represented when given the right material  and the reliable Jared Harris – occasionally looking like a buffed up regency Graham Norton – enjoying the chance to chew some scenery.

Definitely worth your investment and navigating earlier choppy waters, Carnival Row gets more right than wrong and with a second season already agreed, it will be interesting to see whether its particular kind of magic endures… 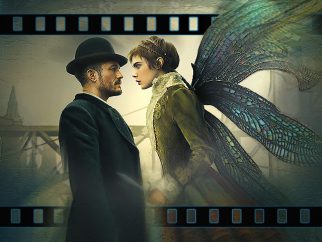 Face/Off is ON again – transplanting to modern remake…