When a child goes missing, reflecting the events of previous abductions and murder, the boy, his father and an investigating officer have to draw on old secrets and home truths to find closure...

Fifteen years ago, the town of Featherbank was shaken by a serial killer that abducted and killed five young boys over several months. The killer became known as ‘The Whisper Man’ because there had been reports of whispering at the windows of the children before they vanished. Subsequently, other quiet voices conjured warning rhymes about the very real danger to the area’s children. But, ultimately, the police investigation led to an arrest of a man called Frank Carter, and today that man is safely behind bars and the killings have faded into an almost urban legend status.

Tom Kennedy and his young son Jake have moved to Featherbank to make something of a new start after the devastating loss of Tom’s wife and Jake’s mother the previous year. Tom is struggling with the weight of steering Jake’s life back on course at a time when he’s barely hanging on himself. There’s nothing he wouldn’t do for Jake, but he’s also aware of the mistakes he’s making as he over-compensates and acts with the best of intentions.

Tom knows that both he and Jake need some space and time.  But then Jake, who seems to have found an imaginary friend, says he’s also heard strange whispering at the window… and Jake goes missing. Tom, Jake and a police detective, Pete Willis – a man haunted by aspects of his original investigation and personal failings, years before – all find themselves plunged into an all-too-real new nightmare where they might have to rely on themselves and each other to prevent another tragedy…

Perhaps it’s not wise to start a review of a thriller with the phrase ‘full disclosure’  – after all, mysteries need questions and time to breathe – but it’s only fair to say ahead of time that I have known author ‘Alex North’ for a long while and I’m familiar with his previous work as a local writer in Yorkshire, England – though The Whisper Man, of which I received a complimentary copy to read without obligation, is technically Alex’s first full-length novel.

A raft of early rave review quotes have already acclaimed The Whisper Man to be ‘the best crime novel of the decade…‘  and though such impressive claims are always subjective and dependent on particular individual opinions, there’s little doubt that this a solid read and mines that rich seam of everyday people caught up in extreme circumstances.  The procedural aspects work well, an investigation that takes twists and turns but never steps too far from the basic realities of police-work… and all infused with people who each have their own reasons for their decisions and actions, past and present. But perhaps the real strength of The Whisper Man is not in its central mystery – though that too itself is effective enough – but in the brutally honest depiction of a father and young son, each coping with very real grief in their own way and emerging from their lives being torn apart by tragedy. Anyone who has had the duty and privilege to care for an emotionally damaged child will likely find the story of the bond between Tom and his son Jake to resonate on a variety of levels – from the navigation of the mundane, daily routines to which life must eventually return… to the very real promise of doing anything to protect that young life from further pain – and that promise being tested in a very real way.

After an ominous prologue, individual chapters take on different perspectives and those they pivot around – and everything  slowly evolves to give a wider context, with some genuine surprises. We get to know some of the feelings of victims and perpetrator, but it’s a gradual process, peeling back their motivations and survival skills. That means it’s not always a comfortable read, in fact it can be disturbing and heart-wrenching, but it remains at all times a deeply compelling mix of thriller, mystery and study of grief…

Those familiar with Yorkshire –  and, in particular, areas west of central Leeds – may find some degree of familiarity in the fictional locations and certainly they are described so well, that I found myself transported to places both familiar-by-other-names and imaginary. In that sense, the story is remarkably grounded, carefully and expertly placed in a ‘real’ world complete with everyday details. There’s just a little of the supernatural at work, fluttering like a moth at its edges, but it’s a lighter and subtle element in a dark tale and though it permeates the story on several levels, it’s not as earthily overt or direct as say the work of the more grimly ethereal John Connolly. Indeed, by the time you close the cover, you may to choose to interpret such elements as you see fit.

The rights to adapt The Whisper Man have already been snapped up by the development company owned by the Russo Brothers (responsible for the last two Avengers movies for Marvel) and though such a process can be agonisingly slow, it will be very interesting to see how the emotive, nuanced and quite deeply affecting book could translate to a screen adaptation.

The Whisper Man by Alex North was published in the UK on 13th June by Penguin / Michael Joseph. 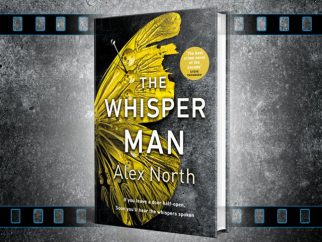 Ray Winstone is one of Black Widow’s merry men…