A subversive and fun but far more conventional take on fan-worship and hi-tech shenanigans rounds-off the latest 'Black Mirror' season...

Rachel is at that awkward age where she’s deciding whether fitting in to school-life and having friends is the most or least important to her. She tries not to care what others think but is still tempted to take paper in the talent show to prove something to herself. Still, she can always rely on pop superstar Ashley O to cheer her up, whether it’s watching videos of her on her computer or plastering her wall with posters. And when the superstar announces that there’s going to be a ‘Ashley 2’ authorised desk-top doll, imbued with a suitable array of advice, positive message and interactive interface based on her own mindscan…. well, Rachel knows what she wants for her birthday!

Her entrepreneur father and her older sister don’t really understand her obsession with everything Ashley but tolerate it and club together to purchase one of the new toys.

But meanwhile, the real Ashley O is having struggles of her own – hitting a roadblock in getting motivated for another one-size-fits-all album but having to smile sweetly for the camera. And her aunt/manager hasn’t put her life on hold just to see their huge financial empire come crashing down…

Rachel, Jack and Ashley, Too is another entry that begins as one thing and transitions into something else by the time we’re done. What feels as if it’s going to be a potentially sinister story about a toy with almost AI-levels of familiarity and accompanied by slight touches of a commentary about general mass marketing tips… actually tips those scales the other way, becoming more of a simplistic, but subversive romp through the music industry with a few tech tricks. It’s a tale that doesn’t have a huge moral point to make, but enjoys itself with a sense of unapologetic anarchy that sometimes makes it feel like the Mickey Mouse Club on crack.

The story might be flatter and more pedestrian if it wasn’t for the casting. It certainly helps the ‘sell’ that Ashley O is played with a knowing touch of irony by Miley Cyrus, a performer already familiar with the music industry’s foibles, demands and sometimes uneasy rites of passage. It puts her in a prime position to add an extra dimension to proceedings and give even the more extreme elements more validity.  One suspects the semi-fictional notion of the story also gives her a nice opportunity to look back and mix both the safe-for-work sentimentality of her early days with the darker, rebellious attitude of later years and now swear like a trooper with full permission.

Angourie Rice (soon to be seen in Spider-man: Far from Home) starts out fine as the nervous, awkward ‘geek’ Rachel, who’s more at home with her worship of ingenue pop songstress Ashley O than in the other kids at school, but still aches to be appreciated.  There’s far more for Madison Davenport (recently seen in Sharp Objects and in the From Dusk ’til Dawn tv series) , playing her older and grungy sister Jack and a nice supporting comedic role for Marc Menchaca (Ozark, the Sinner, Manifest) as their father and House of Cards and The Sinner‘s Susan Pourfar deliciously eats the scenery as the manipulative song manager.

The Ashley 2 ‘doll’ is the other star, a great physical design – coming across as a mixture of an Alexa unit and a Funko toy, with moments of prat-fall humour and more suspicious pro-active interactions. It’s never too life-like to let us forget robotic nature and yet reactive-enough that one could imagine  – even before its safety-lock is undone – as being only an algorithm away from being a potential distant cousin of Chucky.

Yes, the story gets a little muddled as it enters a third act. The seemingly central idea of Rice’s Rachel getting a vanilla confidence boost (good or not) from Ashley 2 gets abruptly abandoned (with the story suddenly finding Davenport’s Jack far more pro-active). The AI unit itself may have been a catalyst for events throughout but is little more than a prop when we get to the climax and the real Ashley’s resolution is only a little more shockingly rebellious than it would be if found on the Disney Channel. It almost feels like Brooker got a little bored with the story he was telling and instead of  giving any great insight simply decided to have fun – and in that regard, the result is fine: it is fun, silly and perhaps a tweak of the funny bone that suggests that one can be cynical about modern music without being overtly serious.

Looking back at this shorter-than-usual season of Black Mirror, it may be true to say that none of the entries are quite the standouts one can point to afrom past seasons, but presented in quick succession they collectively speak well to the intent and sheer diversity of the whole Black Mirror reflective remit.  And, nearly a decade on from the start of this boundary-pushing experiment, that’s still quite an achievement for Brooker and the show. 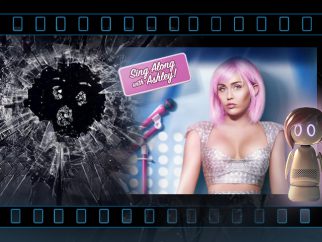