Writer Joe Hill has proven to deserve as many accolades as his father, Stephen King. But does the new AMC series based on 'NOS4A2' live up to expectations..?

Victoria ‘Vic’ McQueen (Ashleigh Cummings) dreams of escaping her small Massachusetts town and heading off to art college – away from her bickering parents and the area that stifles her talents.  She divides her time between school and helping her mother clean houses, but though her mother believes Vic shouldn’t aim too high, she wants to fly. The only time she feels free is when she’s drawing or riding her motorcycle and one day, trying to escape the dramas within her home, she finds a long, covered bridge that she’s never even noticed before. Asking her father about it later, he insists the only one of its kind was demolished years before.

Elsewhere, a young boy, Daniel Moore (Asher Miles Fallica), is taken from his home, tempted outside by Christmas presents piled inside an exquisite old Wraith car, but driven away while his parents are murdered. The car’s driver is Charlie Manx (Zachary Quinto) who insists they are now on their way to ‘Christmasland’ but leaves carnage in his wake.

As Vic begins to realise that the bridge she sees can take her anywhere she needs to find lost things and – far away in Iowa – a young girl Maggie (Jakhara Smith) with a different, but no less effective gift, starts her own investigation into Daniel’s fate…the two women find themselves not only the only hope Daniel may have of survival, but also the vanguard against an ancient, immortal evil…

The appeal and, ultimately, the success of NOS4A2, will largely depend on what you expect.  Joe Hill is, as many know, the son of Stephen King and the texture of his tales undeniably resonates with that connection and style, though generally stands up to quality-control in its own right. There’s the familiar and familial knowing sense of middle-America having all the strengths and weaknesses to attract and confront greater evils and the foibles of the characters who form the fault-lines in its surface tensions. Your judgement on whether this adaptation is naughty or nice, will depend on how you accept those basic elements – offered with a degree of panache and prestige but also with formula. Some will find the considerable amount of screen time it spends on social dynamics and dysfunctional relationships as pragmatic ballast to the main, more spooky elements and events, others will see it essential to make us care.  And before anyone claims that comparing Hill and King is unfair, the counter-argument is that this is already a story taking place somewhere in the outlying areas of noted realms: for instance a map that Charlie Manx consults which clearly shows pinpoints such as ‘Pennywise Circus’ as supernaturally-tuned landmarks. You can’t have your Christmas cake and eat it.

But if you’re feeling seasonally-shifted, NOS4A2 plays well to its accepted strengths – a spunky young incisive heroine versus a spittled, old, jagged-incisored menace is always good dramatic fodder, though anyone expecting the vanity-plate title to introduce genuine vampires will have to make do with the idea of sucking someone life force rather than any actual biting.

Ashleigh Cummings, probably most familiar to audiences for her key role in the acclaimed Australian feature Tomorrow, When the War Began, continues to have a commanding screen presence and here comes across as a mix of Jennifer Grey’s yearning misfit Baby in Dirty Dancing and Ally Sheedy’s equally ill-at-ease, more gothic Allison Reynolds in The Breakfast Club. She’s bored and frustrated, a small-town girl within touching distance of the wealthier young high-flyers who have realistic plans to head off to prestigious colleges, yet aware that despite her own dreams she may not get the opportunities and doesn’t quite believe those who encourage her, suspect (sometimes rightly) of their priorities.

Zachary Quinto (Star Trek, Heroes, American Horror Story etc.) is initially buried under several inches of prosthetics as the wisened driver of the mysterious car of the title, but emerges from such with a sinister glee – in turns with a subtle glint in his eyes and in other scenes positively chewing the scenery with the rotted teeth of an ancient shark. He’s an excellent, if obvious, choice for Charlie Manx, with the right mixture of charm and malice, almost like a dark and twisted Willy Wonka. Though largely used for exposition and explanation of some of the plot conceit’s Jakhara Smith, as Maggie Leigh, also manages to elevate her sassy psychic from a template agitant to a genuine mover-and-shaker eager to use her skills (and a bigger-on-the-inside Scrabble bag of answers) to find out the fate of the young boy she teaches to read and to make sure Vic is set on the right course of action.

But there’s also a strong supporting cast. Ebon Moss-Bachrach (The Punisher) and Virginia Kull (The Looming Tower) play the dysfunctional parents of Vic – each wanting the best for her in their own ways, but with an inability to look beyond their own personal needs and live together peacefully – with a brutal and painful honesty. Olafur Darri Olafsson brings out the almost-sweet vulnerability of the challenged, but eager-to-please Bing Partridge and you quickly become invested.

There’s a question over whether AMC‘s ten-part series is the right format for the story. It’s fair to note that adaptations of Stephen King stories and concepts have more than once floundered over their basic structures, expanding the material but ending up diluting the pace and impact. The limited series apparently only covers around a third of the book (and none of Vic as an older adult), so there’s some additional material in there to fill the time, though ironically making the story less sprawling and condensing the timeline from the source material might actually do it some favours. However, on the strength of the episodes seen by us to date, there’s certainly a degree of style in the adaptation of Hill’s work that is enhanced by the directing skills and choices of Kari Skogland (whose previous work includes The Handmaid’s Tale, Penny Dreadful, Condor,  The Walking Dead, The Punisher and the upcoming Falcon & Winter Soldier). It’s slow-burn, to be sure, but at least there’s a growing sense of disquiet and urgency amid that slower pace as the momentum begins and we move past establishing the main players, into the parts they’ll have to play.

NOS4A2 was always a nifty gimmick of a title (pronounce it slowly if you still don’t get it), but as a limited series, its success will largely rest on the quality of the sum of  all its parts, not just on its early promise. We think it largely succeeds in that regard – but, like Christmas, unless you’re an AMC premium subscriber, you’ll have to wait a while to see whether you’re rewarded and whether you’ve been naughty or nice… 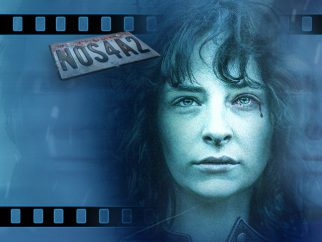