Game Over: Embers, ashes and epilogues…

'Game of Thrones' bowed out Sunday night with many in the potential dragonfiring line - but how many got their happy, fairytale ending? ***SPOILERS***

There’s one – and probably only one – absolute truth when it comes to writing for television: that you can’t please everyone, even most of the time. The more passionate the followers of your show, the more likely they’ll passionately disagree with some elements and production decisions and, ultimately with each other. And when it comes to bowing out and last-hurrahs, those shows lucky enough to decide for themselves when they leave the stage (rather than suffering sudden cancellations) have an even harder mission to fulfil. The better the years of prologue, the more difficult the moment of epilogue. To kill or not to kill, to tie-up or to leave room for more, to specifically answer a central mystery or leave it to the audience to decide. Depending on your views, there are a multitude of shows that are remembered for their classic fade-outs and sign-offs, but also an infamous rogues’ gallery of those that stumbled at the line and left a sour taste of thwarted expectations.

Game of Thrones, like the chaos and bloody feuds that were its signature from its first episode onwards, was never going to have a meek, one-size-fits-all ending. Despite honourable knights, vast kingdoms and noble houses, dark magicks and fiery dragons… ‘and they all lived happily ever after‘ was really never a viable option.  That the final run of the signature HBO show has brought moments of applause and a audible gnashing of teeth (depending on your allegiances) is no surprise – though a petition to completely rework the entire last season astonishingly reaching a million signatures even before the final bells) probably speaks more to naivety about the practical nature of the business  and an ill-set sense of over-entitlement than any truly overwhelming degree of dissatisfaction.

That being said, the final run, most agree, has been a triumph of budget and spectacle rather than truly satisfying plotting. It was not so much the quality in the writing dropping  – the dialogue still sparked with snark and duplicity, the fights were as well-choreographed as ever –  as much as the pacing of such. Once the show outgrew George R. R. Martin’s incomplete source material, the seams started to show and the intricate, philosophical and methodical, if meandering, plotting gave way to banter and set-piece punctuated momentum… a still -ratings-grabbing sword-filled story-arc that often felt more and more like a bullet-point checklist. Moments in the battle of Winterfell and the slaughter at King’s Landing set new benchmarks for the sheer visual ambition of television drama, but with such a massive ensemble of beloved, infamous characters the methods by which they met their fate, rather than the fact of their actual demise, often seemed somewhat arbitrary and underwhelming (the blah demise of  Lean Headey’s monstrous Cersei in last week’s penultimate episode perhaps being the biggest ‘Wait, was that it?‘ mis-step after seasons of build-up).

Viewers went in to the feature-length finale on Sunday night with King’s Landing still smouldering and arguably the Great Pale Hope, Daenerys Targaryen (Emilia Clarke) having quickly descended from a would-be warrior queen to a conquerer whom many were seeing as Maleficent than magnificent. The more measured Jon Snow (Kit Harington) technically had a stronger claim to the Iron Throne, but not necessarily the stronger hand – and besides, he’d already given his knee (and other parts of him) to Auntie ‘Dany’. Strategist and pragmatist Tyrion (Peter Dinklage) had seen his dreams of a relatively peaceful shift of power (with deaths limited to triple figures rather than hundreds of thousands) needlessly smited and was clearly wondering if he’d backed the right dragon. Meanwhile Arya (Maisie Williams) was riding on with revenge in mind and sister Sansa (Sophie Turner) looked at the North muttering ‘I told you so!‘ and busily tried to purchase tickets for Dark Phoenix‘s opening weekend).

So what of this final outing?  In many ways it symbolised all of the above. The fantastic, frankly stunning visuals were once again the cornerstone. The opening credits continue to be one of the most effective and intricate in television history, but episode-wise the sfx and production designs turned away from epic battles to iconic symbols: the ash fell on King’s Landing as if the winter was still coming but deliberately felt every tragic inch like a medieval Hiroshima; Daenerys held sway over her victorious forces in a way that made Cersei look like an amateur and with a sequence that looked as if it had been designed by Nazi propagandist Leni Riefenstahl channeling the darkest moments of Walt Disney’s Sleeping Beauty – especially as Drogon landed, wingspread behind her. Even smaller moments like Drogon emerging from his ‘winter’ covering in the courtyard had a quiet majesty.

Once again, the episode felt like an afterthought writ large, rushing to take care of proceedings but mixing and matching them without as much thought as one might have expected. Yes, Jon confronting Dany, the woman he loves but whose actions he cannot condone, and at long, long last being pro-active has moments of brief intimate power, but when he kills her  – so early in the episode that one almost expects some sort of sleight of hand, but no… – she goes out with a quiet whimper, an icon of winter majesty brought low. Perhaps showrunners DB Weiss and David Benioff (soon off to pastures new in a galaxy far, far away) felt they needed to make that exact point… that icons, royalty and power-mongers are no better than the rest of us, they just have an eye for the optics and timing but can die just as easily as anyone (unless they are Jon Snow).   Drogon lands and takes aim and really there’s no way that Jon can survive a fiery death, but bafflingly it never comes… instead Dany’s winged steed simply melts the Iron Throne and carries his mistress off into the clouds.  Really, the only explanation being that the mighty beast is the wisest creature in the land or maybe Bran is controlling him.

After the somewhat anticlimactic end to all that, the episode makes an uneasy, inelegant cut and mini time-jump of a few weeks that really hand-waves away the immediate consequences of the regicide which would surely have seen Jon killed anyway. But no, he’s imprisoned, alongside Tyrion and the relevant lord and ladies have gathered to see what should happen next. Essentially we’ve jumped from Mein Kampfires to The Westeros Wing. Greyworm brings Tyrion to the gathering, but not Jon and much discussion is had about who should rule – with various second-string candidates being dismissed and various A-Listers wise enough to know they don’t want it.  Ultimately it goes to Bran, a character whom it’s hard to get behind as in recent seasons he’s simply been a pompous, Yoda-like figure prone to pontificating and speaking in riddles and yet perhaps – as it’s even hinted at later – he’s influenced events to his advantage at others’ expense, as much as simply foreseen them.  However Sansa politely rejects the reunification that the others agree to and chooses to reign as Queen of the North, a peaceful neighbor to the Six Kingdoms.  Jon is ultimately ‘banished’ to the North where Kristofer Hiju’s Tormund awaits and shamefully doesn’t immediately ask him about Brienne.  Arya, meanwhile sets sail to discover strange new worlds and boldly goes where no-one has gone before. The primary Stark kids survive… Boromir would be proud.

There’s nothing to hate about this finale (except perhaps the far too on-the-nose titling of the in-universe book that will be written about Westeros’ recent history which Samwell Tarly calls ‘A Song of Ice and Fire‘ – looks to camera and winks) but there are moments that frustrate as Game of Thrones declares its game over… its surviving characters left with interesting lives to go on living.  There’s a distinct feeling that the season really needed to have spread its events out over several more episodes and with more pay-offs instead of barreling into its home strait and short-changing its characters as much as it did. It’s been wonderful in so many ways, so much so that the pieces which it does falls short stand out more.

Ultimately it’s a fickle, unexpectedly safe end, where no-one gets their complete happy ending, but more than you’d expect get to avoid a completely bloody one.  An ending that feels designed by committee telling the story that ends in a committee.

An average epilogue told in a truly epic way… which one supposes is better than the opposite.  However…. our watch here is done. 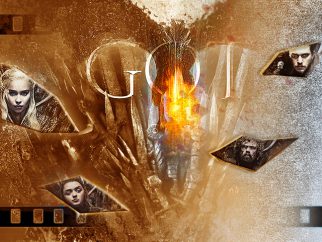