Marvel's Agents are back, but can they measure up in the shadow (and continuity-contradictions) of 'Endgame'?

Last year viewers wondered how Marvel’s Agents of SHIELD would deal with the events of their big screen cousin’s Avengers: Infinity War. After all – spoilers – the ending of that movie resulted in half of all life being extinguished and a huge chunk of our favourite heroes crumbling to dust in the wind. The tv series, which has quite artfully weaved in and out of events shown in the movies, obviously had some obstacles to navigate to continue with that. In the end, the pieces seemed to work: the show finished the season just as Infinity War erupted and  while …SHIELD was focused elsewhere (and when), the show made an oblique reference to something that appeared to be beginning in New York.  With the news that the latest, sixth season of Agents of SHIELD was not going to debut until after Avengers: Endgame came out, it seemed the show had, once again, dodged a bullet andnavigated continuity with a degree of luck and skill.

Yeah. Not so much.

Because the events of this new run take place a year after the previous season and according to Endgame – more spoilers – that was well into the ‘Decimation‘ (the technically-numerically inaccurate moniker for the Thanos finger-click) and the entire world was still suffering PTSD and dragging itself back to a new state of play until FIVE years after the event, the Avengers find a way to beat the mad Titan. Agents of SHIELD appears to abandon that conceit completely… forever scrapping the idea this is a specific if arms-length shared reality with the movies. Though a huge amount of the story is taking place in deep space, we see an everyday Earth which is largely the same as normal and not a single member of the team got dusted (statistically unlikely). The reasons given are varied. Producers Jed Whedon and Jeff Bell recently said the events of Season Six happen pre-Snap, which also seems mathematically implausible, but Ming-Na Wen (who plays May) has said they’re just ignoring it – presuming it never happened. Pragmatically, the show’s production team also say they didn’t know when the series would actually be broadcast so couldn’t work in anything that spoiled the Endgame movie’s resolution… though that seems a bit disappointing given that SHIELD‘s summer time-slot was decided a fair while ago and some accommodations to the stories could surely have been written in or added later. In fact, arguably, SHIELD would have been more important than ever in such a scenario.  It seems more likely that the SHIELD show wasn’t kept entirely in the loop and had to do their own thing without the blueprints for which Marvel are usually known.

And the problem going back in to Marvel’s Agents of SHIELD has other Endgame-related problems. While the show has had a decent SFX budget with satisfactory results it’s completely eclipsed by the ‘everything and the kitchen-sink no matter the cost’ that the film presented. The series’ space-ships are fine, the make-up is fine, the sets are fine…the acting’s okay… but no more than that. Though here’s nothing wrong with it and it tries hard enough, if you’ve seen Endgame in the last month, then it’s hard not to look at the tv screen and acknowledge that the tv budget suffers. Shared universe or not, there’s a tangible link between the two productions and the show undeniably pales in comparison.

But trying to judge it solely on its own current merits rather on the connective tissue it was launched with, the show essentially returns with two stories. Half the team (Gemma, Daisy, Piper and Davis) in deep space looking for Fitz and the rest still on Earth tracking strange portals and deciding what to call them.   The search for Fitz essentially involves looking for their missing compatriot who has been frozen to get slow-road get him to a future shown in the last season so he can save his time-hijacked friends. Unfortunately that Fitz died after being thawed out and successfully saving them. But as that future has now been nullified, Daisey, Quake etc etc rationalise that the frozen Fitz can be found en route and everything will be dandy (Seriously, the logic here could make an aged Captain America cry). After months on the search, the team are about to head back to Earth f to consider their options, but Gemma’s having none of it, discovering the most tenuous of leads and demanding they pursue it. An attack on their ship means she seizes the advantage and proples them onwards.

On Earth, Mac is now director of SHIELD, a walking-talking, binocular-visioned newly-minted, less jaded Nick Fury and a poster for extreme career-momentum, and taking advice from a pre-programmed guidebook in the shape of a holographic Coulson – the real deal having died between seasons. We saw Coulson and May head off to Tahiti for his last days at the end of Season Five. Strange portals seem to be opening up at various diverse points and the team discover that budget-bin Mad Max types are indeed coming through. Those who make it successfully seem to have some bombing agenda… and the ones who don’t make it fully through – ouch!   The Earth-based SHIELD agents essentially get their asses kicked, but the biggest gut-punch is when the visitors’ leader comes through another portal with a huge juggernaut and though he goes by the name of ‘Sarge’, the man looks exactly like… Phil Coulson.  That development might have been a tad more shocking and work as a genuine ‘WTF?‘ moment, if we didn’t know Clark Gregg was still going to be around and if that entire climatic sequence hadn’t been publicly released months ago – which seems to be the production shooting itself in the foot.

In itself, Marvel’s Agents of SHIELD – already renewed for another run beyond this – is perfectly fun and those who have stuck with it over the years will be happy to stick around and see what develops over its new shorter runs which often produce nice surprises. The cast work well together and Gregg (who directed this episode himself) delivers some well-choreographed fight scenes and new story strands. But there’s a real danger that show misses the ‘innovation’ it goes for by merely moving things around a little each season – the result being as much miss as hit. At a time when Marvel‘s screen efforts seem hot on a truly record-breaking level, this just feels a little less toasty, very ‘template-like’ and ‘lite’  when the show should and could have been taken advantage and chanced some real risks in the wake of other MCU developments and made a unique contribution.

Satisfactory… but a missed opportunity. 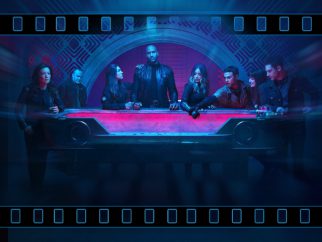 What the Dickens? ‘Christmas Carol’ has all-star cast…