'Avengers: Endgame' isn't the only Stark-based epic to hit the battlefield this weekend as 'Game of Thrones' finally delivers the battle for Winterfell...

The Battle of Winterfell, as the combined forces of Westeros take on the undead army of the Night King, is finally here and everyone knows their duty and their small chances of survival. Steel and magic combine to give the forces of man even a sliver of hope but flaming swords, catapults and arrows seem no match for the beasts that have come from beyond The Wall.

The battle begins and no quarter is given… no-one is safe and despite all the planning, it appears absolutely nothing can stop the Night King.

But as carnage reigns, does one brave warrior finally have the moment to make the biggest difference?

Apocalypses are like buses. You wait forever and then two epic battles uniting people named Stark appear in the same weekend…

Coming in at around half of the Avengers: Endgame running time, Game of Thrones’ The Long Night spends most of its 83 minutes devoted to the non-stop relentless carnage and chaos of a singular battle, one that we’ve also waited a decade to witness… and in many respects, it too delivers with crowd-pleasing promise.

Just prior to the battle beginning, Winterfall’s defenders have their swords set alight by Melisandre (Carice van Houten), an effort to guide them as they charge forth. It’s a strong and arresting visual, but even more so when, from a distance we see each flicker in that wave of flames and their carriers silently snuffed out by the coming darkness. It’s a clever sense of foreboding, the first real equivalent to a roll of thunder prior to a savage storm… and then… well, hell freezes over and it all breaks loose.  More akin to Saving Private Ryan‘s opening beachfront carnage meets the Jerusalem attack of World War Z than the more obvious Lord of the Rings sword-and-shield battles, there’s a long period when the sustained attack for and against Winterfall is just a mass of bodies and swords. Every so often you’ll see a face you’ll recognise – bloodied, angry and entirely reasonably terrified – and then you’ll cut away to another. It’s epic, if not always well-lit and amid that chaos and half-light it’s easy to lose track of who and what is happening. Several times you think ‘Oh, they just killed X‘ only to see a few minutes later that they’re actually alive and kicking. Indeed, the expected death-toll within the main players was decidedly low given what we expected to be an ensemble bloodbath.

Given that Jon Snow (Kit Harrington) and Daenerys (Emilia Clarke) are often considered the series two main leads, it’s interesting that both of them are largely sidelined for much of the episode. While they ride dragons and should have been the vanguard of the defence force, inconvenient weather clouds their strategy and while the soldiers battle below, we (and they) largely have to be content as they seek each other among the clouds. The dragon shots once again vary from being big-screen worthy-incredible and majestic to slightly-dodgy-greenscreen, but for the most part the winged beasts were held back for key set-pieces and the moment, near the end, where Daenerys’ steed is nearly brought down by the undead is a singular multi-genre moment worth tuning in to see.  The other character,  Bran Stark (Isaac Hempstead-Wright) is something of a maguffin, more recently given to spouting vague prophecies and projecting his consciousness into ravens. He performs both tasks for this episode, while being bait for the Night King, but somehow -despite being the Westeros equivalent to a mash-up of Dr. Strange and Charles Xavier – Bran doesn’t come across as remotely powerful or intimidating, just aloof.

And on second thoughts, sending Tyrion (Peter Dinklage), Sansa (Sophie Turner) and the womenfolk down to the crypt when you’re facing an enemy who can raise the dead, was probably not the best idea… though I can’t have been the only one wondering if they’d somehow have a zombie Sean Bean rising (I know he was beheaded, but how cool would that have been?). Arya’s scampering and hiding amid Winterfell’s inner sanctum momentarily slows things down for a few minutes, a scary oasis amid all the running and screaming. The sanctum scenes – with Masie Williams’ Arya dodging moaning, howling cadaverous enemies – are essentially the GoT production office definitively putting The Walking Dead on notice and reminding us of when zombies were scary rather than soapy.  Essentially Thrones slashed and diced almost every hope we had away, chipping away and leaving us wondering if anything could stop the silent-but-deadly Night King as he not so much roared into Winterfell as strode with a weary inevitability. And then…. yes, it’s Arya (where did she spring from?) and her sleight of hand bringing the King to his knees and shattered his forces (though Jon Snow’s furrowed brow at being saved at the last moment from icy dragon death-breath read more as a ‘Wait, did *I* just do that?‘ befuddlement).

The Night King’s silent arrogance makes Darth Vader look positively coy but that indifference was a double-edged sword, both story-wise and performance-based… robbed of some of that mystique and finally in the midst of battle, he came across as more of a stiff, nearly unstoppable cos-playing Terminator than some dark god.

The Long Night is certainly a spectacle that’s been a long time in coming and much of the episode is no less than thrilling. One of the central maxims of GoT is  Valar Morghulis (All men must die…) That being said, more people make it out alive than you’d expect (surviving repeated severe injuries) and there’s a slight feeling that the production is reminding us that though this episode has been in the making for so long,  there are still three episodes to go and didn’t want to make this seem a definitive final statement just yet. 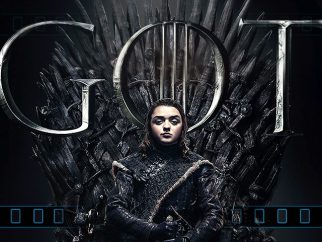