It's the first film in history to ever have a $billion weekend... but other than money, how does 'Avengers: Endgame' measure up?

Half the inhabitants of the universe turned to dust.  When Thanos snapped his fingers it wasn’t just heroes that were affected, but unknowing people who either crumbled away or were left without their loved ones. As the remaining Avengers struggle to deal with the magnitude of their loss and its aftermath, dealing with it in very different ways, the surviving core team look for any way to un-do what happened and restore their friends.  But even the arrival of a new hero, who has been off exploring the galaxy for several decades, may not be enough for them to do anything but avenge the fallen.

As time passes and the world tries to rebuild anew, another glimmer of hope is offered when yet another lost hero returns, but their idea is also fraught with problems, danger, contradictions and potential further consequences.  Even if there is a way to undo the incredible damage done, what hope can there be when Thanos still lives?

There are two undeniable facts to accept before stepping into the local multiplex to take your seat for Avengers: Endgame (three if you need to factor in a likely potty-break).

The first is that the film is bullet, laser, atomic-blast and critic-proof… the marketing, product tie-ins, the record-opening in China and the unprecedented-profitable previews that began mid-week and insured the film produced the first billion dollar weekend in cinema history, have ensured that this much-anticipated sequel defines ‘must-see’ cinema.  It could be the worst movie ever made and the opening salvo would still be deafening.  The second factor is that by the film’s end, you know there will be some kind of reset… because a) this is comics-based and b) no-one in Hollywood wanted this to be the final Marvel movie ever, just the most profitable. For both reasons, death ‘s dominion is likely to have a revolving door rather than pearly-gates…

The good news… while expectations were ridiculously high going in (and I fully admit that even a weathered critic like me got a buzz as we took our seats) all in all, Endgame achieves the almost-impossible and the certainly-admirable and does end up satisfying on many, many levels… die-hard fans will salivate at the set-pieces on offer that reference not only the cinematic history of Marvel but some key moments from the comics and the knowing character moments long in the making… but perhaps the event is actually personified by the ten year old kid behind us who was gazing at the screen in wonder and clapping with unbridled glee at regular intervals.

Endgame is an unusually patient and structured film that spends a fair amount of time initially wrong-footing its audience (the first twenty-minutes are somewhat ‘meh’ in the pacing department) and sets up a PTSD (Post-Snap Thanos Decimation) world that seems to be able to do little but grieve and move on. The surviving heroes lost, but lived and that’s their punishment and predicament. It’s actually the second glimmer of hope (Hello, Ant-man!) that ignites the heart of the film and sets the heroes on another course which remains both dramatic and fun but also with touches of pathos.

All the major Avengers (even Hawkeye) get their moments and in some cases real closure. Chris Evans as Steve Rogers gets to not only be the upstanding hero but actually be behind himself as he subverts Hydra is a nicely-pitched elevator throwback. Downey’s Tony Stark may still be flippant but is now far more committed to a cause bigger than his own – at all costs. Johansson’s Black Widow is heading off for a prequel movie, but makes the most of her new leadership role and successfully clears her ledger. Ruffalo’s Hulk merges Banner and green goliath for something new and Thor…. well, controversially essentially looking like the Big Thorbowski  (or maybe if Jason Momoa is WetThor, Hemsworth is now Bud-Lightning) for most of the movie, with extra padding but Chris Hemsworth has fun with it, even if the fat-suit joke wears a little thin.

Much has been made about Captain Marvel (Brie Larson) securing her credentials in the Marvel Cinematic Universe, but the truth is she’s almost an inconvenient after-thought in this entry – her absurdly high (and somewhat conveniently vague) power-set are used to all-too-quickly save Tony and Nebula near the beginning of the film and reappear towards the end of the film’s final battle but not tip the odds towards our heroes too early. Even that, one would think, rather important post-credit scene from her own movie (in which she first meets the Earth-based Avengers) is nowhere to be seen in the finished cut and it’s becoming clear that the Russo Brothers masterfully played against leaks with some faux-footage in their trailers). Larson’s scenes in Endgame were actually shot prior to her work on her solo movie, which might explain why she’s sidelined and played with a different lilt here. But there are a delightful raft of cameos, some expected, some delightfully surprising and they all form an intimate supporting tapestry that unapologetically references key elements and characters from the last decade.

While immensely entertaining on every level, one has to accept some valid quibbles, most of them technical/logical: for a film that spends so much time on explaining the science of time-travel (and ridiculing time-travel movies that get it ‘wrong’), it does seem to leave some glaring contradictions in there.  If Loki now escapes after the events of the first Avengers movie, then many of the subsequent events can’t have happened remotely the same way, if Thor ‘steals’ Miljinor during his trip to Asgard, then how come that era’s Thor still has access to it and if Thanos, Gamora and Nebula hitch a ride to five years hence, then that surely rubs out all the events of Guardians of the Galaxy which are necessary to have got us to this point? Presumably the entire cast of the upcoming Spider-man: Far from Home got ‘Thanos’d’ otherwise that five year gap will be iffy on their ages? Why does Steve Rogers have to single-handedly return all the Infinity Stones to their past placements (on Earth and somehow on other planets) and even though it gives him a rather touching happy ending, it would surely play havoc with the timeline he’s so painstakingly repairing? Yes, it’s enough to give the hollowed-out skull of a Celestial a headache…

But only some of these elements will probably occur to you during viewing  because by the time the film heads into its final act, there’s no time for deep thought or toilet breaks. The final battle royale is simply astounding, each hero given something to do and distinct enough not to get too lost in the mass attack. Lord of the Rings may have set a high standard for battlefield excellence, but Avengers: Endgame‘s denouement surpasses it, the ultimate climax to everything that has gone before and is simply breath-taking in execution and spectacle… and includes a moment of co-operative female empowerment that doesn’t forgive it being a decade before there was a woman in a solo title-role, but points to how far things have come.

No, it’s not perfect (thematically it starts as The Leftovers and ends as Manifest) and will not please everyone, but it’s aimed at both the weathered cynic and the unapologetic party faithful and captures both… and in that sense plays all its myriad Marvel beats well… and with the power of a booming orchestra of instruments that all have their moments.

The new question will be where we go from here. That five year jump and gap in peoples’ lives should have created a lot of hiccups and even profound society changes. They could be creative cat-nip for future chapters or may just be ignored (next month’s return of Agents of SHIELD takes place between Infinity War and Endgame but will it show a decimated world like it really should do?)

It will be hard, nay impossible, to surpass this decade of superhero demolition and reconstruction at the cinema that Marvel has managed, but it’s clear from the many new projects in the offing that they will try… 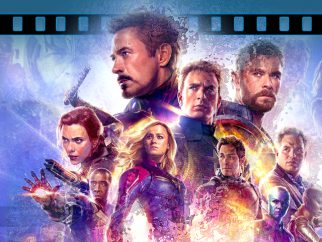