Game of Thrones 8.2: Let’s make this a Knight to Remember…

Great Brienne: The latest episode of 'Game of Thrones' proves that once a King, always a King, but once a Knight is enough..?

Slowly but surely, the White Walkers and the cold forces of the Night King are making their way towards Winterfell where an uneasy alliance between one-time (and even current) enemies is held together by necessity and pragmatism.  As the uneasy allies assess each other and their chances, many find time to grab what few comforts they can – whether it be looking to right past wrongs or to a future that could still be snatched away.

But as almost certain damnation gets closer by the hour, the wisest among the warriors within Winterfell’s walls have to consider: even if they should survive the next twenty-four hours… what will come next?

The second episode in this farewell to arms and Game of Thrones, proved without question that while spectacle and drama might be the poster imagery of good drama, it’s the quieter, nuanced connective tissue that can transform good to great and great to quite amazing.  And it was in such personal moments of ‘A Knight of the Seven Kingdoms‘ that Game of Thrones truly excelled, creating an hour of television that won’t have pleased absolutely everyone but may yet feature strongly in most fans’ top ten episodes of the entire run…

Essentially, this is mostly a walk and talk entry – an episode in which everyone is grimly looking to the future, or what’s left of it: not seeing much chance of survival from the odds they face and therefore seizing the moment and taking care of various personal business – a lot of it long overdue. However though this is the calm before the storm, the sense of foreboding and tension never lets events feel boring or too drawn out and long-term fans of the show will like some of the pay-offs.

The episode is full of great character moments – lines of dialogue, some of them hilarious, some of them pointed and some just a touch of both – often including copious amounts of alcohol… When Bran (Isaac Hempstead-Wright) looks upon Nikolaj Coster-Waldau’s Jaime (the man who threw him out of a window way back in GoT‘s opening episode after Bran witnessed his incestuous relationship with Cersei) he simply notes: “The things we do for love…” and the secret subtext is all but yelled. Series have a habit of drawing out secrets over a long time, but as the end draws near, GoT is now wisely wasting little time in joining existing dots – and though it’s perhaps not so wise on the eve of battle, Jon Snow admits his royal lineage to Daenerys, a Queen who certainly has mixed emotions about learning she technically has competition for bragging rights on the Iron Throne and that many of the people around her would probably prefer Jon to reign instead of her. Not to mention she now knows she’s sleeping with her own nephew… but, hey, priorities!

Little Miss Dynamo, Arya (Maisie Williams) whom we are used to seeing as a pint-size personification of vengeance is probably at the most human we’ve seen her in a long time. Deciding she doesn’t want to die a virgin and needing to have some sort of emotional outlet ahead of the battle, she and Gendry (Joe Dempsie) do the deed. It’s rather a coy scene, at least by GoT standards, but fans might have felt a little awkward given that Maisie Williams was only eleven years old when the series began (she’s now twenty-two) and Arya’s age is somewhat nebulous. That being said, this is a series with murder, rape, pillaging and incest, so this might all be considered a rather low-key controversy.

But in a collection of great performances, this is almost certainly Gwendolyne Christie’s episode. As some of GoT’s most valiant footsoldiers gather around the fire to drink and make as merry as likely doomed footsoldiers can (with the flame-haired Tormund – Kristofer Hivju – continuously to shamelessly flirt with Christie’s Brienne, much to her horror). Jaime addresses Brienne’s unspoken wish to be a knight in a world where women don’t have the same rights and notes that while a king usually does so, a knight can also bestow that title on another, which he offers to do. Initially she refuses but Jaime – for once – is as good as his word and the teary smile and the round of applause from her comrades-in-arms is likely to have brought the same from the viewing audience. That scene also has a beautiful version of Jenny’s Song, sung by Podrick (Daniel Portman), something that fans of the original novels (specifically the A Storm of Swords volume) will likely recognise. A cover version by Florence and the Machine is played over the closing credits and the production has released a video for it (see below).

One can only do an episode like this after spending an age building up characters people care about and on that level, the show has succeeded in spades.

Next week – and for the remaining four episodes – the running-time is almost doubled for each entry. With the White Walkers at Winterfell’s borders, it’s all to play for… 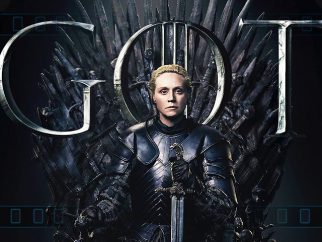 The Butler does it. A Worthy trailer for a pre-Bat Alfred….