A stylish and ambitious story of sf-tinged insurrection, 'Captive State' is ultimately restricted by its pacing...

It’s nearly a decade after an alien invasion, one initiated by flashes of destruction, continued by stealth and validated by collusion.  The richest echelons of society have bribed their way to survival and are arguably going about their business just as before, but doing more to exploit the poor at at the whim of their distant insect overlords – creatures that hover just off world or in the darkness below.

But the resistance movement endures in Chicago, even though its days appeared numbered by attrition and the passage of time.  Gabriel Drummond (Moonlight‘s Ashton Sanders), brother of the possibly dead activist Rafe (upcoming Lovecraft Country‘s Jonathan Majors) finds himself reluctantly drawn away from his tepid plans to escape across the sea and, instead, into the grip of small cell of resistance fighters who are planning one spectacular counter-measure against their oppressors. Weathered middle-management police chief William Mulligan (John Goodman) is monitoring Gabriel’s movements and tells his condescending superiors of his suspicions of a major attack.

As time ticks down and precise, intricate plans look to be unravelling, various competing agendas are at play, but an old promise may hold the key to personal, moral redemption and even humanity’s survival…

Vedette: A sentinel stationed on the outpost of an army, to watch an enemy and give notice of danger…

Captive State, arriving with only medium fanfare, is far more ambitious in its aims than its limited marketing has suggest – but by the same token it may disappoint those expecting it to be exactly as seemingly promised. Advertised as an inner-city Independence Day what we get instead is essentially very different:  the idea of the original 80s invasion mini-series V mixed with the subversive energy and plotting of the revolutionary V for Vendetta. It’s actually an old-fashioned war-film, charting a resistance/terrorist cell (depending on your point of view) in occupied territory and then cloaked with some token high-concept trappings. It’s the slow and steady long-game art (and cost) of resistance  rather than the wham-bang-thank-you aspects delivered by so many others in its genre.

As a mini-series and with such a format’s pacing, Captive State would have fared far better than the limited, feature-length story we have. It’s easy, and frustrating, to imagine the same production given the room to explore its characters in a Rashomon, tighter-focused endeavour). Here, with too many characters to follow at once and sudden shifts in focus (coupled with an uneven momentum through its ‘seems-like-longer’ 109 minutes) the audience don’t get a centre to focus upon and the ‘mission’ becomes the star rather than the revolving carousel of characters, all with their parts to play. That’s not always a bad thing (indeed, far too many films are created as star-vehicles rather than building better stories to plant them in) but you do need to anchor yourself somewhere to get your bearings and the film instead spends more time constructing its house of cards rather than playing its poker hand.

After creating a new moribund world, director Rupert Wyatt (Rise of the Planet of the Apes) is less concerned with the background specifics of the invaders – more their social impact – and all we get on the alien front is a couple of decent, claustrophobic CGI monster scenes to justify their danger and provide fodder for the trailer. But otherwise they are distant less-than-benevolent or patient overlords, there as an effective metaphor for any arm/tentacle-length oppression. Given the restrictive format, we’re not allowed to know more about them or oversee what could have been specific and interesting levels of duplicity and complicity among the bureaucrats. (Think Counterpart with Martians)

Though not perfect, this is one of the few films that doesn’t blandly fall apart in the third act. It has the courage of its convictions and has a denouement that largely works and satisfies, building from what has come before (though, with no spoilers, it could have done with pruning a good few minutes from the middle and giving them to the end,  rather than just inferring what’s to come after the last scene).

The inclusion of Goodman as well as equally talented Vera Farmiga, Ben Daniels and Alan Ruck give an indication that this is more than a formula entry. Genuinely clever – a second viewing highlights flourishes or even set decorations that are more important than they initially appear –  and thought-provoking, rather than actually ‘entertaining’, Captive State is worth seeing, but one suspects it will do better on DVD or Netflix once word of its value spreads.

Captive State is now on general release in the US from Focus Features. As yet, there is no UK release date set. 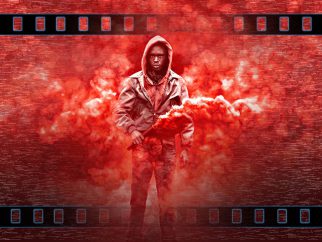