In NBC's new drama, is ex-CIA high-flyer Erica Shepherd a wolf in sheep's clothing or an incarcerated innocent? Or both?

Three years ago, a series of attacks resulted in the deaths of the most successful terrorist-hunting operatives working at the CIA and implicated their boss Erica Shepherd (Jennifer Carpenter) who had given up their identities to one of the FBI’s ‘Most Wanted’ Mikhail Vassily Tal. Arrested and branded one of the country’s worst traitors, Shepherd has been sitting in a maximum security black-site ever since.

But now Tal appears to have reignited his reign of terror and the FBI are instructed to offer Shepherd some minor concessions to her strict imprisonment conditions if she can help offer a way to track him down.  Agent Wil Keaton (Morris Chestnut) is horrified at the prospect, especially as one of the slain operatives was his fiancee and he feels doubly betrayed by Shepherd’s actions.  But he reluctantly follows orders, he and his own team of agents ever watchful that Erica is still playing them all.

But while the insights Erica has, offer on Tal’s strategies may prove valuable, the secrets regarding her real reasons for that original betrayal may be even more revealing… and she’s going to use every ounce of her knowledge and abilities to make sure she never goes back to that cell…

Many shows need varying suspensions of disbelief in which to succeed. And though NBC’s mid-season replacement The Enemy Within is certainly entertaining enough in predictable ways, the more you think about its basic set-up the less it really makes any sense outside tv primetime processing.

We have to accept that a respected high-ranking CIA official is essentially coerced by threats on her family into revealing fatefully dangerous information  about her colleagues (which results in them being immediately killed with amazing no-time-to-warn-them speed), when her complicity is revealed and she’s subsequently arrested going about her normal I-just-didn’t-compromise-everyone job, she actively chooses NOT to reveal anything her reasoning to anyone. Instead she’s vilified within her department and the media as a modern day Benedict Arnold-like traitor, yet instead of receiving a death-row appointment, she is locked in a ridiculously high-security cell (the special on-screen variation reserved for more photogenic Hannibal Lecter types) and apparently quietly accepts her fate… or at least is willing to wait it out. It’s fine that she thinks she’s protecting her daughter from either governmental or terrorist repercussions, but it frankly makes no sense that she doesn’t at least try to explain to someone how she was blackmailed and the ongoing danger that could be still posed to her surviving colleagues. Or, on the flipside, how she’s suddenly willing to do just that now for the sake of a little more freedom that she must surely have been offered before.

Carpenter’s Erica Shepherd is clearly highly intuitive – Sherlocking her way through every situation to turn it to her advantage – and the implication is that, at best she’s a damaged personality with dangerously astute skills and at worst she’s perhaps manipulating everyone around her because she’s exactly what they think she is – a sociopathic predator. However, though the series wants us to question everything, it’s made clear how well liked Erica was before the incident (so who would initially believe she was a willing traitor?) and from some scenes we see what her motivations appear to be – to see her daughter again and so it’s unlikely our heroine is all-bad.  But while Shepherd is a female character in a position normally reserved for men (most notably, James Spader in The Blacklist which at least began more strongly before faltering) one wonders how far the premise of her secretly helping the team expose potential double-agents can work. Can colleagues continue to hate her if they know the fuller ‘truth’ and how can they be expected to work with her if they don’t?

Carpenter is a capable actor  – memorable for key roles in Dexter and Limitless –  but here spends most of her time using her eyes to do the talking while the rest of her face is having an internal struggle on finding an expression it’s comfortable sticking with – never being able to singularly commit to a smile or a frown and the result it somewhat disconcerting. That being said, that’s a possibly deliberate feint and she’s certainly the most capable and interesting factor in a show that’s not quite as good as its talent – desperately trying to be a primetime network’s answer to more risk-enabled cable-hit Homeland but inevitably ending up more like a black-site variation of 24, Blindside and The Blacklist.

Morris Chestnut (as Will Keaton) has the unenviable task of being the straight man and foil – essentially reduced in the pilot episode to a purely reactionary role of looking disapprovingly at Shepherd and regularly threatening to quit. He’s not quite viscerally angry enough for someone forced to work with the woman arguably responsible for his fiancee’s death but just pissed-off enough to keep threatening Shepherd  with cliché-scripted menace if she betrays them again. It’s not entirely clear whether Shepherd likes him hates him or just pities him – though by pilot’s end, there’s definitely the feeling she wants to win his trust again.

All-knowing terrorist puppeteer Mikhail Vassily Tal feels like the generic boo-hiss big bad guy that populates every other conspiracy-led show and wisely stays firmly off-camera, reduced to incriminating, threatening phone-calls in a raspy East-European voice… and one suspects that what he will remain that way for the foreseeable while the team run around from one conspiratorial dilemma to another (finding minor clues to his identity). We already know one of his other pawns is in play by the end of the pilot’s end, but how long they’ll survive is open to question. While purposely making her prickly and unglamorous, The Enemy Within is unlikely to pose a bait-and-switch with Shepherd and her allegiances….simply with the unease she generates, though any savvy viewer will obviously be watching the supporting cast for the merest and likely inevitable suspicious duplicitous twitch.

The idea of thousands of sleeper agents (‘more than ever before in history’ the infodump at the start breathlessly tells us) is supposed to be scary and in the current political and social landscape it could indeed be a rich source of exploring trust and paranoia, though one suspects those issues will largely take a backseat to gun-play and narrow escapes. Production-wise it’s all glossy enough (car-chases, shoot-outs, clinically-clean boardrooms and sterile prisons etc) though the initial scene in which Shepherd is captured in Washington DC is quite clearly the product of decent but not perfect post-production CGI-plates, with something that creates an uncanny valley disconnect in the capital backdrop.  Yes, it’s certainly more diverting than the more comedic and wacky Whiskey Cavalier, which at least IS comedic and wacky, but that’s fairweather praise and The Enemy Within doesn’t yet feel like anything we could do without – nor really any different from any of its templated-action network stablemates.

The Enemy Within is broadcast on Monday nights on ABC… 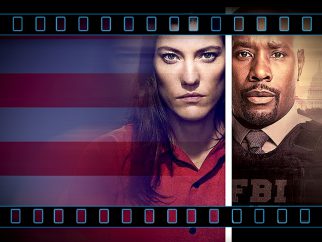