They take a lickin' and keep on kickin'... Marvel's superheroes become official first-class crime-fighters this March...

When it comes to superheroics, nothing is faster than the mail – or, for that matter the female… and this March the UK’s Royal Mail is issuing a first day cover and collection of stamps featuring several of the comic company’s characters.

Many of the more famous Marvel heroes have found further success on the big-screen, most recently coming together for Avengers: Infinity War. Robert Downey Jnr. plays Iron Man, Benedict Cumberbatch is Doctor Strange, Chris Hemsworth is Thor, Tom Holland is Spider-man, Chadwick Boseman is Black Panther, Mark Ruffalo is the latest to essay Bruce Banner /The Hulk and Brie Larson is about to debut as Captain Marvel in her own film before appearing alongside the other heroes in the upcoming Avengers: Endgame.  Agent Peggy Carter, resourceful British WWII spy and paramour of a pre-Captain America Steve Rogers, was played by Hayley Atwell and featured in several Marvel movies before headlining two seasons of her own ABC series. 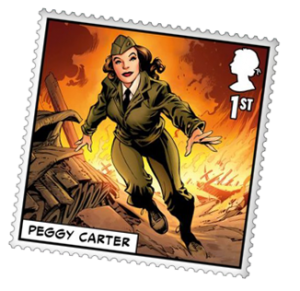 Captain Britain and Union Jack may be familiar to die-hard Marvel fans of the comics and are obvious patriotic additions to the line-up, though neither of the them have yet featured on the big-screen.  All the characters on these new stamps are drawn by comics legend Alan Davis (who helped reinvigorate UK comics and Captain Britain in particular – alongside writer Alan Moore – in the 1980s and beyond) and inked by regular collaborator Mark Farmer. The larger presentation packs also feature material by Neil Edwards and Alan Cowsill.

You can find out more about the various special presentation packs including stamps, postcards, coins and brochures  – ranging in price from 4.99 to 99.99 – that will be available in March from the Royal Mail‘s official site…

Netflix’s new ‘Haunting…’ will be to the Manor spawned…