Turning the horror and war genres on their Axis with this 'Band of Brothers Grimm'... EchoChamber's review of 'Overlord' is reposted as the title hits DVD...

June 1944 and as Allied Forces get ready for D-Day, a team of soldiers have been tasked with taking down an important transmitter deep in the French countryside.  When their plane is shot down, Corporal, Ford (Wyatt Russell) reminds his few survivors how much depends on the decisions they make next and though it’s not a popular choice, they press forward in search of the village church in which the despicable enemy has set up base.  But the building is well fortified and the small surrounding town has lost many of the people who might have helped the soldiers – the men taken into the bowels of the hillside holy building and never seen again.

When the most junior member of the team, Boyce (Jovan Adepo), is forced to hide inside one of the Nazi vehicles, he discovers what is really going on in the base – and that the transmitter, important though it is, may be the least of their problems. Have the Führer forces found the ultimate weapon…or something that will doom the last vestiges of humanity? 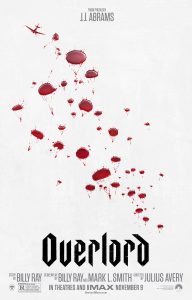 Marketing at the time of its cinematic release and some of the poster imagery might have led the average audience member to believe Overlord was an all-out grand-guignol horror movie that just happened to be set in wartime… but the truth is that the film is far better described as the opposite, a war-film that happens to take on a scouting mission into horror.  Indeed, for the first thirty minutes of the movie there’s certainly more of a Saving Private Ryan / Band of Brothers tone to proceedings with nary a supernatural element to be found… but clearly a vast amount spent on bombastic special-effects. The initial sky-battle and burning plane sequence hold their own with many of the bigger tentpole blockbusters and then the  quieter, resulting tensions among the few survivors making their way across the rural French countryside may rely on setting up the well-known archetypes, but it’s all packaged together well and sets the scene for what is to come…

There are few actual surprises as such, but very much a deft delivery and a clear love for both aspects of the military and monster mash-up. Overlord knows how to play to the strengths of both the war and horror genres and wisely never lets one totally dominate the other, allowing the audience to invest in its misfit military unit before introducing something unusual to the story.  Instead of the cheap effects-driven horror outings of recent years (think every Resident Evil, Underworld etc) there’s a feeling of Tarantino’s  Inglourious Basterds to it all, a familiar cinematic template given a slightly askew vibe that points to something ‘off’ but frankly, Julius Avery (recently announced to helm the Flash Gordon remake) has a firmer hand on the reins than the more famous auteur and knows when to course-correct rather than showboat. And it’s really not until halfway through the film that any of the supernatural seeds start to germinate into something more tangible. Yes we know something bad ™ is happening within the church/castle that our heroes are planning to bomb, but until Boyce manages to enter the tunnels beneath the structure, it’s not entirely clear the genuine physical nature of that threat. The third act of the film is more traditional ‘monster’ territory, like George A Romero being asked for a take on Captain America and the results of the Nazi experiments are sufficiently nasty and cinematic to satisfy all comers.

British actor Jovan Adepo (The Leftovers, Jack Ryan) shows strong form, anchoring the picture as Boyce, a character forced to prove his worth to his team-members and to himself. To these ears at least, he pulls off a decent southern-states accent and gives Boyce a backstory that hints at some of the problems he’s had to face. Fellow soldiers… Wyatt Russell (Lodge 49) makes a strong leader with echoes of a grungier version of  ‘Steve Rogers’ style patriotism and commitment to the mission at all costs; John Magaro is the typically cocky Italian-American with a big mouth but a decent heart and Bokeem Woodbine steals the early scenes as the mission’s over-all commander.  The ‘undead’ element is managed well, walking and lurching around the line that’s both dramatically visceral and occasionally comical. There are moments with Iain de Caestecker (Fitz in Agents of SHIELD) that are tragic but also recall  Vincent D’Onofrio’s ill-fitting human suit in the original Men in Black. Pilou Asbæk (best known for his role as Euron Greyjoy in Game of Thrones) makes an excellent perfectly-fine-to-punch Nazi, dripping with disdain and faux-superiority and even before the last act is the exact kind of monster you want to see get his comeuppance. Relative newcomer Mathilde Ollivier makes an enigmatic impression as local girl Chloe, determined to keep her family safe and manages to be far more than the ‘love interest’ with which a lesser film would have sought to pigeon-hole her.

There’s no Oscar to be won here, but those presuming a cheap budget genre romp or a stylistic but somewhat sterile J J Abrams entry (it was initially rumoured to have connections to his Cloverfield franchise, but there’s noting obvious if so) may have to considerably re-evaluate their opinions because Overlord ends upsetting any low-expectations and being very much the highly enjoyable, collective sum of its hybrid, reanimated parts – and being a largely satisfying, well-executed romp quickly heading for deserved cult status. 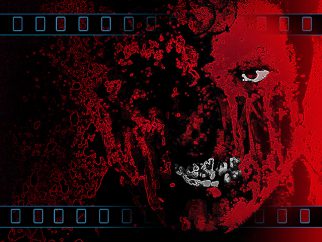