Trapped by a star-sized object, the crew of the discovery face numeral obstacles, but do they have nothing to fear but sphere itself.

While warping in pursuit of what they believe to be Spock’s fugitive ship, the Discovery is suddenly yanked out of warp and finds itself held in place by an object that looks like a dying star. However there’s clearly less obvious forces at work when the universal translator stops working and the crew-mates find themselves hearing  hundreds of different languages across the ship. One answer seems to b to get Saru – who helpfully learned over a hundred languages – to use his skills to fix the problems, but he may have problems of his own as he faces the prospect of his imminent mortality.

Elsewhere, Tilly isn’t quite as rid of her alien parasite as she thought and a disagreement between Stamets and Jett Reno escalates from a war of snark into a battle to save Tilly and expose a problem in the Discovery’s ongoing travel-mode…

Discovery continues to boldly go, though it doesn’t mean there aren’t some detours. In many ongoing stories there is the recurring problem of artificial delays. As with any show that sets up a season-long story-arc, one has to set up obstacles to stop the heroes getting from Point A to Point Z too easily.  With Discovery you have a titular ship that can  warp to anywhere in the known universe (and, demonstrably, beyond) in a fraction of the time that the other space-going vessels can muster. Essentially, the latest ‘Search for Spock‘ should take mere minutes but four episodes in and we’ve been distracted by forgotten colonies, Klingon machinations and now a rogue dying repository of knowledge determined to hold and distract their attention from the main ongoing mission.

It’s not to say it’s not entertaining. Though the tone remains inconsistent from week-to-week, the production values are obviously high and the cast has really come together. But, again, Discovery‘s placement in the timeline is something that requires a suspension of mythological memories or for almost random lines of dialogue placed in a scene simply to hold the seams together. Some work better than others. Pike’s dislike for holographic projections and some technical snafus on the Enterprise attempt to explain an in-universe reason for the Original Series lack of such forward-thinking tech in a series that’s supposed to happen less than a decade after this show. Equally – spoiler alert – a database of stellar knowledge covering a hundred thousand years gets uploaded reasonably easily once the language barriers are sorted and that seems like a find of galactic cultural-shift proportions (which means something happens for all that knowledge to be lost or it’s a convenient ‘look-at-me’ maguffin that turns out to be worthless and that will never be referenced again despite the implications.

The gangly Kelpian Saru (Doug Jones) has always been a character ripe for exploration. In early episodes he seemed like the cosmic equivalent of a slightly aloof English butler promoted to a higher rank and Doug Jones succeeds in imbuing him with a quiet nobility if lacking bedside manner. Faced with possibly imminent mortality (and referencing Doug Aarniokoski’s Short Trek, The Brightest Star), we get to see a Saru determined to do everything he can to save his colleagues, even if it’s at personal expense. The crew watching as they see him leave the bridge for what might be the last time is arguably more powerful in its silence than the subsequent one-on-one with Michael crying as she explains how she loves him like the family she doesn’t have. The crewmates have a friendship and a camaraderie and a trust built out of the odds they’ve faced together, but the sheer scale of the emotions on show for that one-to-one scene seemed a little scripted for the scene rather than organic… bearing in mind that she’s surprised to hear so many elements of Saru’s backstory that she would likely already have known if they were so close (though Burnham is currently feeling conflicted about her other brother/sister relationship with Spock).  That been said, Jones and Martin-Green as mainstays of the show, both sell and deliver their moments as always.

The ‘translator virus’ moments lead to some interesting and funny dynamics, though the necessary drama/humour comes from everyone randomly having their words changed and not being able to understand each other – and that suggests the translator is more Tardis-based system of ‘hearing/understanding’ than in people merely listening to each other. (ie: If the bridge-crew had just turned off their translators, wouldn’t they have been able to work as normal to some extent?)

However the most fun level of communication and interactions are happening in the engineering section.  Engineering ‘grease monkey’ and duct tape enthusiast Jett Reno (Tig Notaro) makes a welcome return and her dry, acerbic interactions with Stamets (Anthony Rapp) and Tilly (Mary Wiseman) are a delight. Equally so, the friendship between Stamets and Tilly and the moment they sing a Bowie song before attempting trepanning her (and in what other show could you have that as a story-beat description?) is genuinely touching.

Discovery‘s strengths continue to be its good actors, fun character-interaction and high level of effects – elements of which have scuppered many a show. Four episodes in and it’s doing a lot of things very well… these are characters we’re happy to spend time with and with believable camaraderie and dry wit (at which this episode excels). We want to see more of Reno/Notaro and also Rebecca Romijn’s briefly seen Number One. (On that subject, was that really all we get of Number One… or were additional scenes clipped and for what reason Commander Nahn (Racahel Ancheril) is suddenly inexplicably aboard – it’s that connective tissue and explanation that the show sometimes stumbles with, with too much or too little)  – but it’s still a show with a divided focus, so it may be a few more episodes before we know if it has found its niche.

An Obol for Charon, named after the ferryman on the river Styx for those wondering about the title of the episode, is full of interesting moments and we can only hope that like the Bowie song, ‘my spaceship knows which way to go…‘  So far, its meandering, but the scenery is beautiful. 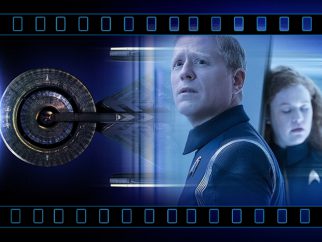 The Singer, not the (Red) Sonja. Warrior woman actioner axed..?