Hanna: An Ingenue Hope comes in from the cold…

The latest movie-to-series adaptation from Amazon expands out the ideas first seen in the 2011 feature film 'Hanna'...

It is 2003 and Erik Heller (Joel Kinnaman) breaks into a medical facility in Romania, managing to exit with a young baby girl – and several dead guards in his wake. As he and the baby’s mother flee, they are pursued by all the forces that Marissa (Mireille Enos) can muster.  The stark order is the child is to be taken alive – the adults are… disposable. After a fiery end to the chase, Marissa believes everyone has perished.

2019: Erik lives with his daughter in the Polish wilderness, never venturing out beyond carefully marked borders. For years he has been training ‘Hanna’ (Esme Creed-Miles) to survive, not just against the harsh environment but from anything the world may throw at her and the specific dangers of the past. She can speak many different languages, she knows several fighting techniques, she can kill a man in any number of creative ways.  But, as she asks her father, if she is never to venture out into the world, why is he training her so well?

The answer comes when Hanna breaks the rules and goes beyond the tree-line of their wintry home.  Her emergence does not go unnoticed.   Now, whether Erik or Hanna truly want it, they are going to have to flee into the world – because the world, in particular Marissa,  has a long memory and lots of patience.

The 2011 film Hanna starred then rising young star Saoirse Ronan alongside Cate Blanchett and Eric Bana with Joe Wright ably handling proceedings from the director’s chair. A relatively simple premise, compact and streamlined, the film also had a quirky dark humour and several years on, it still holds up to viewing. Ronan already had a self-assured presence (which she has demonstrated in The Lovely Bones and subsequently carried through to the likes of Lady Bird, Little Women and Mary, Queen of Scots), Bana makes a solidly stern but caring father and Blanchett always does well with ice-queen ruthlessness (even if dogged there by an awkward accent).

Hanna is now the latest project to take a feature-film idea and expand it out to a series format (other recent entries have included Condor and Jack Ryan). These adaptations give the creative force behind the production more room to breathe and expand out the story and characters. Usually that’s beneficial, though pacing becomes even more important as anyone who is familiar with the original source material will likely be aware of the slower pace and still need to be entertained. In short, though there’s more time, that time has to be used wisely.

Those who are familiar with the film will note that the opening episode (streamed for free for Amazon Prime subscribers for twenty-four hours after the Super Bowl and due to formally land with the other seven episodes in March) sticks to many of the same early beats as the feature, recreating several key scenes from the film’s twenty minutes or so. After an expanded action-packed first act (including baby-stealing, car-chases, antagonistic helicopters and death) things slow down considerably as we move to the present day and explore Hannah’s limited world, gently pushing at the boundaries and wanting to know more, just as she does. The answers, this being a series, come a tad slower and with little real clarity in the opening salvo.

If timing is important, then casting is essential and in recent years there have been notable additions to the gallery of ingenue action stars that refuse to simply play sidekick to older male mentors (a modern trend that goes back to Natalie Portman in Leon).  On the big-screen, in addition to 2011’s original Hanna, there was the coldly vampyric Let the Right One In (2008) featuring Lina Leanderssson as the eternal twelve year old (later remade in Hollywood as Let Me In with Chloë Grace Moretz who also impressed as Hit Girl in 2010’s Kick Ass and its 2013 sequel) the silent-but-deadly Dafne Keene quietly stealing 2017’s Logan out from under the claws of Hugh Jackman and in the best-selling The Last of Us 2013 computer game there’s the zombie-fighting Ellie (voiced by Ashley Johnson) who moves centre-stage for the game’s much-anticipated sequel due in the next year).

Here, in the Amazon version, Esme Creed-Miles (daughter of the fearless Samantha Morton, who will next be seen as ‘Alpha’ in The Walking Dead) equally holds her own though with less to work with initially. Esme manages to handle both the physical demands of the role (believably taking down men twice her size in the freezing cold like some wild animal) and the less sure first steps into physical and emotional womanhood that begin to alter Hanna’s perception of her daily existence. Mireille Enos and Joel Kinnaman memorably paired on tv thriller The Bridge and each bring a singular strength to their characters for this, now on opposing but equally ruthless sides – though, so far, they’ve shared no scenes as pursuer and pursued.

The feature film had a distinct offbeat style, one the series has in content but not in visuals, so it will be interesting to see how such elements are represented or reproduced. The opening episode is intriguing enough to attract audiences to stick with the programme / program and find out what Hanna discovers about herself and the world and the eight-episode format seems a good pacing to tell the initial story.

Whether there is scope beyond that, we’ll see, but it’s promising… 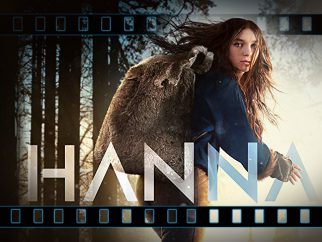