Will FOX’s ‘The Passage’ be Saved by the Girl..?

Adapted from a best-selling trilogy of novels, FOX's new series 'The Passage', has something to say - but needs to decide what that is...

When a science expedition to find an almost immortal man in the wilds of Bolivia goes horribly wrong, one of the scientists involved Dr. Tim Fanning (Jamie McShane) is left mortally wounded in an almost cannibalistic attack – or so it seems. In fact, he recovers from his injuries with remarkable speed… but the price of survival is high. Though Fanning now seems immune to most diseases and infections, he has a horrible physical change, a thirst for blood and a psychosis that sees him imprisoned in a cell at the ‘Project Noah’ facility of fellow scientist Dr. Jonas Lear (Henry Ian Cusick). Determined to find a cure, Lear and his assembled team have been trying a number of procedures on Death Row inmates. The inmates have been persuaded to ‘offer’ their services rather than face definite death… though they have no real idea what they’ve signed up for and if they did, they might have chosen the electric chair.

There’s been very limited success in the research, but one of the team notes that the younger the subject, the more they seem able to hold off the more bloody cravings produced by exposure to Fanning’s condition. Perhaps – he muses – if they were to try it on a child..? Aware of the ethical problems but facing a potential pandemic already claiming thousands of lives, the decision to find a young girl with no ties or anyone to miss her is made.

Hundreds of miles away young Amy Belafonte (Saniyya Sidney), a smart and self-reliant child loses her mother to a drugs overdose and finds herself in an uncaring foster system. She also, unknowingly, finds herself on Project Noah’s radar.  They’ve sent two operatives to bring her to them. One of them, Brad Wolgast (Mark-Paul Gosselaar) has never had a problem bringing the Death Row inmates to the centre. He doesn’t know what goes on below and doesn’t want to.

But three years ago his daughter was killed and now, the order to essentially kidnap an innocent girl makes him question his involvement.  It’s time for both Amy and Brad to make some fateful choices that may not just impact them, but the entire world…

The danger with even the most interesting series concepts is that after an initial injection of creativity and an excellent pitch, they rapidly lose their way in delivering continuing satisfaction and flail around for a sense of both direction and artificial momentum.  So it’s interesting that though there’s a great deal of set-up in this pilot episode of FOX‘s latest primetime hope – and a familiar formula – it somewhat bucks the trend of veering too far in one of two directions: either unleashing everything all at once or being TOO mysterious and inferring everything rather than presenting. Instead, to its credit, The Passage walks that careful line of introducing us to its basic core ideas and some consequences, but not trying to be a self-contained mini-movie that shows its best cards too early. To its credit, by the end of the first hour you know the primary characters and the general concept and have the familiar fugitive status established (though, it’s nice that our hero Brad actively tries to sensibly and practically find a way to avoid it) , but there’s still plenty of questions to address and connective tissue to be knitted together. The fact that the story is based on a trilogy of books allows for the fact there’s an existing game-plan which will shape up as move forward.

However, there are some massive caveats to that praise. Not everything in the execution is quite as smooth. Some of the exposition and story short-cuts prove awkward. Setting up the fact that Brad is estranged from his ex-wife and that his daughter was killed (for which he blames himself, though his ex doesn’t) has some bits of truly clunky dialogue to get out of the way (and one has to wonder what kind of genius scientist actively selects a guy who tragically lost his daughter for a mission that involves kidnapping a young girl to be experimented upon?) and Brad’s military service is addressed with a blunt ‘You two served together, didn’t you?‘ – ‘Yeah, he has 98 confirmed kills and was awarded a silver heart!‘ level of blunt force trauma’d exposition.  Anyone who has read the trilogy by Justin Cronin will likely bemoan the loss of scope and shorthand nuance with plenty of changes to characters and situations. The source material skipped backwards and forwards viewing events in the timeline of cause and effect and, yes, there’s some of that here – a now almost de rigeur all-knowing Amy as narrator telling us how important the events we’re witnessing will prove in the long term and news reports of a pandemic that could, it coyly offers be a scary enough reason for our scientists to lurch over ethical boundaries and still sleep at night – but in these early narrative stages such elements feel like potentially interesting sign-posting and context-punctuation rather than actual imperatives in the moment.

Though he went on to star in such grittier shows as NYPD Blue Mark-Paul Gosselaar may never truly escape the long shadow of his 1980s role as Zack Miller in  camp comedy Saved by the Bell. But he makes a solid and morally upstanding agent, he of chiseled jaw, stoic values and gritty determination, largely because the script tells us so at every opportunity and because, hey, ‘Zack Morris’ would never steer us wrong.

But it’s Saniyya Sidney as Amy Belafonte that’s the heart of the piece. Sassy kids are another difficult element to balance, their script often feeling like exactly what it is – adults writing knowing dialogue for unknowing youth. But here Sydney delivers a performance that feels more organically world-weary after Amy’s own losses. The awkward, sometimes bristling trust that develops between her and Brad has good familial chemistry and anchors proceedings without ever slipping into abject sentiment.  ‘You have an ex-wife?’ says Brad’s less scrupulous, less in-the-loop fellow-kidnapper. ‘What other kind of wife would he have?’ offers Amy with a glance towards the perpertually frowning driver with perfectly-timed snark.

The Passage doesn’t break the mold or push too hard at its boundaries – and fits firmly into a comfortable primetime groove and format. In a schedule already clotting with vampires and the undead, it feels like a show that could have something interesting to say and has some talent there to say it… but one which is struggling against a syntax and vocabulary that may be happy to settle for less. Right now, it could go either way. Still… any show willing to have a budget for blood but none for sparkle has something going for it and there’s enough innate potential in the pilot to suggest that there’s room for growth… 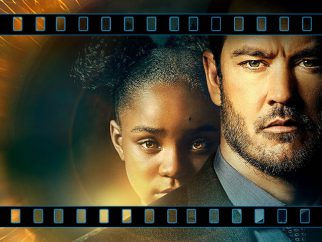