Do Not Resuscitate: Reeves’s ‘Replicas’ DNA drama is DOA…

Too po-faced to be a comedy, too lazy to be an effective thriller, 'Replicas' looks to reproduce some classic sci-fi tropes and fails to find a pulse...

William Foster (Keanu Reeves) and  Ed (Thomas Middleditch) are scientists working on transferring the human consciousness into new synthetic hosts, but their efforts have hit a brick-wall and their funding from Bionyne’s  head honcho Jones (John Ortiz) is about to dry up. Despite the warnings from his wife Mona (Alice Eve), who expresses concern over the morality of the method, Foster is determined to find the answers. But when the family is involved in a car-crash, of which he is the sole survivor, Will makes a desperate decision to restore his family.

However the process is far from guaranteed to work and will take over two weeks to complete. With three pods and four fatalities, Will and Ed are going to face not only a hard choice but the job of hiding their efforts and the realisation that playing God may still have some serious consequences…

The Replicas title gives a foreboding indication of how original the finished film will be and, yes, lo and behold, this feels like a late 80s or early 90s movie script that’s being found gathering dust on a shelf and then been given a quick once-over to add some 21st century terms. Far too quickly.

Even with the suspension of disbelief needed for the genre, these kind of movies pivot on script-necessary bad decisions made by sympathetic characters and then some sense of internal logic as they deal with the consequences. But here Keanu Reeves plays one of the most all-round, dumbest supposed-geniuses we’ve seen in movies for quite a while. William Foster is not only devoid of a sensible work ethic but fumbles through a story with such ineptitude on every level that it makes it impossible to believe in him as a functioning human being. He’s demonstrably incapable of handling any kind of rational decision-making at home or work. For a scientist at a cutting-edge facility, he merely postures, whines, barks a few technobabble commands and when he does make any decision it’s bad and blatantly ill-conceived. It’s a level of incompetency that can’t even be excused by basic arrogance, as William stumbles around demanding other people find his answers and then passive-aggressively mopes through the aftermath. Frankly, it’s hard to find any real sympathy or empathy.

Proceedings aren’t helped by essentially making Foster’s family so bland and uninteresting. Alice Eve, capable of far more, merely simpers and frowns as the truth of what’s happened is revealed,  Emjay Anthony has a handful of lines as generic son Matt, Aria Lyric Leabu is youngest daughter Zoe, the the misplaced maguffin of the piece – though the casting of Emily Alyn Lind as daughter Sophie looks like a genuine triumph of familial DNA-cloned casting otherwise missed by the film. At least Thomas Middleditch (best known for US show Silicon Valley and his Verizon-ads) appears to be aware he’s in a turkey and gobbles up the few choice funny lines.

There are so many aspects of the central idea that could have been explored better.  The horrible choice that William has to make about who doesn’t get brought back should have real weight, but after a few scenes of despair that don’t even come close to John Wick levels of angst –  and yet another bizarre decision – it instead it becomes little more than the fault-line to trip up William’s already clumsily-covered tracks. The absence of Mona, Sophie, Zoe and Matt for two unannounced weeks should be a huge deal, but is addressed by a scene where William fakes some texts (there’s even an attempt at humour) and ominous visits from teachers and cops looking skeptically at the front door that ultimately go nowhere and fail to generate real tension. More bizarrely, far too little effort is made to explain that missing time to the family themselves – another example of  ‘stable genius’ William essentially making things up as he goes along and the film ignoring the gaping plot-holes that would exist within its tale.

The last act of the film feels like a desperate ‘Hail Mary’ rewrite, the Powers That Be suddenly recognising how dull and unlikely proceedings have become and throwing what’s left of the budget towards an action movie that looks to replicate/homage/unapologetically rip-off some I, Robot CGI (though with far  less successful CGI than the 2004 film itself).

Jeffrey Nachmanoff has penned the likes of  The Day After Tomorrow and Traitor, but his directing work has mostly been on television and here he delivers a movie-of-the-week journeyman effort. A B-List movie with a C-List script, Replicas is a lazy, uninspired effort derivative of countless superior films. (It’s as if Reeves saw Johnny Depp’s equally-unlikely AI movie Transcendence and said ‘Dude, Hold my beer!‘). Without Reeves  – who can ably deliver good stuff when presented with decent material – and Eve in its cast would likely have bypassed its cinematic release this week (wisely delayed from mid-2018 to the graveyard of 2019’s opening weeks) and gone straight to DVD or on-demand platforms where it could act as repetitive filler. One suspects it will be quickly resurrected that way and still struggle to find its pulse.

Replicas in now on general release in the US. No UK release has been announced. 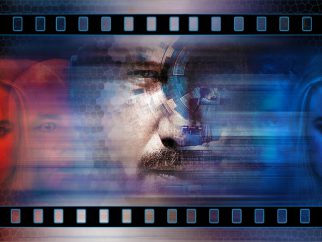 Pacino is on ‘The Hunt’ for Nazis in tv series debut…