The Christmas holidays saw a reworking of Agatha Christie's Poirot. But was this a Herculean effort or a reinvention too far..?

England, 1933: In Andover, a woman named  Alice Asher doesn’t answer the door of her store but it will be some time before her violent death is public knowledge. A short time later, Betty Barnard from Bexhill, a bed-hopping social-climber is found butchered. The police become aware of the foul play but bristle when retired, but not retiring Hercule Poirot (John Malkovich) tells them he has been getting carefully typed letters from an unknown source… messages that seem to warn him of, then make claim to, the dastardly deeds.

The police don’t believe Poirot, whom new young Detective Crome (Rupert Grint) sees as an embarrassment to the service (a civilian solving crimes faster than the police… and a bloody foreigner, as well? No, that’s not good for their image!). By the time they realise that the veteran  does have some unique connection and insight, it may not do them much good. Crome doesn’t have the answers, but he has some good questions. Such as how does the apparent murderer know so much about the Belgian sleuth… and why is there no record of a detective named Hercule Poirot in Belgium before his arrival in England?

As a stocking salesman named Cust (Eamon Farren) quietly makes plans that involve blood and pain, Poirot and the police race to piece together the mystery that could lead to an estate run by Sir Carmichael Clark. But will Poirot be able to reach his old friend in time?

The re-inventing and deconstruction of existing literary characters has long been a popular strategy – with modern creators wanting to put their finger-prints onto older concepts and icons that can date back years, decades and sometimes centuries… and these sometimes go beyond merely retelling older stories in new settings or working within the existing framework and into wholesale reinvention. But that can be a double-edged sword. The result can be a refreshing, interesting change and a previously unexplored vision or it can simply end up as an ill-advised mash-up that says more about the production helmer than the production itself. There’s a real danger that what already exists and what the new creative want to say are not always as compatible as desired or required.

The problem with this latest Poirot is that he’s not Poirot – almost literally. The short Belgian with the highly-intuitive sense of observation, the famous waxed, black moustache and the clipped manner  is now a tall, grey and overtly religious Belgian reduced to entertaining the elite at a dwindling number of dinner-parties, dreaming visions of a previous role he’d like to forget and hiding the fact that he may not be – or have ever been – quite the person he presented to others.  An astute detective arguably past his prime and yet needing to flex his muscles is potentially fertile ground to explore on an emotional level (Sir Ian McKellen was excellent in similar, if more whimsical territory for  Mr. Holmes) but it also dilutes the detective directive.

The mecurical Malkovich (also currently on show in Netflix‘s Bird Box) is always fun to watch and a role where he’s something of an outlier – standing just a little off from everyone else, thinking differently and judging them – is a familiar aspect that he’s mastered in one form or another. The difference in stature between actor and character is also not a major obstacle (it’s worth noting that before the six-foot-and-change Hugh Jackman became synonymous with Wolverine, the comic-book character had often been depicted as a short and stocky brawler more akin to a younger Bob Hoskins). The greying hair is also addressed as a simple result of aging. All fair enough.  But in giving Poirot a background that questions his career choice, his motivations and a religiously-hued guilt that has never been a formative part of Christie’s creation to date, the result quickly edges us away from the Poirot we expect into a story in which the traits are just occasional punctuation, an artifice rather than a character.

The supporting cast all know their respective places and positions in a Christie story and act with Downton Abbey-like diligence. No matter how hard he tries, Rupert Grint will always be associated with Ron and Harry Potter and a ginger moustache perched on his stiff upper lip can only do so much to hide that and try to age him up. That being said, Grint is also fine in playing out a rather template one-step-behind copper who is frustrated by Poirot rather than disliking him with the zeal of some of his colleagues – though the growing xenophobia in the country is an interesting background, if hardly a subtle mirror to modern times. Tara Fitzgerald is also a reliable go-to for aristocratic ladies, Freya Mavor (The White Queen) plays a seductive secretary with gusto and Broadchurch‘s Andrew Buchan is the estate owner enamoured of Poirot’s past successes. Elsewhere Shirley Henderson meanders through as a sleazy mother-turned-pimp to her ethereal daughter (Anya Charlotra – soon to be seen in The Witcher series) and Bronwyn James plays a put-upon sibling with nicely understated frustration. But it’s Eamon Farren (the Twin Peaks revamp and also appearing in The Witcher) as Alexandre Bonapart Cust who initially absolutely makes the most of his serpentine fugitive salesman, a man confused by his own apparent blackouts and repeatedly waking up near crime scenes.

The ABC Murders, is diverting enough – ticking all the period drama boxes and appropriating the mystery-genre format as needed – and very loosely adapts from Christie’s 1936-published source material, enough to please or annoy depending on your allegiance to the original. But it feels like an uneven mix, half -relying on Christie’s rigid and very proper framework and yet wanting something more visceral and sordid like The Alienist and so never quite satisfying either while trying to satiate both.

As a complex man in shifting cultural times, Malkovich’s detective is an interesting creation in and of itself and the idea of showing the three-part The ABC Murders over three consecutive seasonal nights on the BBC was a wise one – but while this crime and crumpets story was a diverting enough time-killer to get the blood pumping between tea and supper, one suspects that David Suchet probably isn’t losing any sleep over his credentials being usurped any time soon.

The ABC Murders was broadcast on the BBC in the UK over Christmas and will make its US debut via Amazon Prime Video on 1st February. 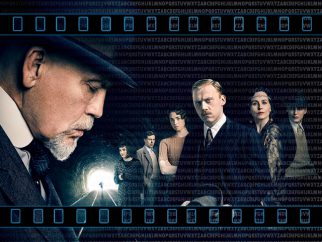