The clock has stopped and after two last-minute renewals 'Timeless' ends its history-changing missions...

Rufus (Malcolm Barrett) is dead, but if the ‘Lifeboat’ team of Wyatt (Matt Lanter), Lucy (Abigail Spencer), Jiya (Claudia Doumet), Garcia Flynn (Goran Visnjic), Connor Mason (Paterson Joseph) and Agent Denise Christopher (Sakina Jaffrey) are going to change that, they’re going to need to heed a warning from the future and avoid the final, desperate machinations of what’s left of the Rittenhouse agenda to scatter influence and power through the previous decades and centuries.  As a more base and power-driven Emma Whitmore (Annie Wersching) tries to consolidate her money and position of power, she sets in motion a trap that should finally thwart any and all plans to stop her.

But with three time-ships now in operation and the stakes higher than ever before, just what will everyone involved be prepared to do to accomplish their vision of the way they believe the world should be – and what losses will be needed for the greater good?

Right now, you can’t shake a sundial without tripping over shows about time-travel. Doctor Who finished its recent run a few weeks ago and will have a New Year’s Special, Travelers recently returned to Netflix (our review is also incoming) and this week saw the final send-off for NBC‘s Timeless – a show that commanded a fanbase that was passionate enough to secure a ‘farewell’ tv movie that wrapped up considerable storylines left dangling after the series was cancelled after two seasons (having been brought back by the skin of its primetime teeth after its first run)

Timeless always had a more…. fluid and free-range approach to its mythology than other series. While most time-travel shows have the remit of righting what once went wrong or making sure that no-one messed with existing history, this was a series that for all those similar claims, always seemed far less bothered with keeping things straight and the internal rules seemed somewhat pliable.  (Indeed, in a review for Impact several years ago, I humbly suggested that this was a television show’s writing room most desperately in need of a more consistent series bible).  On almost a weekly basis, lives may have been saved and Rittenhouse’s maniacal plans somewhat tempered or stalled, but more often than not something significant was changed.  The fatalities in the crash of the Hindenburg were vastly reduced;  President Kennedy was assassinated, but in Austin not in Dallas… even the term ‘witch-hunt’ was wiped from the dictionary after the Salem Witch Trials were thwarted. (The White House has no comment on their feelings on that).

The tv movie came about because of the passion of the show’s fans and because the previous season’s cliffhanger would have been cruel and unusual to be the final word on matters. Equally, the cast seemed equally invested in a proper wrap-up. They were all out of contract and moving on to other work, but everyone made the maximum effort to arrange schedules so they’d all be available.  But even the most committed fan or ‘Clockstopper’ would probably acknowledge that the two-hour running timed finale (including commercials) was a mixed bag. It was clear that a story that would have been far more satisfyingly played out over a third season was crammed into around ninety real minutes and that meant a lot of hasty dot-joining and resolutions – and possibly not the ones originally intended.   That being said, it proved to have more satisfying (if sometimes convenient) closure than one might have expected as it whooshed through a checklist of ‘to-dos’ and by the time the final credits ran, a fair amount of dangling threads had been tied up.  Wyatt’s duplicitous ‘ex’ Jessica and her pregnancy turned out to be a ruse and Flynn sacrificed himself by crossing his own time-line to kill Jessica on the day she was originally murdered all those years ago  (before Rittenhouse went back and ‘saved’ her to act as an agent). This either set the time-line on a new course or was always what happened originally and we just didn’t know the full specifics. Either way, Jessica’s recent activities were rendered null and void and Rufus is suddenly back and as far as he’s concerned he never died anyway! (Result!). With three time-machines in play (the Rittenhouse ‘mothership’, the heroes usual ‘Lifeboat’ and the now enhanced future version of the latter model, our heroes managed to snatch victory from the eras of the Californian Gold Rush rebels and the rise of North Korea…. and the show’s ‘shippers largely got what they wanted (including a satisfying epilogue from the near future) and there was just a slither enough of two final scenes to firstly book-end one of the show’s major storylines involving Lucy’s diary and an opportunity to perhaps pick up the story for more if everyone wanted to at a later date.

There will still be those calling for Timeless to return in some shape or form but it might well serve its legacy better to leave things as they now are. It was an inperfect and inconsistent show, but equally huge fun and a callback to the Saturday Morning series of old with its sense of derring-do/does/didn’t/will-do. If it had continued further, the show could and probably would have easily collapsed under its own narrative weight and in a world where it came back from the dead twice before, perhaps a trinity would be pushing luck and time too far.

Still, it’s great that the show got the send-off it deserved and it was a guilty pleasure worth waiting for. 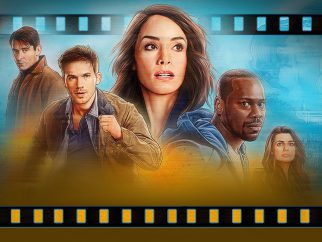